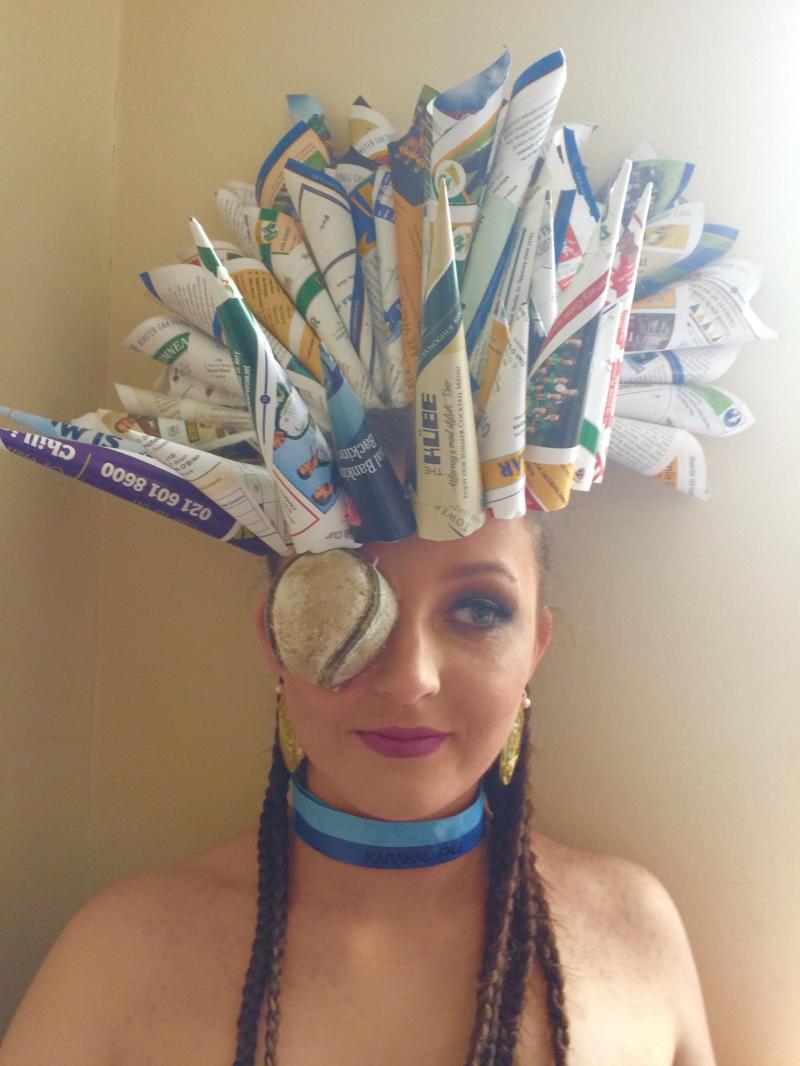 Fifteen creative outfits pieced together by innovative Tipperary students have made it to the Southern Regional Final of Junk Kouture.

Students from St. Anne’s (Tipperary Town), Comeragh College (Carrick-on-Suir), Clonmel’s Loreto, Presentation and CBS High School, Patrician (Fethard), and the Ursuline Convent and Presentation in Thurles  will represent their schools on the catwalk at the sold out University Concert Hall in Limerick on Friday 10th March.

The Tipperary designers will be looking to book their place in the Grand Final, which takes place at the 3Arena in Dublin on Thursday 27th April, where local singing sensation Una Foden and music mogul Louis Walsh are set to join the judging panel. 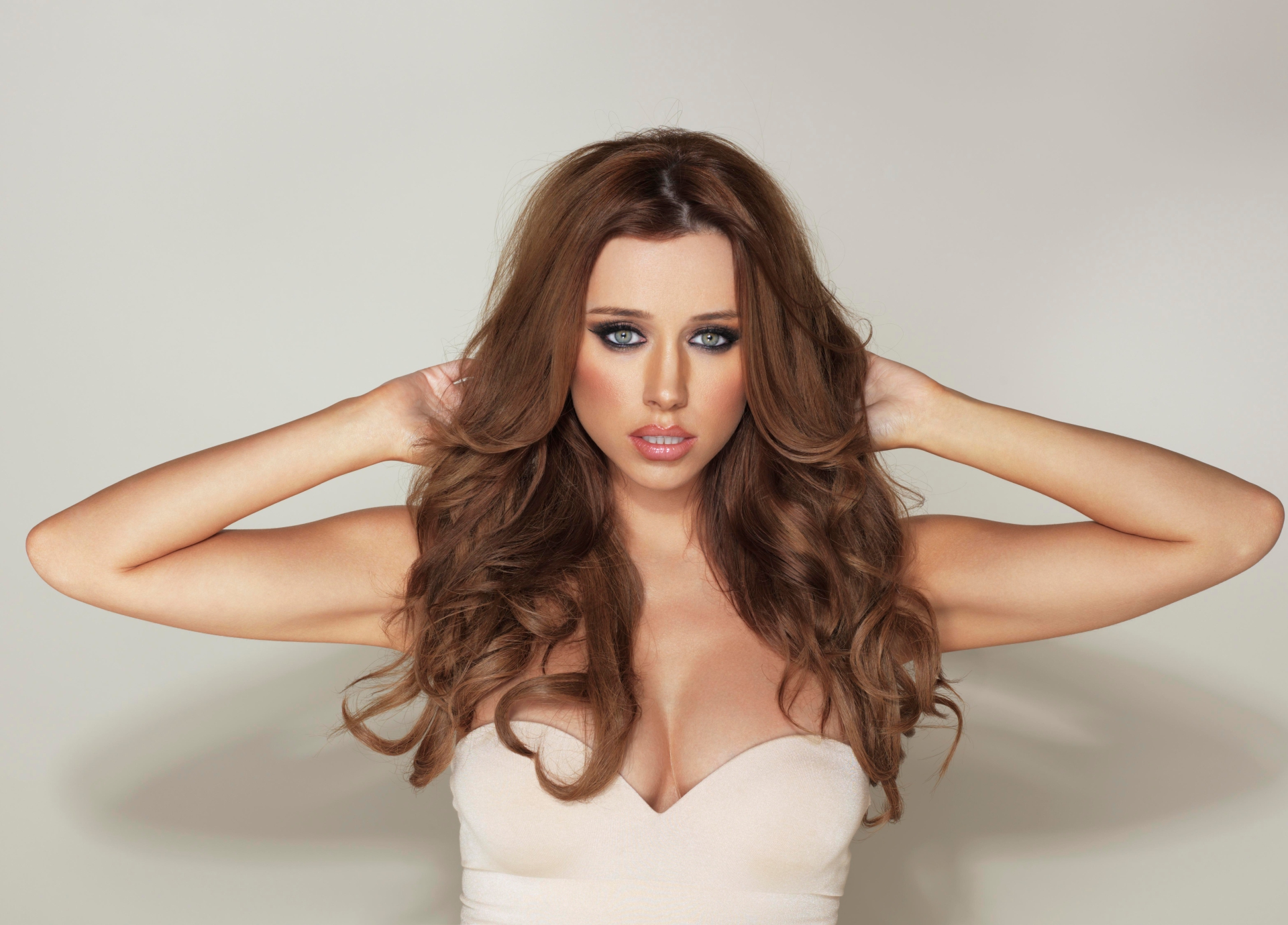 Tipperary born Una Foden (née Healy) is set to join the judging panel at the 3Arena.

The Tipperary designs are live on the BOIstudents Facebook page RIGHT NOW and you can place your vote up until midnight on Friday 24th February. Votes count for 10% of their final grade, with the other 90% being awarded by a panel of judges at the Southern Regional Final. Approximately 20 designs will make it through to the Grand Final from each of the four regions as chosen by the judges. 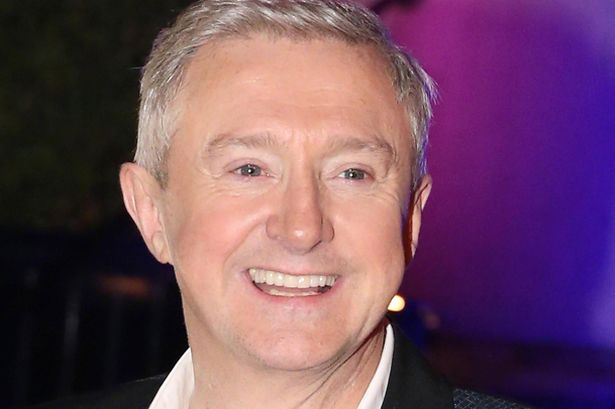 Below are the Tipperary contenders who are set to dazzle at the fashion extravaganza.

Two designs by transition year students at Patrician Presentation Secondary School in Fethard will be showcased on the catwalk at the Southern Regional Final.

‘Amours’ Reign’ was designed by Amy Byrne, Lucy Whyte and Noelle O’Meara. The design, centred on love and romance, will be modelled by Amy. It consists of thousands of hearts cut from card, paper and tin that were made into flower shapes and placed on the dress. Using recycled plastic, the students worked on the headpiece, firstly by getting inspiration from admiring hats by Stephen Jones and Philip Treacy. A great deal of newspaper was used in the skirts before the final assemblage of the romantic red carpet evening gown. 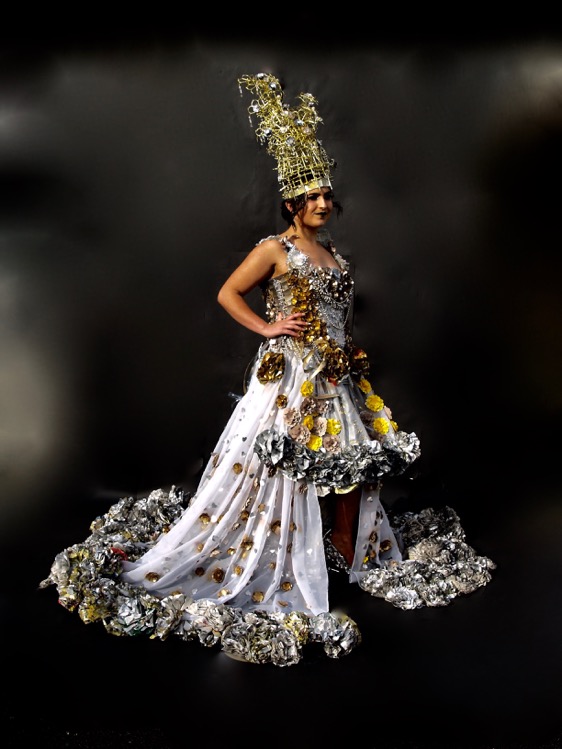 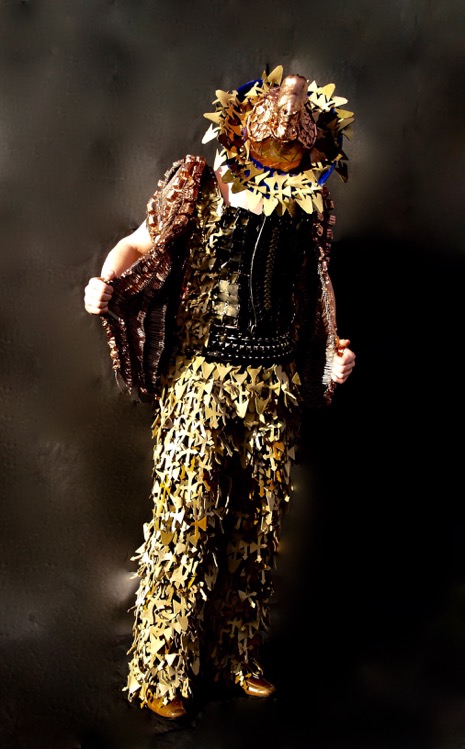 ‘Woven Warrior’ is the brainchild of transition year students Amy Lonergan and Eimear O’ Connor. The dress, made from building strapping and briquette ties, interlaces a network of strapping to create a weave. Afterwards the students spray-painted the outfit, allowing it to become a more wearable modern fashion piece. Amy will model the recycled outfit for 90 seconds on the catwalk at the University Concert Hall and the students are currently working on a dance routine for the catwalk intent on impressing the judging panel. 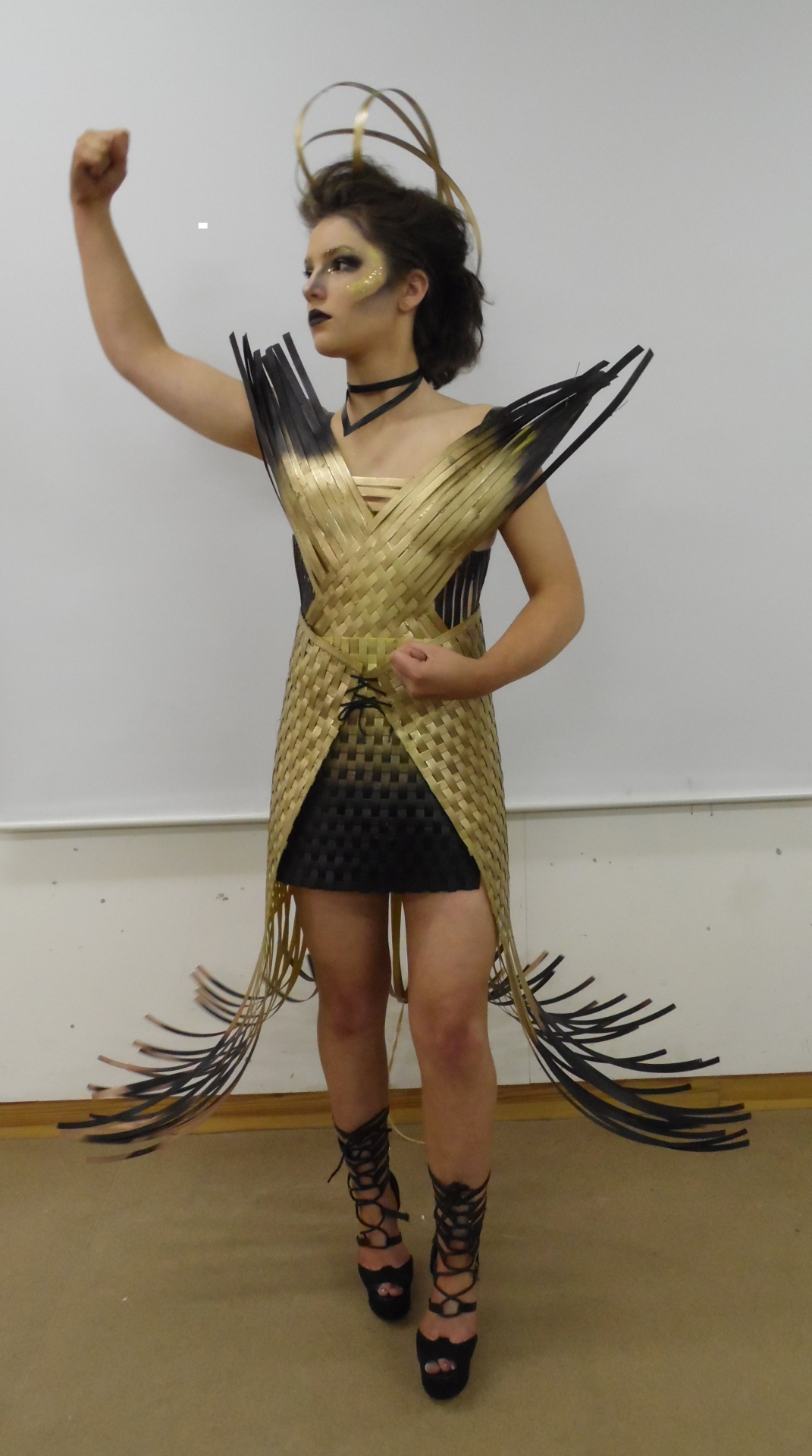 CBS High School in Clonmel’s ‘Eye see what you did there’ was the design of transition year students Andy Higgins, Ben Lonergan and Cathal McGuigan. They created the spectacular suit from old broken spectacles, contact lenses and contact lens containers. They are hoping to steal the show at the Southern Regional Final in Limerick.

Ben Lonergan modelling ‘Eye see what you did there'.

'Kamuro' was put together by Ursuline Secondary School students Winona Ryan, Sarah Ryan and Roisin Heffernan (model). They have been working on the kouture outfit since the beginning of the school year, piecing together broken hoola hoops, burnt matches, coloured wrapping and discarded vinyl records. 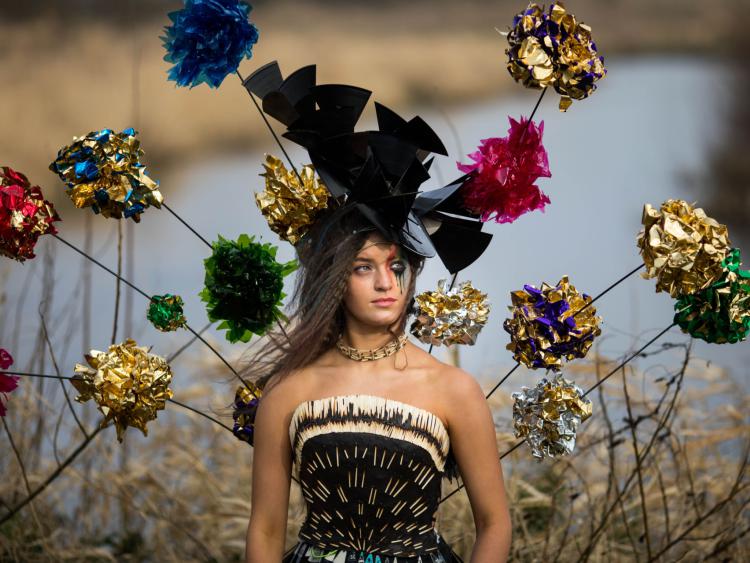 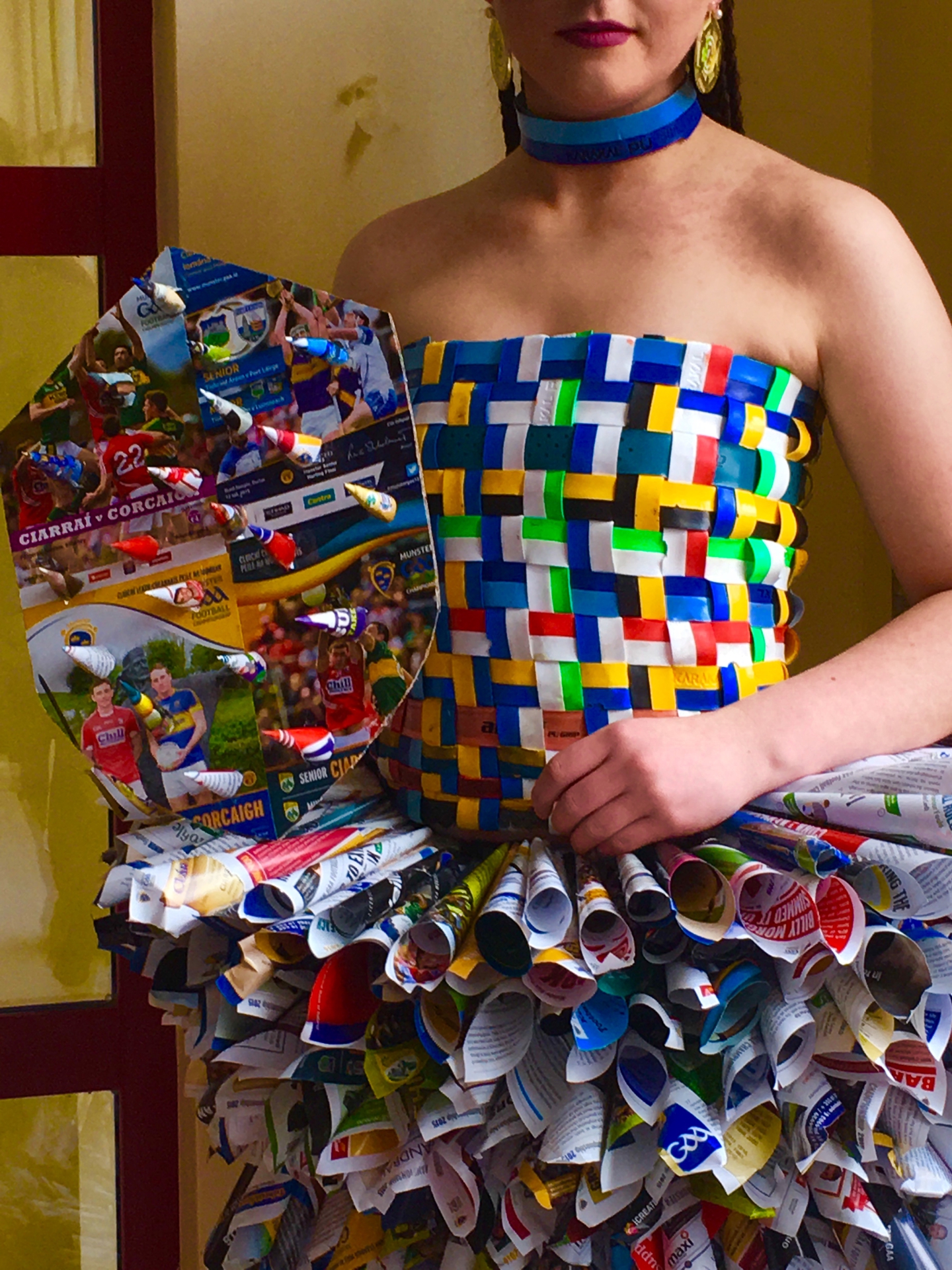 Aoife Butler modelling 'Get a Grip!'

Designed by Síne Landers, Ana Paula Cusnaider and Jade Ryan (model), ‘Floribus Mori’ (Flowers Dying) consists of donated fabrics, forgotten fashion, wool and sticks. It was inspired by the students passion for the environment and global warming. The back of the costume reflects decay, gloom, dark and lacks hope, while the front shows colour, growth and optimism. 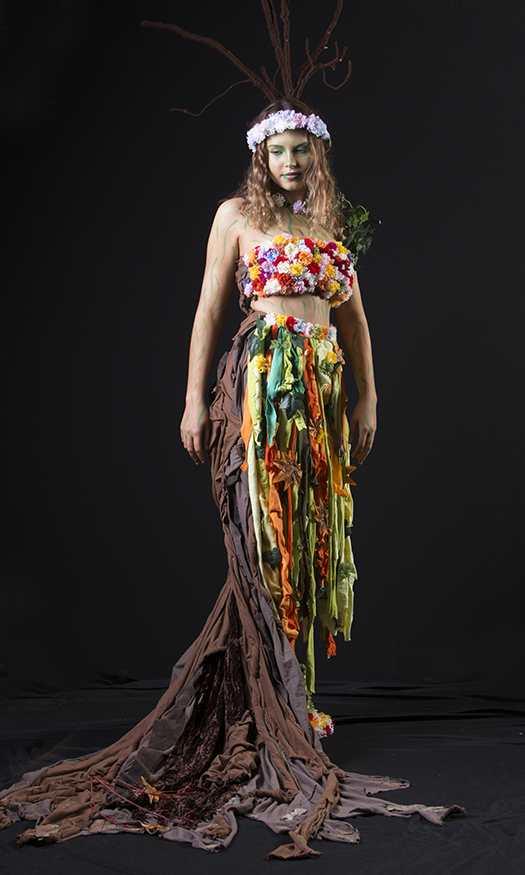 ‘Barista’ was designed by Louise Bourke. The school’s love of coffee proved a winner for this enterprising transition year student who gathered over 2,000 used coffee pods and assembled, shaped and transformed each pod into an elegant full length gown fit for any red carpet event. 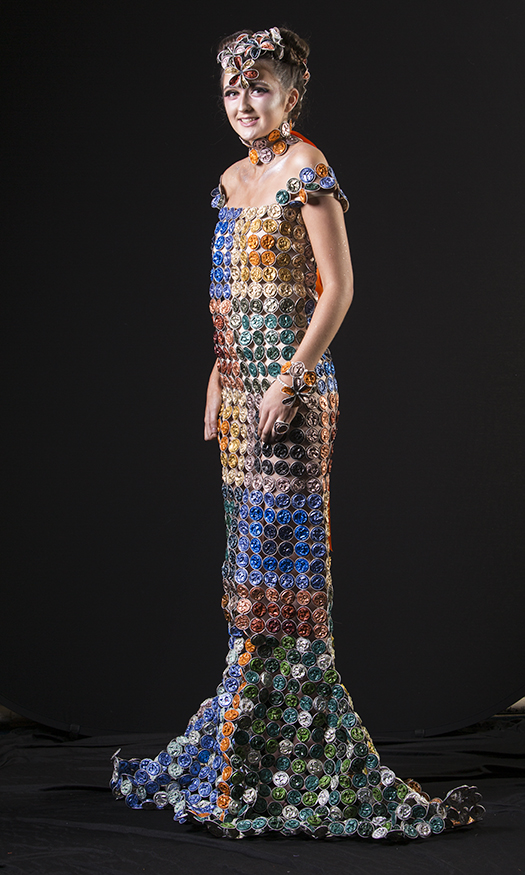 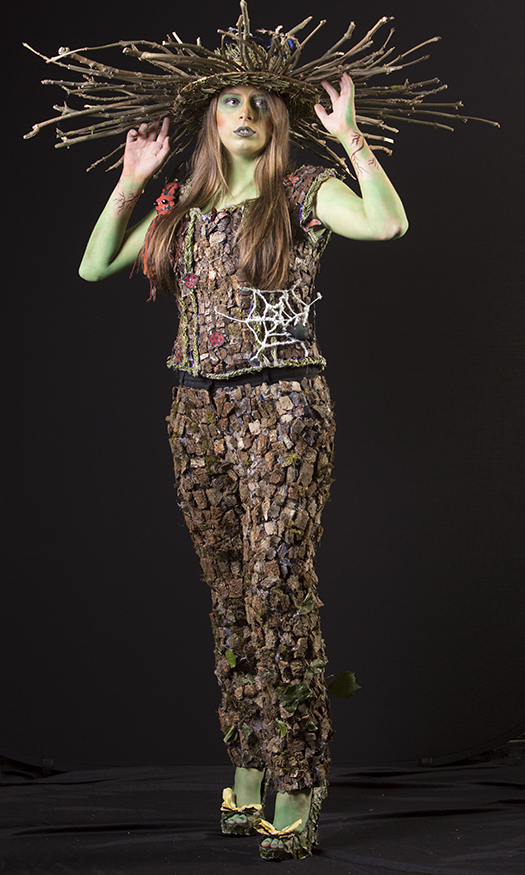 ‘Artemis’ is the brainchild of Keyara Connolly, Michelle Coyle and Rebecca Maunsell. They were inspired by Artemis, the goddess of the hunt and one of the most respected ancient Greek goddesses. The costume reflects animal prints with fur embellishing a dress made entirely from tree bark and twigs. The jewellery centres on the Iron Age, made from conkers, broken jewellery and chains.

Natasha Holmes, Roisin Nolan and Emer Ryan (model) created ‘Rise like a Phoenix’. The bright dress represents hope in a globalising world where mass production jeopardises the future of smaller producers. The costume was entirely made from orange and lemon nets,  orange rope and a Halloween costume. 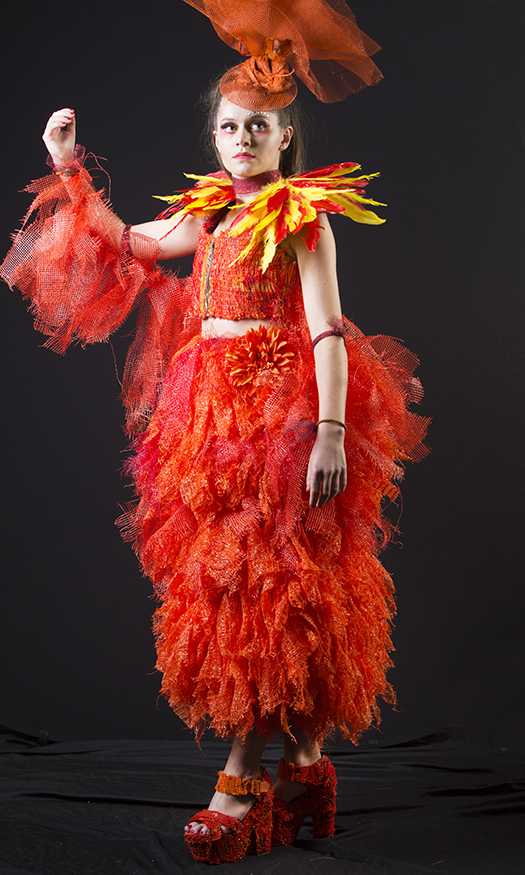 ‘Amarillo Starlight’ was designed by Aoife Walsh, Lorna Fennessy (model) and Hayley Kennedy using hundreds of old Christmas tree lights, milk cartons, decorations and electrical wires. The costume was inspired by the beauty and detail found in exotic flowers enhanced by lights and shapes to illuminate its natural beauty. It was also influenced by current fashion trends and strong female leaders, highlighting their strength, courage and exposing their fragility and natural beauty. 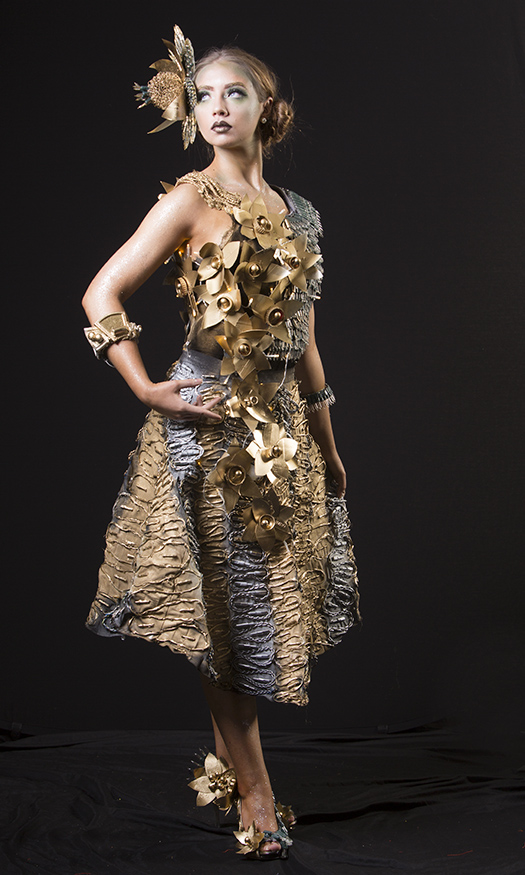 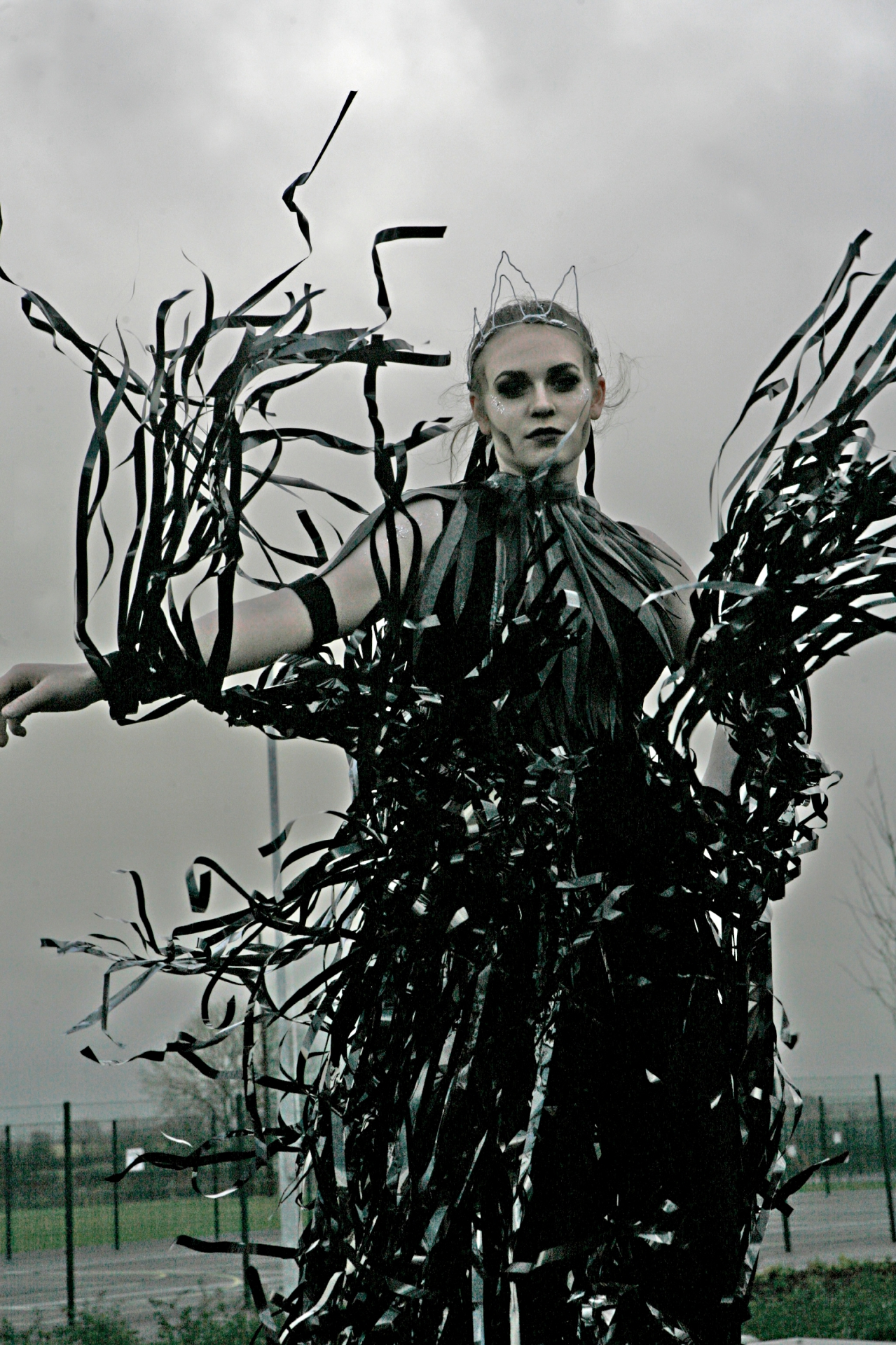 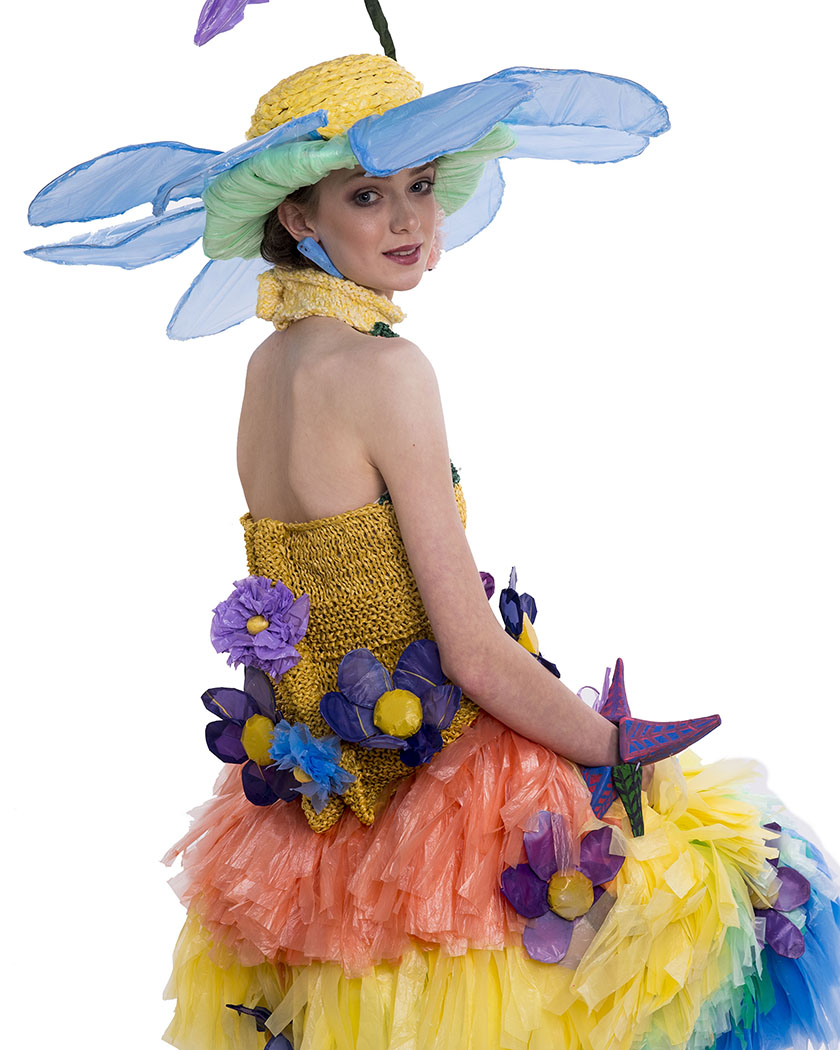 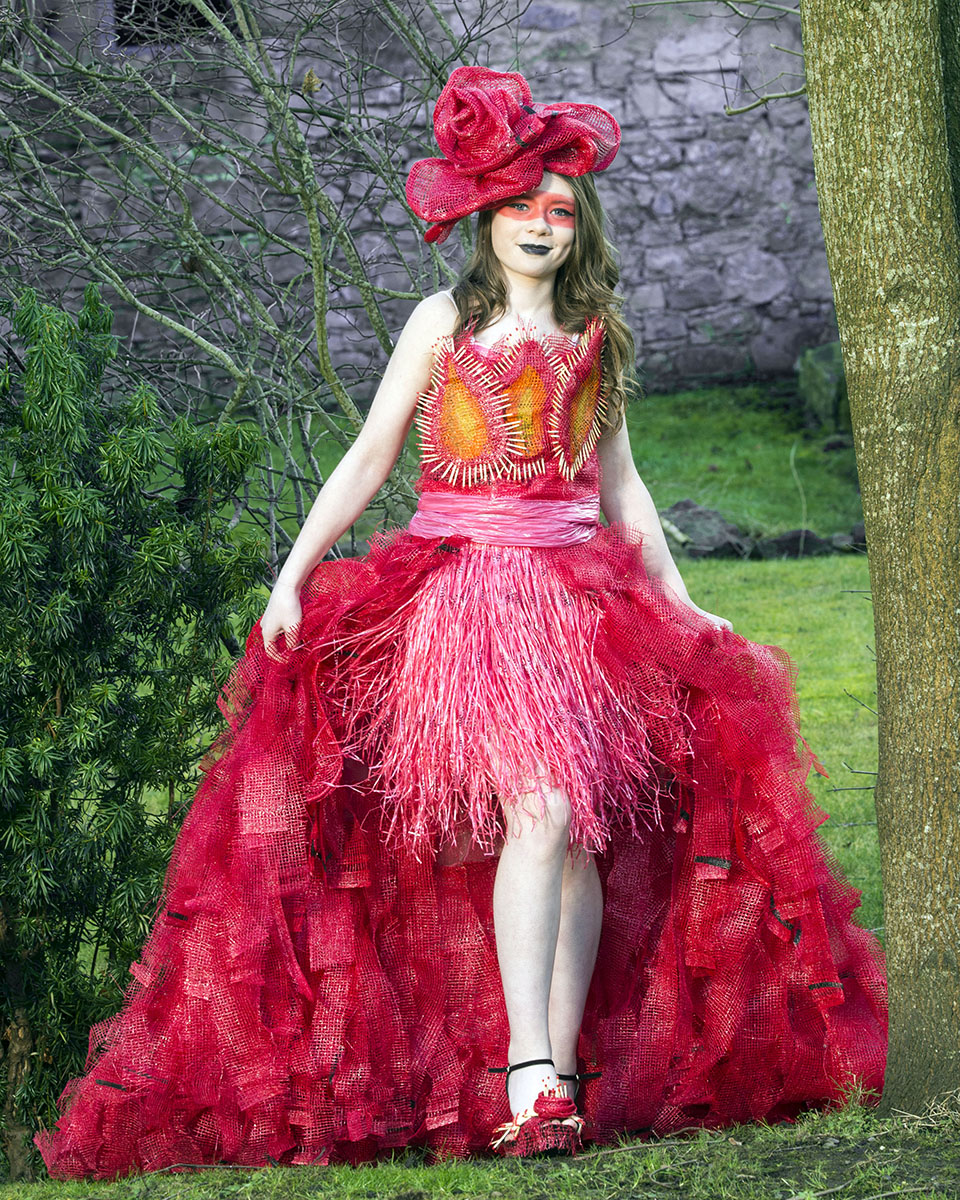 PRIZES UP FOR GRABS!

The record breaking near 1,300 Junk Kouture entries this year has made the judging process the toughest yet. Students will be competing for a chance to win a top prize of €2,500 for their school, iPad Minis and €500 cash for their team. This year’s contestants could be in with a chance of winning a trip to the Royal Film Premiere in London or a trip to Cannes Film Festival. Two scholarships have also been added to this year’s prize pool for Limerick School of Art and Design and Griffith College in Dublin.