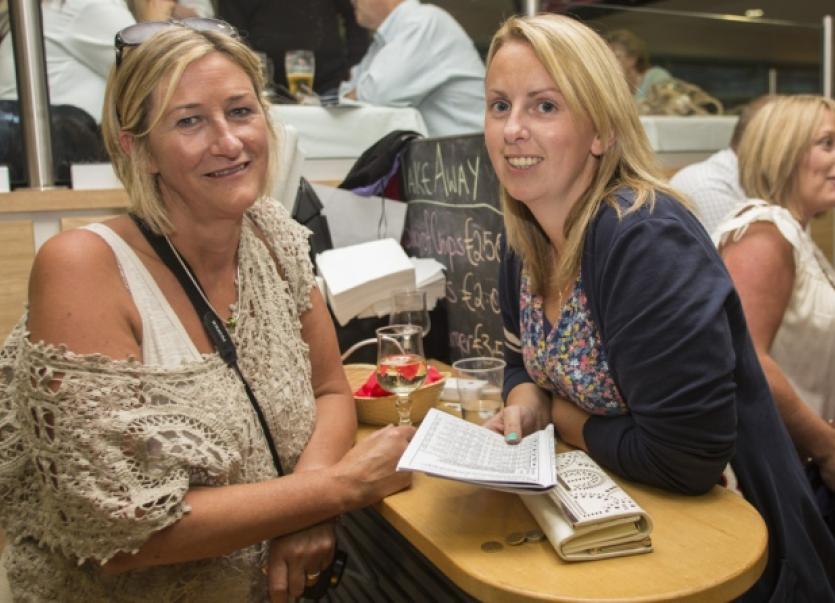 The main emphasis, however, was on the bitch stake, which carries a cracking â‚¬3,450 first prize, and with the leading contenders all advancing to next Sundayâ€™s eagerly awaited decider a superb finale is expected to what has to date been an outstanding and highly popular competition.

Last weekâ€™s very impressive winner Durrow Abbie went to traps the even money favourite for the opening leg and she had her supporters in good voice from the outsetby breaking in front on the rails and leading Coolavanny Cushy around the opening bend.

Brunswick Jenny and Airforce Houston gave chase to the leading pair on the back straight and the quartet bunched up approaching the third turn. Airforce Houston looked to have plenty in the tank as she loomed up on the outside on the run to the straight and so it proved, as the daughter of Westmead Hawk and Wee Amy surged clear to win going away by two and a half lengths from Durrow Abbie, with a gallant Brunswick Jenny just a short ahead away in third, a neck ahead of Forrachmore. It proved a very impressive performance from the Owen McKenna trained bitch whose winning clock of 29.09 was recorded on a track that appeared to be running slower than in recent weeks.

Pippy, unbeaten in the stake and a marvellous servant for Thurles owner Mary Kennedy, was the odds-on jolly for the second semi-final and obliged but only just as she had to pull out all the stops to live up to her name and pip leader Southest Suzie on the line by the narrowest of margins. Churchtown Tip took the third qualifying place only half a length back in a rousing finish and the leading trio finished some four lengths clear of the fourth home Trumpers Lexi. Southest Suzie had taken up the running off the opening turns from Churchtown Tip and the order was maintained to the home straight, from where her wide running opponents gave Pippi the opportunity snatch the spoils. The winner was gaining a tenth career success and she stopped the clock in 29.11 to remain unbeaten in the event and continue to be regarded as the one they all have to beat in the final.

On his 20th outing with just a single win to his credit, Leci Larkin gained a well overdue victory in facile style. Brindle Piper was an early leader but gave way to Leci Larkin off the second bend and this local runner, owned and trained by Sean Flack, romped clear to defeat Kenmare Taylor and Cloncunny Ace by six lengths and half a length in 29.55.Race Race 2, S4/S4 300.

Newbridge Lad was in front from traps but Riverside Breda took up the running on the outside off the opening turn and ran on well to defeat Rockaway Beach by two lengths, with the fancied Fawn Champ a length back in third place. Owned by the R-T-and C Syndicate from Athassel Abbey, the winner clocked a smart 16.35 to gain her second success on her third outing and initiate a double on the night for trainer Graham Holland.

Torpeys Ace headed the market but proved a big disappointment, only beating one home. Christys Jade hit the lid from trap five and although Rising Bullet looked a big danger at the penultimate bend Mary McNamaraâ€™s charge responded to the challenge in style and stayed on dourly to account for her rival by a length and a half, with Cloheena Rocco a strong finisher back in third. The winner clocked 30.43 to gain her second career victory.

Christyâ€™s Amber, a litter brother of the previous winner, completed fine back to back victories for Mary McNamara when getting up on the line to account for Express Cara by the narrowest of margins in a thrilling finish. Express Cara finished four and a half lengths clear of the disappointing odds-on favourite Riverside Swift and the winning clock was 29.44.

Garryvoe Jet was another Graham Holland market leader at evens but after Shelbourne Ollie had led on the run up Skywalker Apollo soon took control and was always holding his rivals before accounting for the late flourish of the favourite by a length and a half, with Shelbourne Ollie half a length away in third. Skywalker Apollo is trained by Frances Oâ€™Donnell for Ray Patterson and the son of Royal Impack stopped the clock in 31.58 to gain a sixth career win.

The layers went 3/1 bar the Niall Dunne trained Brae Lane but Dream Come True set out to make all the running, followed by Papa Smurf and the favourite. Papa Smurf hit the front from an improving Chetwynd Lad between the final bends and kept on well to hold his rivalâ€™s sustained challenge by a length, with Dream Come True five and a half lengths away in third place ahead of the disappointing market leader. Papa Smurf was gaining a third career win for co-owners Lotte Orum and Martin Egan and the winning time was 29.19.

The Graham Holland double was completed in fine style by Cabra Ebony, which gained a fifth career win for owner Paddy Scally by making all the running and recording a fastest of the session 29.06. Haughty Oscar challenged at the second last turn but was forced to check and the leader kept on to take the verdict by a length, with Skywalker Legend the same distance back in third ahead of the disappointing favourite Scolari Express.

Run of the Week â€“ Cabra Ebonyâ€™s return to form in posting the fastest time of the weekâ€™s action Suirside.

One to Watch â€“ The A2 575 win of Skywalker Apollo on Sunday left the impression that further improvement awaits and Frances Oâ€™Donnellâ€™s charge looks well worth following.

As one might expect, the concluding Red Mills Slan Abhaile A1 525 Race produced the top performance of an all graded card, run off before a small attendance. An eye-opening last run ensured that Affane Scolari would go off favourite and the 5/4 chance overcame a slow start to lead at the second turn and stay on to hold the strong challenge of Johnnys Legacy by half a length. The pair finished four lengths clear of the early leader and third home Movealong Bolt.

The winner which is owned and trained in Cappoquin by Eamon Uniacke, clocked 29.17 to gain a fourth winning bracket. The success of Affane Scolari completed a treble for Waterford enthusiasts following earlier successes for Rackethall Micko, owned by the Kilmacthomas based The Hungover Four Syndicate and Coolbeg Harry, which returned to winning form by taking The Sporting Press A2 525 for Dungarvan enthusiasts M. Enright and H. Gordon McCartney.

Race 1, A7/A9 525. Travel Aid was the only runner to have broken the 30.00 barrier and was easy to back at 2/1. Thomas McGrathâ€™s charge made all the running to account for Pine Lyric by a length and a half with the odds-on Toss Lily some eleven and a half lengths away in third spot after a troubled run. The winner stopped the clock in 29.78 to break his maiden at the fifth attempt.

The very consistent Fifth Gear was not winning out of turn when making all to defeat a strong finishing Early Lil by a length in 16.61. It proved a career best run for the Joan Cremin trained daughter of Crash. Foinns Ace in the red jacket looked set to take a hand in proceedings when making smooth progress on the rails approaching the opening bend, only to get baulked before running on to take third place. A similar event may soon prove within his grasp.

The only runner not to have won a race, the 3/1 chance Amandas Minx, with nine placed efforts to her credit, at last had her moment of glory when leading from Unknown Buzz at the penultimate bend and surging clear to defeat Kilmurry Cruiser by seven and a half lengths in 29.71. The daughter of Hondo Dingle and Granada Girl is owned in Kilfeacle by Mandy Oâ€™Dwyer and in what is surely a rare occurrence all five remaining runners finished in indian file, each separated by a length and a half.