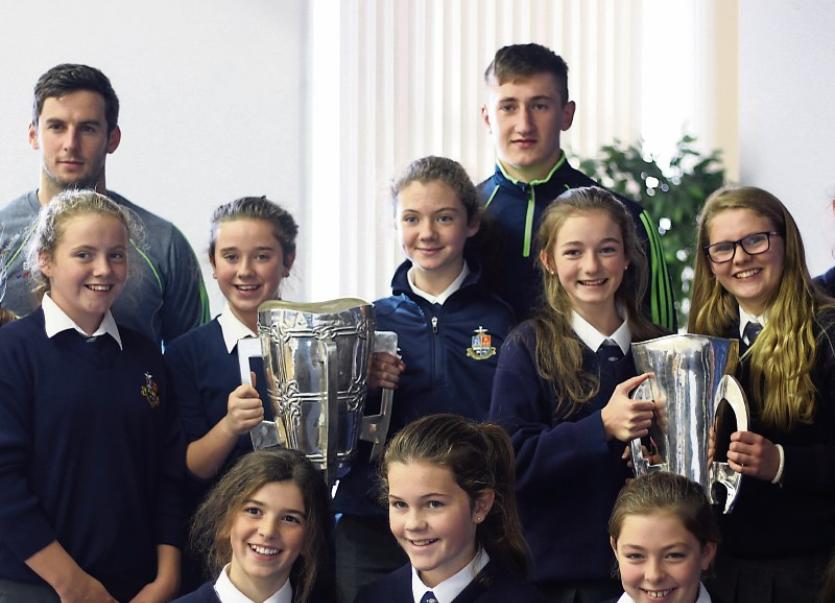 The Liam McCarthy and Irish Press cups have been doing the rounds in recent weeks, to the delight of young and old across South Tipperary.

The children of Our Lady of Mercy Primary School in Cahir wore their Tipperary jerseys with pride when the Liam McCarthy Cup and representatives of the Tipperary team arrived on Friday 14 October. The children gathered in the school hall, entertained by the traditional school musicians who played ‘Kerry Polka’ and ‘Maggie in the Woods’ on their tin whistles. Pupils were accompanied by senior infant teacher Ms. Fiona Doyle on the bodhran and Michael Harty from Cahir Ceoltas on the accordion.

‘Slievenamon’ heralded the arrival of Tipperary senior hurlers Seamus Kennedy, Cathal Barrett and John O’Keeffe, local manager from Cahir Juvenile Club Tommy Barrett, and primary development games officer Kevin Hally. Each of the men spoke with great passion and enthusiasm, promoting GAA in local clubs, schools and communities. They emphasised how training is vital for the strength and future of Tipperary sport.

Johnny B then arrived and performed the “Premier Rap”with Niamh Costigan and Anika Moloney. Johnny B found it difficult to escape the children’s adoration, signing lots of t- shirts and posing for numerous photographs.

There were scenes of great delight in Rockwell on Thursday 20 October last as the cups touched down at the college. The Liam McCarthy Cup was accompanied by Cathal Barrett, while seventh year Rockwell student Mark Kehoe showcased the minor trophy.

Speaking at the special event in front of 450 pupils in the Concert Hall, deputy principal Michael Doyle said Rockwell College was “very privileged” to have the two cups in the school.

“While Rockwell College has always been known for its rugby prowess it also has a strong GAA history to be proud of,” Mr. Doyle continued.

Mr. Doyle added that he “could see a time in the future when Tipperary could win the double’’, before congratulating Cathal Barrett on his recent All-Star nomination.

Cathal Barrett encouraged the students to continue with whatever sport they had taken on, no matter what it is. “Always try to do your best,” he said. Barrett added that he always had a strong interest in rugby and played underage rugby with a number of former students from the school at Thurles RFC. Both All-Ireland winners then posed for photographs with Rockwell students.

In Clonmel, Tipperary senior hurler Séamus Kennedy also brought the cups to the RehabCare resource centre and the Credit Union.