'We're a watched team now, we won't be coming in under the radar anymore' 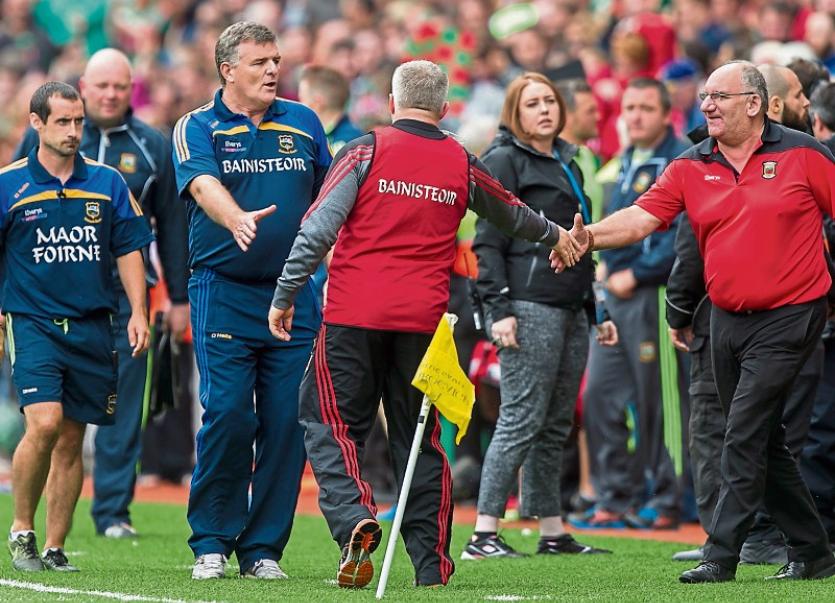 A new year dawns for Tipperary senior footballers on Sunday next, January 8, with an opening round McGrath Cup tie against Kerry in Austin Stack Park, Tralee, throw-in at 2 pm.

This game will be followed by a home tie against Cork just three days later on Wednesday when Tipp will entertain ‘The Rebels’ under lights at Dr. Morris Park, Thurles, (throw-in at 7.30 pm).

As 2017 now begins, when compared to recent years, Tipperary footballers find themselves in a new and somewhat strange place.

Following on from the magnificent exploits of last year’s extraordinary championship run in which they progressed to the All-Ireland semi-finals, Tipperary will now have to mix the perennial sense of hope with the added weight of expectation which comes with being a top side, having recorded championship wins over Cork, Derry and Galway in last year’s campaign.

The panel under manager Liam Kearns have been back in training for about a month now, and when I spoke with team selector, Paul Fitzgerald, he was satisfied enough with the progress and attitude displayed so far.

The former long-serving inter-county goalkeeper, who recently helped his club Fethard back to senior status with a county intermediate title win, pointed out that Tipperary have extended the panel of late as they set out on what they hope will be another long successful year.

“We have Paddy Codd back now after taking last year out. And we also have a few in from the county champions Loughmore including Liam McGrath (captain of the All-Ireland winning minors of 2011), Liam Treacy and Cian and Joey Hennessy. We have added two young players from Moyle Rovers in Luke Boland and Ross Mulcahy and we are glad to have the three who headed to America last summer back, Kevin Fahey, Jason Lonergan (both Commercials) and Liam Casey (Cahir). That’s always good, to keep things fresh and to add a bit more competition for starting places,” said Paul.

Paul went on to say “we are delighted to have Jerome Stack as part of our backroom team for the year ahead. He is a highly-rated football coach who was with Limerick last year and previously worked with Laois and a few clubs back in Kerry. He is a highly respected coach and he brings a fresh voice to the sessions. You can feel the players are already impressed with Jerome’s contribution and seem to have bought into it in a very positive light.”

“We are back at it a few weeks now, training well but it is mostly gym work and strength and conditioning work we are at. We haven’t had any games as such but we are bringing it all together slowly, giving the young lads a chance and giving some tired bodies a rest” said Paul.

“Ian Dowling, the former Munster rugby player, is working well with fitness also, trying to get everyone back slowly. You must remember that last year was a long tough year, longer than ever before. There are a few tired bodies about that we are giving every chance to with players such as Michael Quinlivan, Alan Campbell and Robbie Kiely being given somewhat of a break to recover,” Paul continued.

I put it to Paul that the high achievements of last year now present Tipperary footballers with an unusual weight of expectation - Tipperary are up to No. 5 in the recently published RTE National Rankings of 2016, directly behind Dublin, Mayo, Kerry and Tyrone.

“Yes, it does bring with it that element of expectation which in turns bring pressure in a way following on from last year’s good form. But it is good to be here now and we will be hoping that we can achieve again this year without putting ourselves under unnecessary pressure. We will be obviously hoping for promotion from Division 3 but we feel it will be even more important to get back to a Munster final and back to Croke Park and even back to a semi-final spot. But none of that will be easy, and we are well aware of that,” added Paul.

“We know we’re a watched team now, we won’t be coming in under the radar anymore to meet anyone. But we know what the standards are now, they are set for us, and as a team we will have to keep improving. But all the lads enjoyed playing at that level last year and hopefully we can get back to that level again in 2017.”

“Michael Quinlivan’s All-Star Award and our five nominations certainly helped to raise our profile also, and some of the lads were involved in the All-Stars game in Dubai (Kiely, Acheson, Quinlivan, Sweeney) where one of the teams was managed by Liam. All that helps and we are well respected now as a team,” added Paul.

“But we start the new year now with Kerry and Cork and we are delighted with these games. They will both help get our fitness up again and provide an opportunity to have a look at some guys.”

“It is a great start to the year to take on Kerry and Cork, and unlike during my playing days when Januarys could be a tough time of the year in mentally preparing yourself for the year ahead, there is a great buzz about the camp at the moment and there is a great positivity around the place also. The players understand that what they achieved on the playing fields last year has given them a profile and so much more to aim for this year. They are excited about the coming league and championship. But of course none of that buzz or positivity will make it any easier to achieve results. That will be done only on the field of play,” Paul concluded.