Tipperary prove no match for Cork in McGrath Cup exit 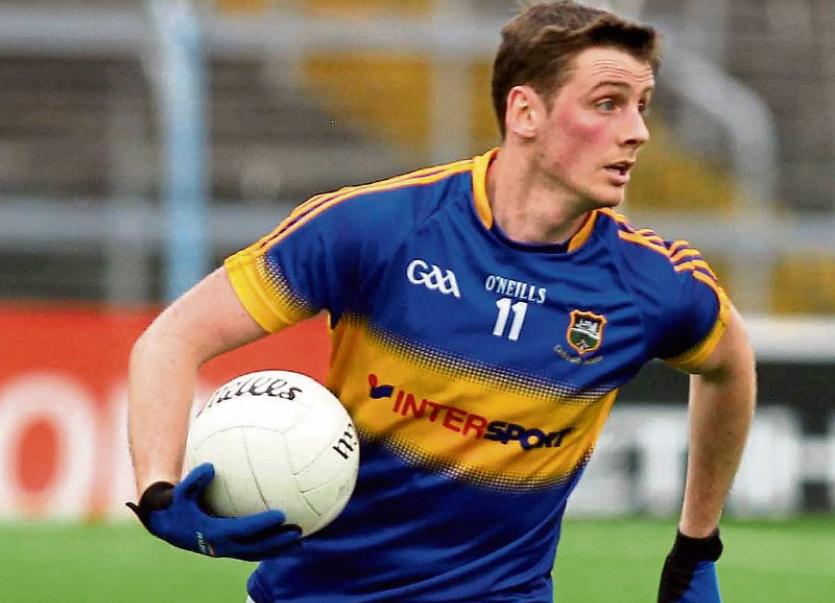 Ballyporeen's Conor Sweeney impressed when coming on as a sub against Cork in the McGrath Cup defeat.

Tipperary’s McGrath Cup senior football campaign for 2017 came to a disappointing conclusion at Templetuohy on Wednesday evening when they suffered a sixteen points defeat at the hands of Cork, 2-22 to 1-9.

This was Tipperary’s second loss in their three team group, having also suffered a drubbing at the hands of Kerry four days earlier.

Fielding a depleted side against Cork, with only four of the team that started last year’s All-Ireland semi-final against Mayo included, Tipperary were no match for the lively visitors, and by half-time, at which stage the winners led 1-12 to 1-4, having played  into the breeze, the writing was on the wall for the home side.

With Tipperary somewhat behind others in their preparations for the year, and with so many key men absent, it was always going to be a difficult assignment  to emerge from such a ”hot” group, but the dismay  facing into a new year with expectations so high after last year’s great championship run, is that Tipperary were not really competitive in either of their McGrath Cup outings.

These defeats should dampen expectations among  Tipperary followers and bring about  a sense of reality as to the county’s standing in football’s pecking order. Concentration now turns to the opening game of the National Football League against Antrim in Clonmel in a few weeks time when promotion from division three will be a priority

Against Cork in typical January conditions at Templetuohy, Tipperary were competitive for only about fifteen minutes. They had the first point from Liam Boland, and two more from Liam McGrath to trail 0-3 to 0-4 after fourteen minutes but then Cork took control. They dominated from half-back and midfield, and with their lively attack moving  the ball quickly and always offering support for the man in possession, the scores followed freely.

Seven scores without reply in eleven minutes  had their win” in the bag”. The most significant of these was  a goal by Niall Coakely in the 21st minute, which helped the Leesiders to a lead of 1-10 to 0-3, and left Tipperary with an impossible task.

To their credit, Tipp did not buckle. Diarmuid Foley’s point was followed by two further Cork points but Tipperary got a boost when Alan Moloney netted in injury time to leave the home side 1-4 to 1-12 adrift at the break, but with the breeze to face in the second half.

It was going to take a major upheaval to turn things about  but early points from Liam Casey and Liam Boland cut the lead to six points and hinted at a possible resurgence. They stayed in the hunt with further points from Liam McGrath and Boland matching Cork scores up to the 55th minute with the scoreboard reading 1-9 to 1-15.

From this to the end though, it was all one-way traffic with Cork picking off their points comfortably, Coakley’s second goal in the 60th minute rounding off an impressive display by the Dublin-based, St Jude’s player.

Only Brian Fox, Bill Maher, Robbie Kiely, and Josh Keane of the first fifteen against Mayo lined out in this game but Conor Sweeney came on ten minutes into the second half, and  midfielder Alan Moloney, came on as a sub against Mayo. With so many key men absent, a repeat of last year’s championship defeat of Cork was always unlikely, but  Tipp fans in the  handful of spectators had hoped for  a keener contest with fringe players seeking to make an impression.

Even allowing for the  absentees, Manager Liam Kearns will have to search hard to find real positives from this outing. Of course the games against top of the range opposition will concentrate the minds of the players on the challenges facing them. Securing promotion to the second division of the league has to be a priority if competition against the stronger counties is to continue and Tipperary’s campaign in  division three this Spring will give a clearer indication of how ready the county is to take the leap forward.

It was a not a night when individual reputations were enhanced.However, such as Liam McGrath and Liam Boland, strengthened their claims for regular starting places with Bill Maher, Robbie Kiely(until black-carded in the 49th minute), and Conor Sweeney when he came on, also doing well.

Cork and Kerry will battle it out for the spot in the final. New Cork manager, Peader Healy, will be pleased with the win but no doubt would have wanted a stiffer test. He had some newcomers on show with Niall Coakly, Sean Powter, and Kevin Davis, underlining their credentials. The O Driscolls,  Don and Brian also impressed.