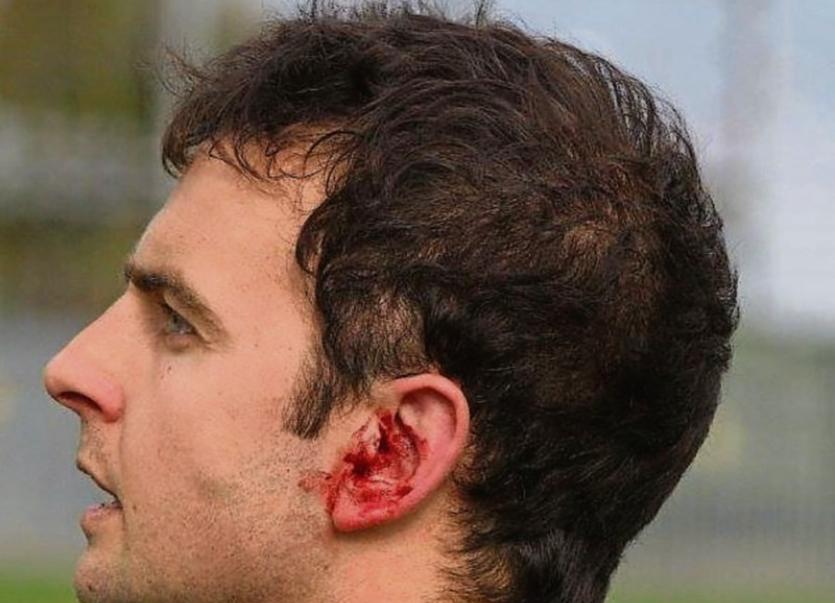 Clonmel's Conor Cooney shows the signs of battle in the win over Skibbereen.

The blustery, greasy conditions had an immediate impact with both sides dropping the ball in the early testy conditions.

While Clonmel played a number of competitive friendlies over the break, there was no hiding the rustiness in the early exchanges.

A kick in behind from the Skibbereen fly-half left put the Clonmel defence under pressure and subsequent phases saw their right winger finish off a nice move in the corner.

This was not the start that Denis Leamy’s men had expected or wanted.

Leadership was needed on the pitch and it came. Clonmel were patient and built phase after phase to drag themselves up the pitch.

After intense pressure, they forced a penalty and adhering to the old adage of getting points on the board, captain Tony Cantwell pointed to the posts. Conor Cooney duly converted to let the scoreboard read 5-3 to the visitors.

Clonmel had momentum now and their forwards dominated and forced errors from Skibbereen.

Clonmel were awarded a penalty in the Skibb’ 22. They opted for a scrum. Captain Cantwell picked from the base of the scrum and made the hard yards before quick hands from the backs saw Luke Hogan score. Cooney converted.

Clonmel kept up the pressure. A great chip and gather by Cooney gained good field position. A kick in behind the Skibb’ defence saw flying winger Greg Carroll dive on the ball to put Clonmel 15 - 5 up at the interval.

While it may have not been said, Clonmel must have had one eye on a bonus point.

The second half started much like the first one. Scrappy and dogged. After a lot of tussles in the middle of the park, Clonmel began to exert dominance again.

Sustained pressure saw them edge towards the posts. The breakthrough was made when young prop Niall Campion picked the ball and scored from close in.

The bonus point was now in sniffing distance and Clonmel didn’t have to wait long to get it. A knock on by the Skibbereen full back gave Clonmel the scrum. Smooth hands by the outside backs saw Greg Carroll race to the corner to score his second try. Conor Cooney converted beautifully from the extreme edge of the right hand touchline.

Clonmel had used their full bench at this stage and to be fair, theyoung players who came on did not let the standards drop an iota.

Fly-half Dylan Cadogan was fed quick ball and  kicked a beautifully weighted ball in behind. Skilful quick thinking and quick witted play by the veteran Cooney saw him skirt the touchline and lay the ball off to Luke Hogan who sprinted down the line to score his second try.

This was a well-deserved and well needed bonus point win. It was a true team performance with all starting fifteen and substitutes playing their part in keeping Clonmel at the top of the league.

This win was complemented by fine wins for the club’s second team against Kilfeacle and the under 18s against Crosshaven. Next up for the first fifteen is an away trip next weekend to Cobh Pirates.