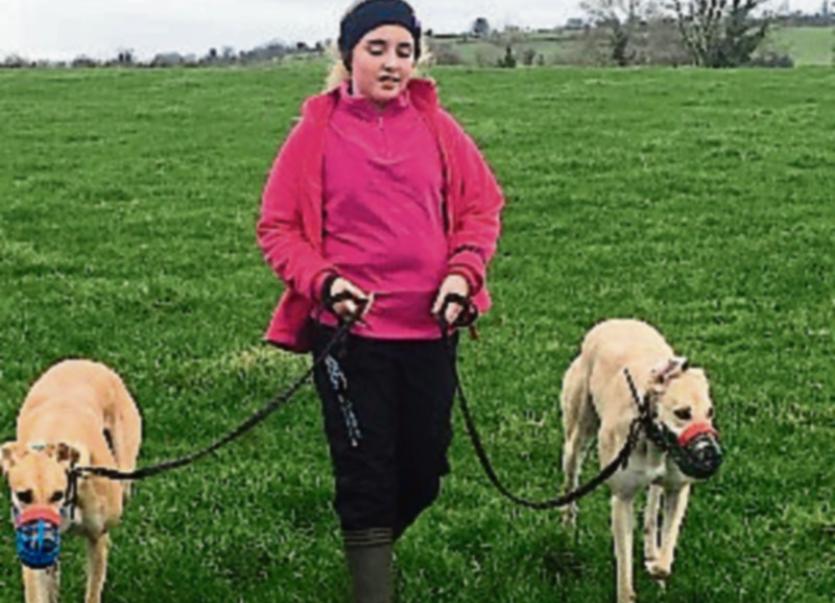 Aliyah McKenna with two hopefuls for the Horse and Jockey Hotel Oaks, Dicks Bimbo (left) and Trillainminella, both owned in Clonmel by the Tobin-Lonergan-Culhane Syndicate.

Local owners and trainers have a strong hand in the 92nd annual National Coursing Meeting, which starts at Powerstown Park in Clonmel this Saturday, January 28th and continues until Monday, when the finals will be held.

No fewer than seven locally-owned bitches will feature in the Horse and Jockey Hotel Oaks and hopes are high that one of these can land the top prize.

They include the fancied Dicks Bimbo, which qualified in Listowel. This is owned by the Tobin-Culhane-Lonergan Sydicate which includes the Tobin brothers from Clonmel - Paddy, John and Liam, as well as John's son Pat.

Another bitch that's considered to have a good chance is TrillainMinella, which is owned by the same syndicate which includes Damien Lonergan from Clonmel and Shane Culhane from Glin in Co. Limerick.

Classic Lady, owned by Trevor Power, will have plenty of supporters in Carrick-on-Suir and Portlaw in Co. Waterford, having qualified at the Clonmel and Kilsheelan meeting.

Well-known greyhound owner Tom Drohan from Clonmel is represented by Wilderness Queen, which qualified in Thurles, while Try Colour, owned by Deirdre Myles in Cashel, qualified in Cavan.

Meanwhile, in the Boylesports Derby, the Ballyglasheen Syndicate will be represented by Jamess Treasure, which qualified in Galbally. This Clonmel-Kilsheelan syndicate includes Bobby and Kieran Kennedy, Kevin Morrissey, John O'Connell and Noel Stapleton.

Its Your Round, which qualified in Thurles, is owned by the Clonmel-based Browne-Houlihan-Smith Syndicate.

Ballygerald Buzz is owned by Pamela Holt and Noelle O'Brien in New Inn, the West Tipp village that also has an interest in Newinn Oak, which qualified in Glanworth and is owned by Shari-Anne O'Donnell.

Trainers Margaret and David Flanagan in Fethard have a keen interest with Barna Wonder in the Oaks and Barna Rock, a reserve in the Derby, as well as training Astana Rubie in the Champion Bitch Stake.

Following the move from its traditional midweek slot a few years ago, the coursing meeting was held last year from Friday-Sunday on a trial basis.

However DJ Histon, chief executive and secretary of the Irish Coursing Club has confirmed that the format whereby the meeting starts on Saturday and finishes on Monday is here to stay.

He said that ticket sales and bookings in hotels, bed and breakfasts and guesthouses were very strong, with a large influx of visitors from all over Ireland and overseas preparing to descend on the town for the weekend.

Random drug testing has now become a feature of coursing and DJ Histon said this ensured that there was a level playing field for everybody.

"That has to be good for the sport", he says.

He was also delighted that the long-range weather forecast was favourable for coursing, and he said that was a great bonus.

Eugene Cooney, marketing manager with the Irish Coursing Club, confirmed that the interest in this year's meeting is "massive".

"Accommodation is at a premium. Enda O'Keeffe (a staff member in the Irish Coursing Club) helps people find somewhere to stay but is finding it so difficult this year that she's going back to people who haven't had coursing visitors for years".

The coursing finals take place on Monday and three days later on Thursday, February 2nd the spotlight at Powerstown Park switches to horse racing for the first meeting of the year.

The feature race is the Surehaul Mercedes-Benz Grade Three Novice Hurdle of €37,500.