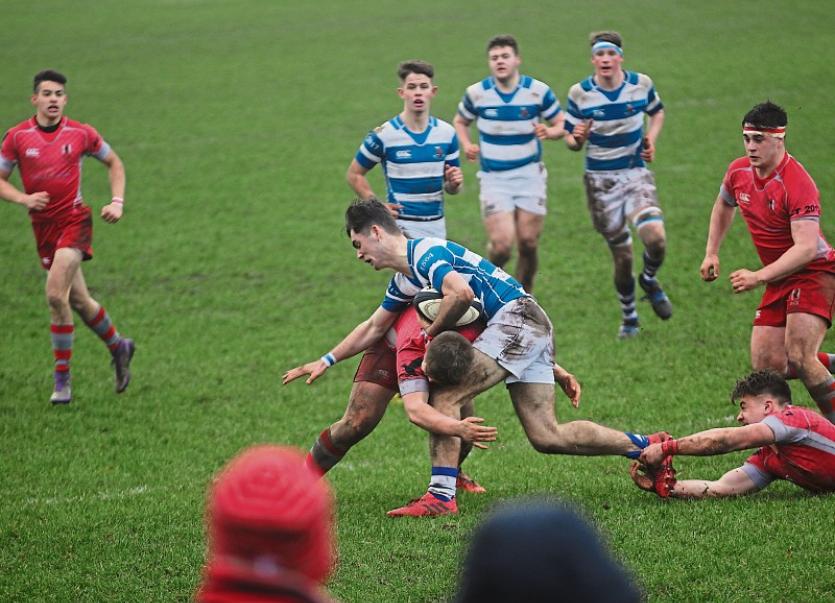 Rockwell's Ryan O'Sullivan being tackled with Jake Flannery in attendance

Containing thirteen  of last year’s side, Glenstal cruised into the Munster Schools senioir semi-final against a less experienced and much younger Rockwell College at Clanwilliam, winning 18-0.

On a very wet and windy day, Rockwell’s lineout did not function and this starved the team of a lot of first phase possession.

Losing influential captain Kevin Kelly very early in the game did not help the cause and their No. 8, Ciaran Ryan, who was was taken off injured. This deprived the pack of solidity in a crucial area.

Rockwell made too many errors and the more powerful Glenstal pack provided the foundation for them to play an expansive game, resulting in two tries, one an intercept just before the final minute for Andrew Hogan to go over under the posts for an opportunist try. The penalty count was eight-one at half time, showing the pressure being exerted by Glenstal at the breakdown against Rockwell as they found themselves in offside positions too often.

Glenstal went 6-0 up early in the first half through two penalties and then winger, Ben Healy, went over just on the stroke of half time to leave Glenstal 11 points in front.

Try as Rockwell might they were unable to break down a solid Glenstal defence. The Rockwell side were full of endeavour and Paddy Murchan, Kevin Kelly, Paudie Leamy in particular tried hard to stem the flow.