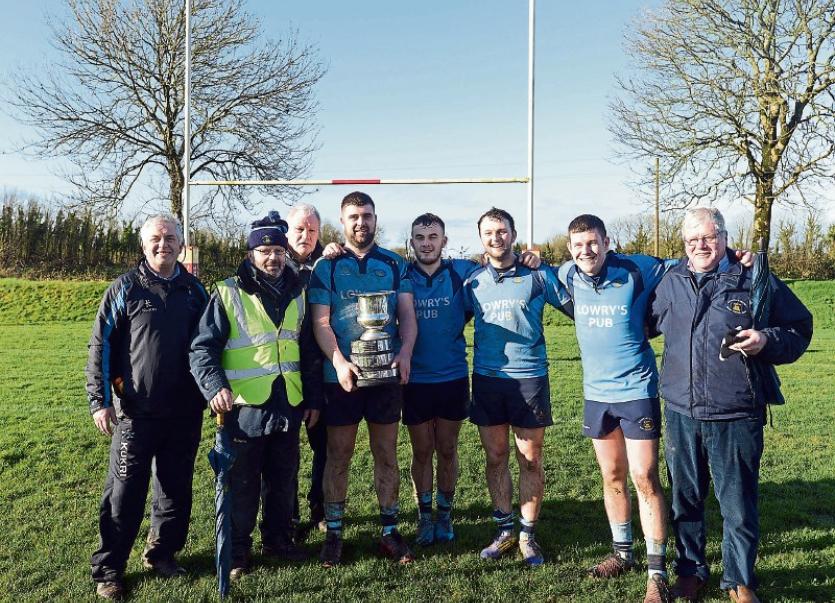 Kilfeacle claimed their fourth Munster Junior Clubs Challenge Cup with a 12-10 win over Bandon at Charleville.

Kilfeacle had a game plan and that was to start at high tempo, to score early and subdue the opposing support. Things sometimes go to plan! The game was played with great spirit and commitment with a lot of free flowing moves and running of the ball and Kilfeacle started well and were matching their opponents.

After 15 minutes Kilfeacle and District, through the boot of Jamie Heuston, had fired penalty and dropgoal attempts between and wide of the posts, building up a lead of 6-0.

Bandon were dominating the scrums and were using this platform to win penalties and gain ground. Kilfeacle were holding off their opponents but the penalty count was starting to rise and it seemed only a matter of time before one of these penalties would be converted to points on the board.

On 25 minutes Bandon’s territorial dominance was awarded when after numerous phases of play they pushed over to score in the corner scored by Colin Jackson. Bandon soon realised that kicking in these conditions was treacherous to say the least and their conversion attempt was unsuccessful.

Kilfeacle did not seem too fazed by this score and put together their best period of play which five minutes later saw them only five yards from their opponents try line with a lineout. Kilfeacle lost the ball in contact from the throw in and the reliving kick went bouncing into Kilfeacle’s half.

The chase was on. Kilfeacle’s full back collected the ball and safely found touch. Bandon did not ease off on the pressure and after wave after wave of attacks Kilfeacle’s defence had still stood firm. Kilfeacle’s resilience paid off and with time up at the end of the first half they were duly awarded another penalty which was to fall agonisingly short of its mark. The scoreboard read 6 – 5 to Kilfeacle as the half time whistle sounded.

The second half started with Kilfeacle, buoyed by their late first half performance and a huge travelling support, on the ascendancy. Similar to the first half they were able to convert their territorial advantage to points on the scoreboard with another penalty and another dropgoal from Jamie Heuston.

With the score board now 12-5 Kilfeacle mounted attack after attack but their efforts never paid off. With the game at almost an end of normal time Bandon endeavours finally bore fruit when a huge team effort saw the ball touched down in the corner by Mike Murphy. The scoreboard now read 12- 10 which meant that the long range conversion attempt was crucial to draw level. It was missed.

This was a devastating blow to the Bandon side, one they never managed to recover from. Kilfeacle once again attacked and were on top and could smell blood. Bandon were doing everything to stop Kilfeacle from getting the insurance score and finally they went too far and Kilfeacle were awarded a penalty a long distance out.

Kilfeacle knew that the next score would seal the game for who ever scored it and elected to kick for the points. The attempt fell short but in Bandon’s endeavours to clear their line in the dying moments Kilfeacle were awarded another penalty. To the supporters disbelief the ball was kicked to touch but disbelief turned to relief followed by ecstasy when the final whistle sounded  to leave the final score at 12- 10 in favour of Kilfeacle and a historic victory was in the bag.