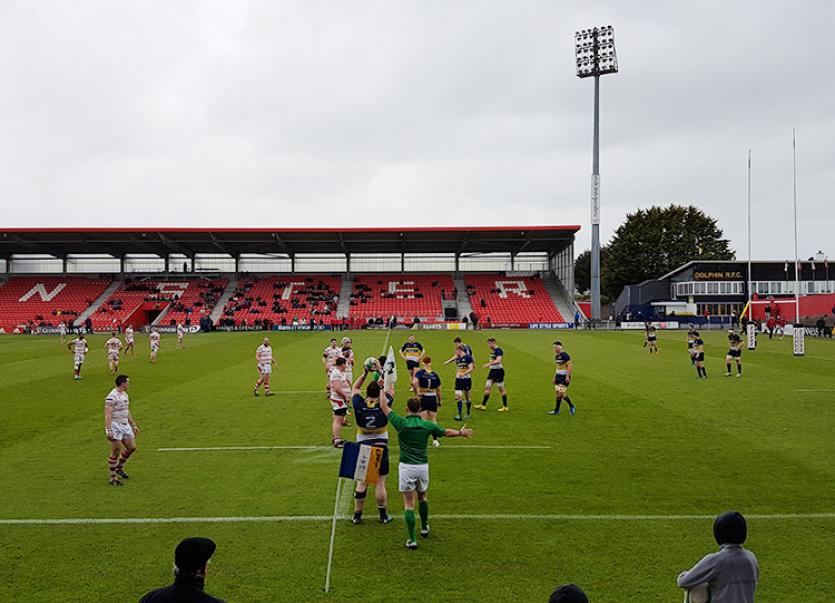 A brave effort from Nenagh Ormond came up agonisingly short in an Ulster Bank League division 1B-2A play-off at Irish Independent Park in Cork on Saturday afternoon - the Tipperary side gave it everything they had on an historic day for the club, but, in the end, the famed Dolphin RFC clung on to their league status.

Nenagh Ormond made travel arrangements to Cork on Saturday to see if Cinderella could fit into her slipper - the Nenagh lads appreciated that they were distinct underdogs against home side Dolphin, but irrespective of the odds the Tipperary side played superbly and asked their opponents some tough questions. Indeed, Nenagh dominated at scrum time in a game which did not leave much room for aesthetics.

And, it will be interesting to see how the Nenagh Ormond club responds to the experience. Nenagh Ormond have now shown that they can mix it with the top clubs in the country; the club has had a taste of the big time and the only question now is whether Nenagh Ormond are prepared to drive forward from here. In terms of historical significance Saturday’s play-off final represented the biggest game in Nenagh Ormond’s club history and knowing some of the personalities involved you would have to suspect that bigger days are on the way.

Nenagh Ormond made a highly-encouraging start to this contest and were left cursing their misfortune as early as the third minute when a Clayton Stewart penalty drifted wide of the posts. Then, to confound matters, Dolphin notched a converted try from their first attack of note in the ninth minute. The home side earned a penalty for holding on in the middle of the field, kicked to touch, mauled their way deep inside the Nenagh ’22 and scrum-half Daryl Foley scooted in for the only try of the game.

The first scrum of the contest did not materialise until the 16th minute - Nenagh pushed the home side off their own put-in and we sensed that this play-off final had reached a critical juncture. Ormond proceeded to earn a subsequent penalty from a scrum and although Clayton Stewart’s effort flew wide Nenagh must have been hugely encouraged by their performance in the tight. Game on.

Sure enough Nenagh enjoyed another opportunity to put the squeeze on Dolphin in the 23rd minute, the home side conceded another penalty and Stewart converted (3-7).

Nenagh’s scramble defence recovered just in time to deny Dolphin a try in the 32nd minute and with four between them at the break there was still every chance of an upset.

Now playing into a stiff breeze Nenagh Ormond needed to grit their teeth and the Tipperary side did so impressively during the opening two minutes of the second half. Indeed, Dolphin were pressing hard for a second try when Nenagh won a turnover and Clayton Stewart hacked clear three times, fought his way into the Cork side’s 22 and, somehow, Ormond earned a penalty for holding on. The Kiwi out-half converted his kick and Nenagh trailed by a tantalising one (6-7).

Nenagh breathed a sigh of relief in the 53rd minute when Dolphin knocked on deep inside the Ormond 22 with a two-man overlap outside.

Dolphin looked a little nervous and opted to try for a drop goal as early as the 60th minute in an attempt to keep a determined Nenagh side at arm’s length.

A Barry Keeshan penalty forced Dolphin into a four-point lead before the Cork lads extended their advantage to seven in the 68th minute (6-13). Once more Nenagh Ormond were misfortunate - the Tipperary side were defending brilliantly and earned a turnover, but just as Nenagh tried to counter some miscommunication in midfield coughed up a penalty for crossing and Barry Keeshan was thrilled to kick Dolphin into a seven-point lead.

Nenagh Ormond fought desperately hard for the remainder of this encounter, but failed to conjure an opportunity to rescue the situation.