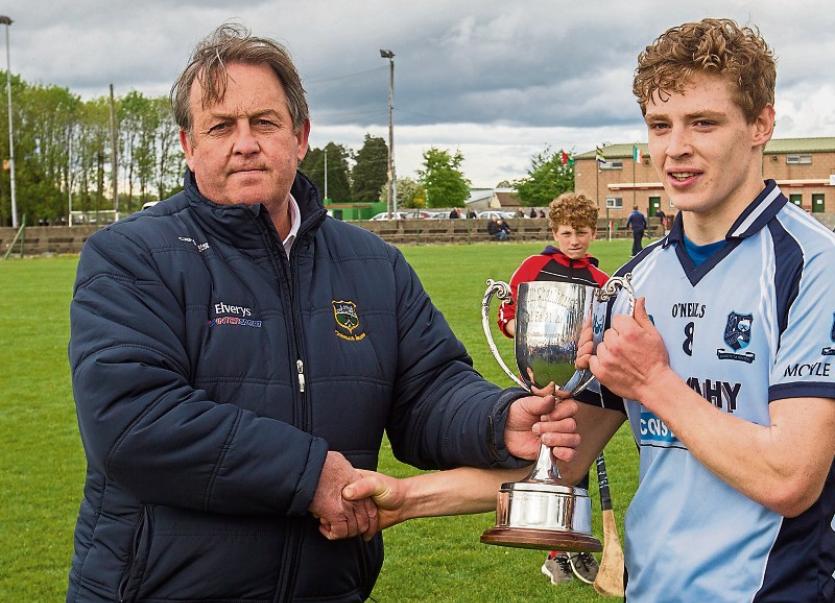 Clonmel’s grip on the Shelly Cup and county under 21 A football championship continued as Moyle Rovers took over from Commercials, champions for the past three years, to see off the challenge of West Tipp traditionalists, Galtee Rovers in a rousing encounter at Cashel on Saturday, winning 3-12 to 1-12.

Moyle did it the hard way. They gifted two goals to Galtees in the opening eighteen minutes and were behind by five points at half-time.

But in the second half they were  far superior, four unanswered points in the last eight minutes clinching a victory for them that was richly deserved if somewhat erratically executed.

It was also achieved despite the loss of the talented Stephen Quirke to a hamstring injury for the second half, further testimony of the character of the side to overcome that adversity also.

Favourites going into the final, the Powerstown-Lisronagh outfit was rocked by a Darren McGrath goal for Galtees after only two minutes, his speculative shot slipping from the grasp of Moyle Rovers goalie Tommy Morrissey over the line.

A setback for Moyle Rovers, but they recovered splendidly and in the 10th minute Morgan Irwin finished a powerful run out of defence with a cracking goal for a lead of 1-2 to 1-1. 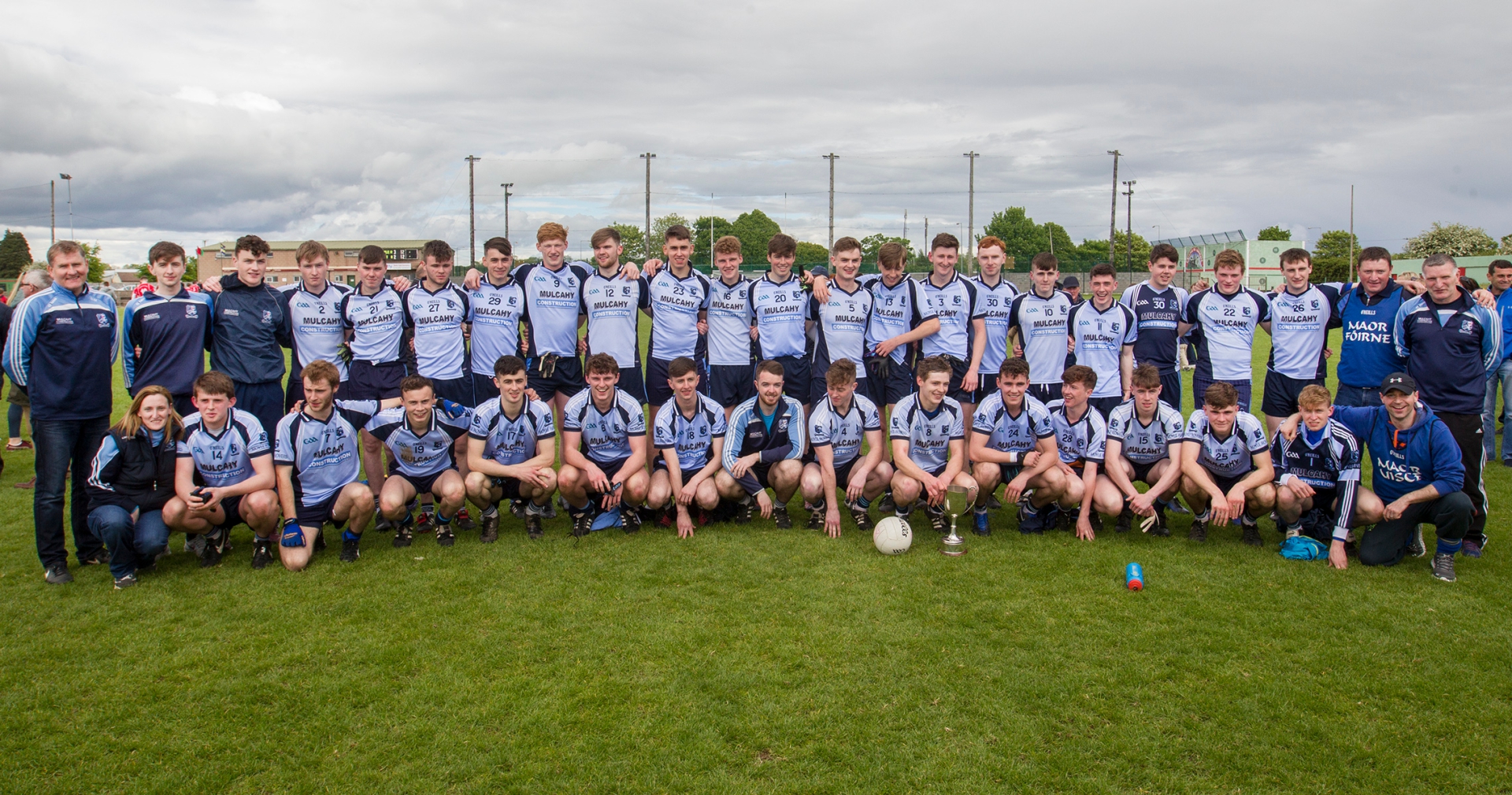 The Moyle Rovers team that won the Tipperary u-21 'A' football title.

Galtee Rovers were showing great appetite for the contest and after points by Adam McGrath, Steven O'Dwyer and Shane Ryan, they rocked  their opponents with an Adam McGrath goal in the 18th minute off a weak kick-out, to go 2-4 to 1-2 clear.

With the fresh breeze to help them, Galtees were the more positive side but Moyle Rovers’ scores  came easier to them, the sides sharing eight points in the period up to half-time at which stage Galtees led 2-8 to 1-6.

The complexion of the game changed entirely in the second half.

Rian Quigley  pointed for Moyle Rovers inside a minute and then, four minutes later, his lob-shot  from the left looped over Galtees goalman, Calum Fanning  into the net. Two minutes later Quigley was again the man of the moment, when, after good work by Ciaran Luttrell, he notched his second goal to put his side 3-7 to 2-8 ahead.

Now it was Galtees turn to show their mettle and this they did with two Steven O'Dwyer points  to level by the 43rd minute.

Shane Ryan rattled the  Moyle Rovers’ woodwork  with a pile-driver for Galtees, and a Steven O'Dwyer effort was taken off the line as the West lads piled forward. 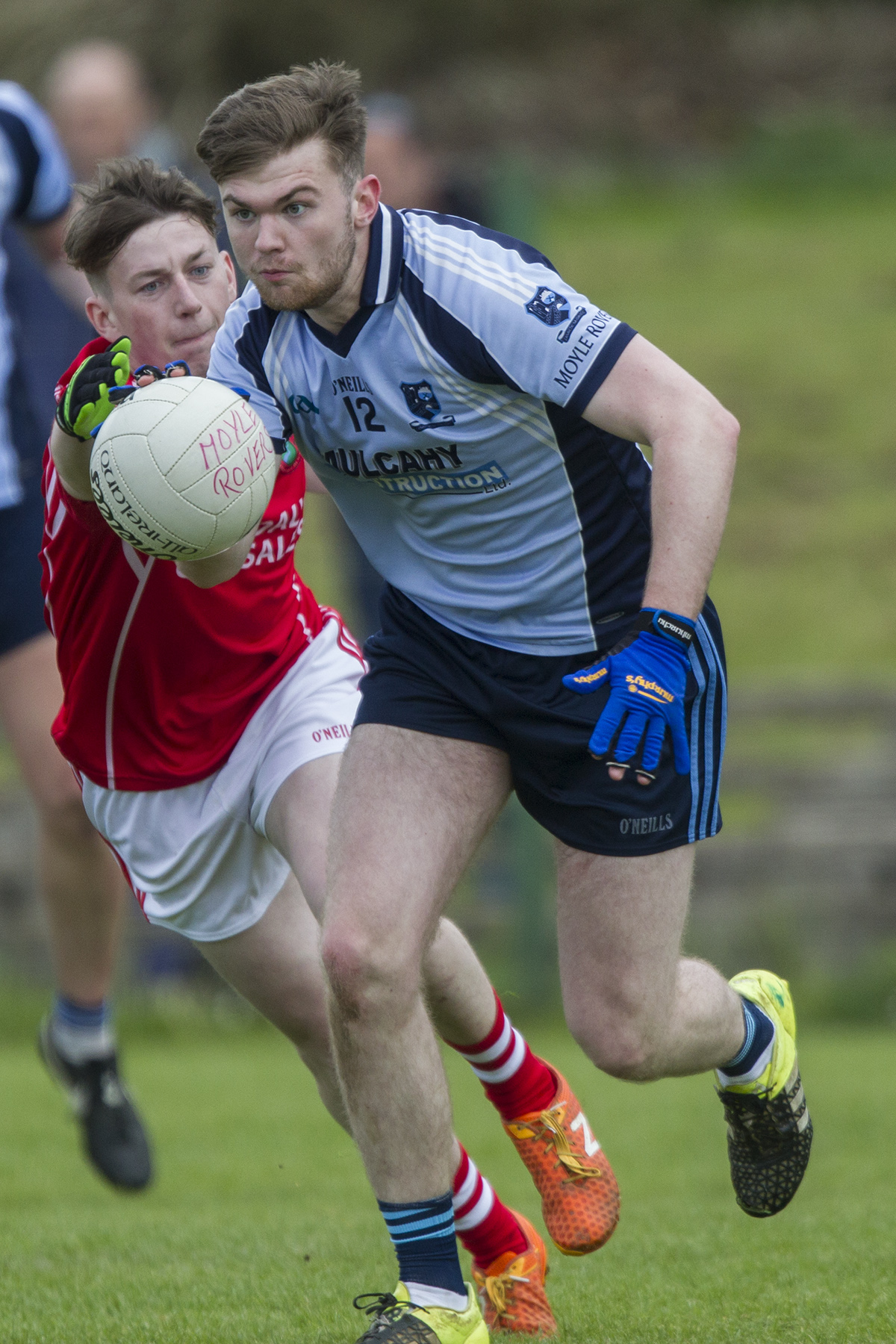 David Roberts (Moyle Rovers) gets to the ball ahead of Steven O'Dwyer (Galtee Rovers) in the County u-21 FC 'A' final.

Had either of those gone in, its anybody’s guess how things might have turned out.

David Roberts restored the advantage to Moyle Rovers but it was short-lived as Steven O'Dwyer and  Shane Power landed points to put Galtees ahead again by one point with ten minutes to play.

But that was as good as it got for Galtee Rovers as Moyle Rovers now found another gear.

Dara Ryan levelled for them in the 52nd minute; Ciaran Luttrell nudged them ahead shortly afterwards, and in the concluding minutes Rian Quigley from a free and Ian McGrath set the seal on their win with further points.

Moyle Rovers’ only concern  in their victory was that they made things difficult enough for themselves through errors which gave Galtee Rovers the initiative.

On the positive side, this is a very talented Moyle Rovers outfit who should form the nucleus of senior sides in years to come as they seek to upstage arch rivals Clonmel Commercials.

Corner forward Rian Quigley shaded individual honours with his two goals from play and 2-4 in all but Morgan Irwin, Danny Owens, Ciaran Luttrell, Dara Ryan, and Shane Lonergan also had big games for the winners.

Galtee Rovers gave a fine account of themselves and more will be heard of their very young side who have the considerable consolation of a West title to show for their efforts for the year.

The challenge for them is to build on what they have achieved this year and they certainly have the talent to do so.

Shane Power, David Byron, Steven O'Dwyer, Adam McGrath, and Sean Daly were to the fore in this encounter.