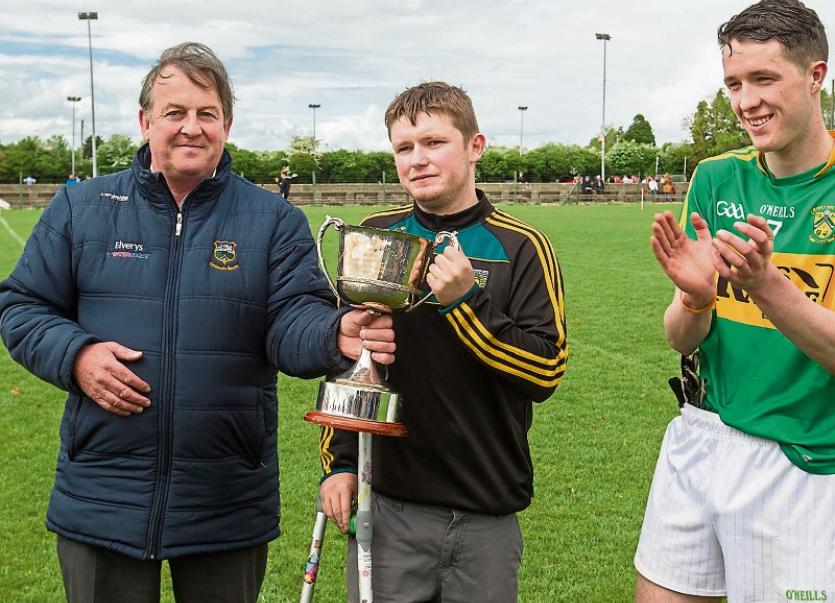 Cahir’s bid for a third Tipperary Water county under 21 football B title came unstuck at Cashel on Saturday where they had to give best to a superior Clonoulty-Rossmore outfit, though the seven points winning margin did flatter the new champions, 1-11 to 0-7.

Winners in ‘16 and ‘14, Cahir went into this final full of confidence, but they found the West champions a hot handful, and the South challenge wasn’t helped either by some slack shooting on their part, registering eight wides in the first half when aided by the breeze.

Cahir were confident on the ball,  and moved it about well, but near goal they lacked the incisiveness that would produce a green flag,

In contrast, Clonoulty-Rossmore were more direct in their approach and in full forward Cathal Bourke had a player who caused Cahir problems all day and who finished with an impressive 1-2 from play, and 1-4 in all.

Overall, it was a fine contest, played in a very sporting spirit, with the West lads deserving winners.

There was a touching moment at the end when joint captain Gary Donnelly, who suffered a leg injury in the second semi-final, accepted the cup from Football Board chairman Joe Hannigan.

A lively opening suggested Cahir would justify their favouritism tag. 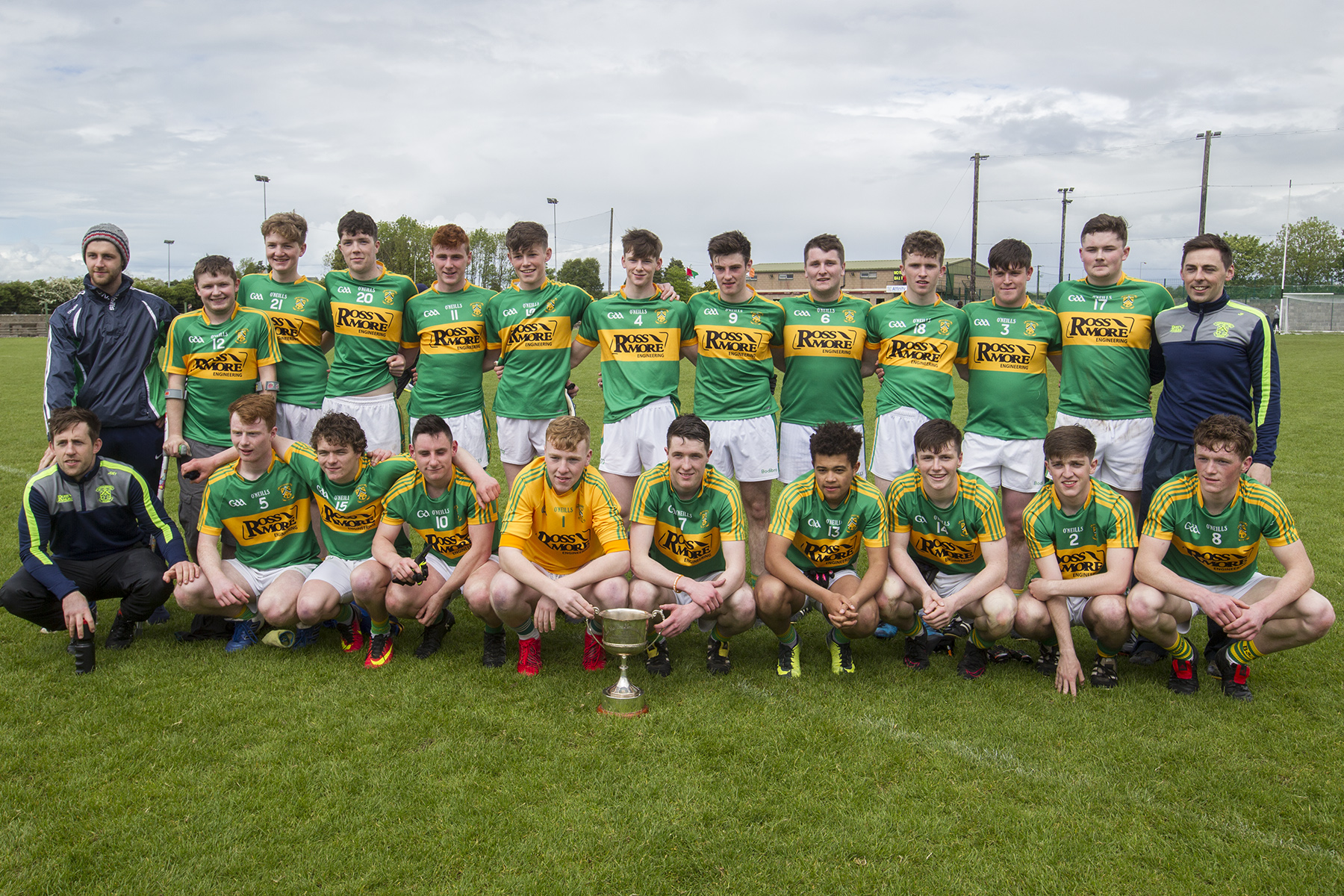 The Clonoulty-Rossmore team that won the County u-21 FC 'B' title.

Ryan Murphy popped over a point for them in the first minute and though Cathal Bourke levelled for Clonoulty a few minutes later, Alan O'Connor from a free restored Cahir’s advantage.

Dillon Quirke raided through the middle but his powerful shot skied over the bar in the 18th minute to bring Clonoulty level.

From here on however, Cahir started to slip behind.

Enda Heffernan, Cathal Bourke and Dillon Quirke were dominant figures for Clonoulty as the minor champions of 2015 hit three unanswered points from the big three  to go 0-6 to 0-2 ahead approaching half-time.

Alan O'Connor, from a forty five added to Cahir’s tally, but,  trailing by 0-3 to 0-6 at the interval, having played with the breeze, things did not look good for them.

Cahir needed to step up their game if they were to succeed but Clonoulty were not going to release their grip.

In the 42nd minute, Jack Murphy saws his rasping shot come off the woodwork. 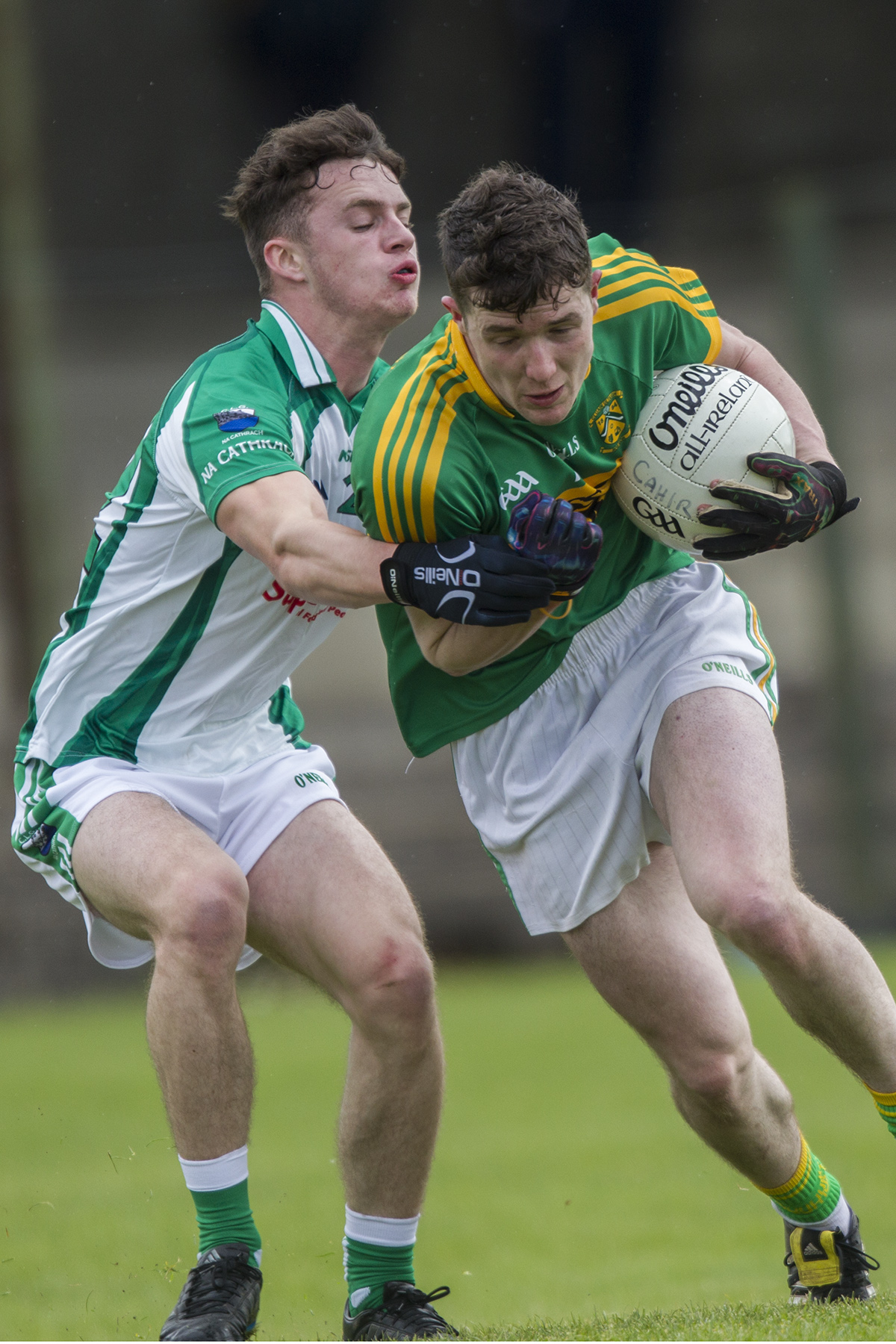 Clonoulty-Rossmore's Gerard Mockler gets past the challenge of  Cahir's Brian McKenna.

A goal there might have given Cahir the boost to drive on for a win. Three minutes later Cahir goalie Rares Stoica came to their rescue with a smart save off Enda Heffernan.

The decisive score came in the 52nd minute when Cathal Bourke finished off a slick move between Dillon Quirke and Aidan Loughman with a Clonoulty goal for a lead of 1-9 to 0-5.

There was no way back for Cahir after this. Bravely though they battled to the finish, Clonoulty were in control.

The honours rest where they belong. Clonoulty’s big three, Heffernan, Bourke, and Quirke were their leading lights but Gerard Mockler, Michael Ryan and Paudie Carew also contributed handsomely to the win.

Special mention of team captain Gary Donnelly who broken his leg in the semi-final and was on crutches for the final.

He had made his contribution to in the earlier rounds of the campaign.

Cahir  can have no complaints. Had their first half finishing been better it would have boosted their confidence and while disappointed with the performance and the result, they can look back on a fine campaign rewarded with the South title..

They played a possession game and were always comfortable on the ball but they lacked a cutting edge in attack where their rivals more direct approach  reaped its reward.

Stephen Grogan, Patrick Meehan, Ryan Murphy, Mikey O Connor, Ryan O'Donnell, and Alan O'Connor were key men for them but it was not their day.

Tipperary hurling manager Michael Ryan has questioned whether his team are being given enough time to prepare for matches.