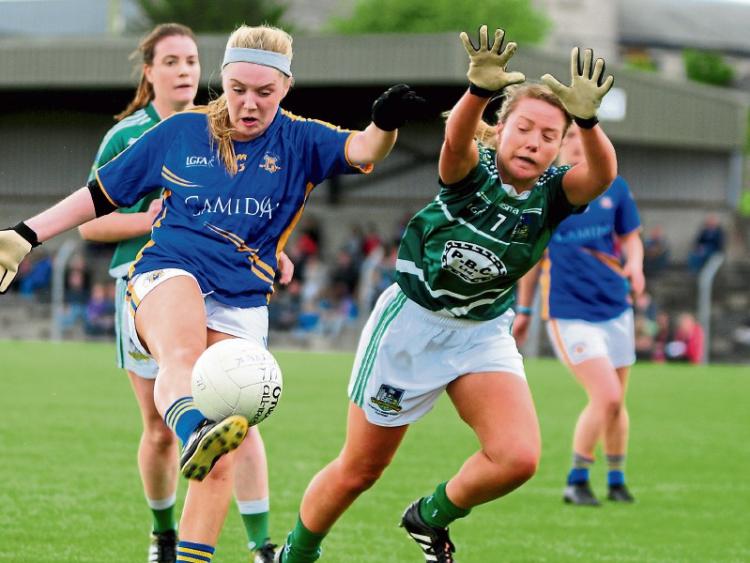 The Tipperary Ladies Intermediate Football team opened their championship in fine style in Sean Treacy Park, Tipperary Town on Saturday with a huge win over Limerick.

Tipperary had the opening point from Aoibhe O’Shea, followed by goals from Evrena Everard and then Sarah Everard.

With less than five minutes played, this early blitz had established a ten-point lead, 2-4 to no score.

Tipp were playing exceptionally well, with good support play from centre field and the half back line. There was very good movement and selfless passing within the forwards that created the scoring chances.

Limerick responded with two points but another goal from Roisin Howard effectively ended the game as a contest and the result never looked in doubt from here to the end.

Further goals followed from Laura Dillon and Roisin Howard as Tipperary scored freely to lead at half time by 5-10 to 0-2.

With the slight breeze to aid them on the turnover, Tipperary picked up where they left off in the first half.

Shortly after the restart Mairead Morrissey scored a goal, which was soon followed by a Catriona Walsh goal.

Tipperary introduced five substitutes while adding to their tally. The last score of the game fell to Roisin Howard, who rounded off a very good performance with a goal to complete her hat-trick.

Tipp had a number of players making their championship debuts on Saturday and they can be all pleased with their performances.

This was always going to a difficult assignment for Limerick. Forced to make three changes before the start, they met a well-oiled machine in this Tipperary team which is playing very well on all fronts.

Fresh from their League success, they completely outplayed Limerick and brought their unbeaten run in competition to eleven games.

Despite the big score difference the game was played in a very sporting manner all through.

From here Tipperary will hope to retain their Munster crown when they play Clare in the Munster Final, scheduled for Saturday July 8th, and all involved are wished the best of luck.