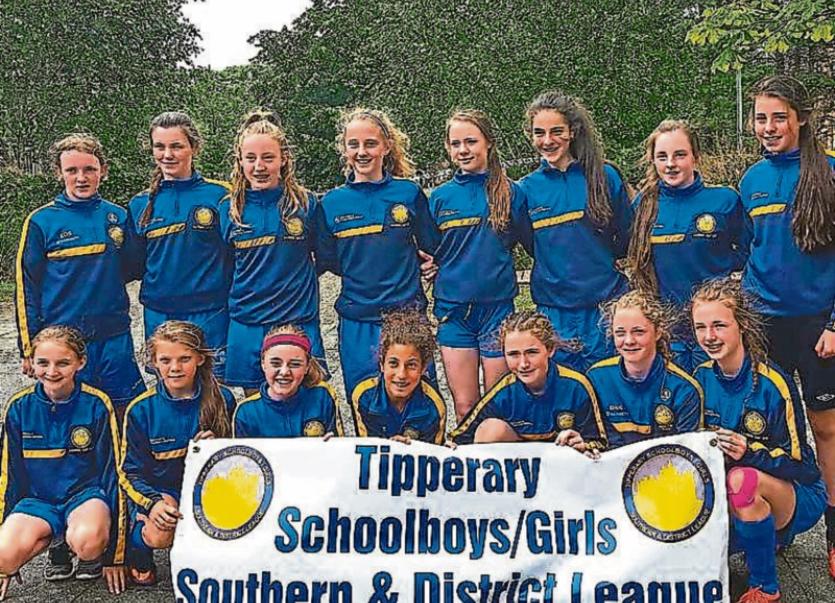 The South Tipperary Under 14 Squad

The future is looking bright for TSSDL girls soccer as the dust settles after the busy four day Gaynor Cup tournament at University of Limerick last weekend.

The TSSDL girls fielded three teams for the first time ever this year.

All of them continued their fine run at the Fota Island Resort Gaynor Tournament with the under 12s in their first ever qualificationfinishing 4th in Ireland, the under 14s rising from 6th place last year to a 5th place finish this year and under 16s finishing 8th, their highest ever finish to date.

These are hugely positive gains for their very busy manager Stephen Quinn and his team of coaches Brenton Dewick, Hayley Dewick and Aoife Lynch.

There is a big future in these groups of girls and they were all a credit to their league, clubs, and families.

Credit  also to David Leenane of the FAI over the weekend for all his support and a big thanks to J&S Pro Performance who helped the teams out this year with Recording games / Warm ups and GPS Tracking of players which helped hugely in preparation and analysis of the teams.

The u16s finish 8th overall which is a great achievement. Great performance on the final day, creating loads of chances but just not clinical enough in front of goals.

The u14s rounded off their tournament with a great win against  neighbours Kilkenny.  They dusted off the disappointment of Friday with two great wins on Saturday and Sunday.  Two goals from Alessia Mazzola (Cashel) and one from Emer McCarthy (Cashel) in capped a totally dominant performance. They finished 5th overall, one place higher then last year.

The u12s finished 4th overall after two penalty shootout loses against Dublin and Sligo-Leitrim on Saturday.

Great achievement for a very young talented group of players to finish 4th overall and to be on the unlucky side of two dreaded penalty shootouts.

Eabha Hogan (Killenaule) turned on the acceleration to score a great goal and Aoibheann Clancy (Kilburn and Ireland International ) dominant and dogged in midfield as always creating play down both wings also scored a great goal.

The u16s played Donegal on Sunday  but lost 1-0 to finish in 8th place which is a massive achievement after finishing 2nd in our group and it will be the u16's highest placed finish to date.