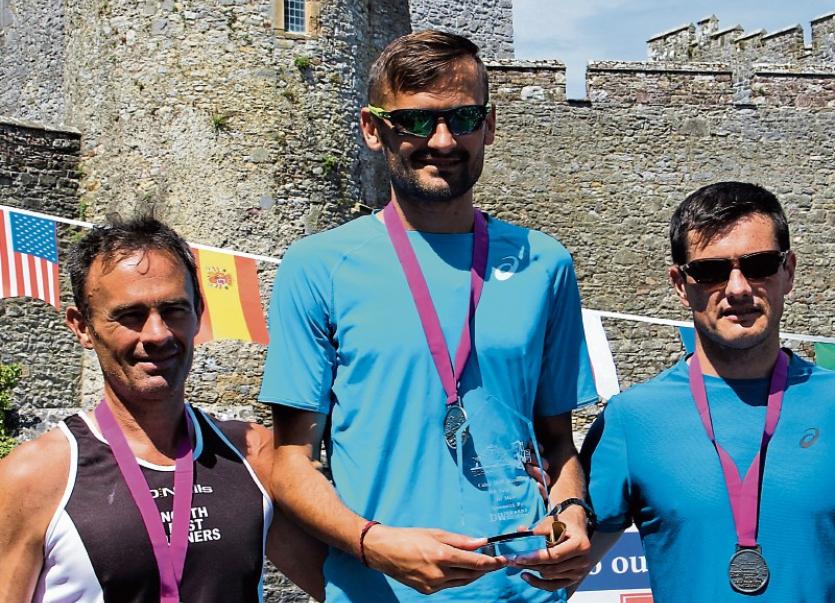 The first three men home in the Cahir Half Marathon, organised by Mooreabbey Milers AC, were, from left, Ray Coogan, runner-up; the winner Sergiu Ciobanu and third placed Kieran Lees.

Sergiu Ciobanu was a popular winner of the Cahir Half Marathon, organised by Mooreabbey Milers Athletics Club.

It was a day to be cherished for the club, as months of hard work and preparation culminated in three amazing hours of road running.

The sun blazed down on Cahir, which was awash with club colours from all over the country. There was a real buzz around as runners gathered for what was to be an enjoyable 13.1 mile race.

The club was honoured to have John Downes as race starter. John is a fantastic athlete and coach and a member of Moreabbey Milers club.

Some of his own proudest achievements were winning the British cross country championships in 1996 and running a personal best of 13.29 for 5k.

The race got underway at 10am to cheers from onlookers.

The top three finishers did all the running up front for the majority of the race, which passed through the village of Ballylooby.

Word came through from the Morisson BMW lead car that Sergiu Ciobanu of Clonliffe Harriers was opening up a gap at mile twelve. He raced past the castle to rapturous applause and cheers from the supporters and onlookers to win the race in 1 hour 14 mins.

Soon the second male came into sight and it was Ray Coogan from the North East Runners club in Meath, who crossed the line in 1hr 17 mins.

Mooreabbey Milers were delighted to see one of their own clubmen, Kieran Lees, taking third place in a time of 1 hr 19 mins.

There were plenty of talented women competing on the day too. Dundrum AC's Linda Grogan took the spoils, winning the lady's race in 1 hr 29mins. Keeley Tideswell of Clonmel AC ran a fine race to take second in 1.31, followed by Ellen Hanley of Grange Fermoy AC in 1.32.

The two person relay was a popular event, with 22 teams taking part, each member running just over 10k each. The winning team was Kilmallock AC, consisting of Tony McMahon and PJ Carey, who ran a combined time of 1.22.

Other than Kieran Lees in third place, other Mooreabbey club members also did really well in the race.

The event would not have been such a success without the help of groups such as Cahir Meet and Train, Cahir Tidy Towns, Cahir Men's Shed, Galbally Cycling Club, Tipperary Motor Bike Traffic Management, Cahir GAA and the Mooreabbey club members and their families.

A special word of thanks is extended to photographer Jane Griffin.