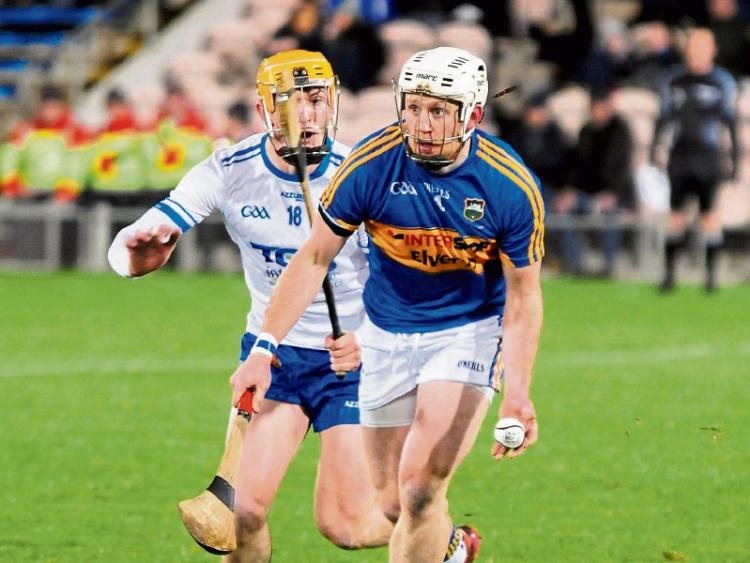 Tipperary's Sean O'Brien was in control of this situation against Waterford's Peter Hogan during last weekend's National Hurling League encounter at Semple Stadium.

Manager Michael Ryan was satisfied with his team's approach in the second half of Saturday's Allianz National Hurling League game against Waterford, when Tipp came from behind to win their first competitive match of the season.

"The workrate was particularly good in the second half, and we needed to check ourselves on that at half time. The guys set very high standards for themselves, I no more than anyone needed to remind them that wasn't the level (in the opening period), and the second half was certainly pleasing.

"But look, as I caution all of the time this is winter hurling still. We're in the first days of spring, it doesn't feel like it.

"Will it count as we get to the latter stages of this league, no it won't. Will it count when we start the Munster championship, no it won't. But look, for the here and now it's a good workout. And what's particularly important for us is that we got to see a couple more players, and they love that opportunity, they absolutely love it.

"For anyone who got a chance to go on the pitch today, whether it went particularly well or it didn't go so well, you got a chance to wear a Tipp jersey, and that's hugely important for these young fellows".

He said that when a quality team like Waterford came to town, "you really have to play well to win.

"We did take advantage of the elements too, it wasn't massive but every little advantage helps.

"We've been watching Waterford for the last number of years and they are very comfortable going short with their puckouts. The challenge is always ours in terms of how you handle it, and I think it worked pretty well for us tonight.

"It can depend on the personnel that are there but I thought Mikey Breen in particular gave his man plenty of room to look for the ball and then immediately got up to it, and that was pleasing. It puts pressure back where no team wants to be under pressure".

He agreed that his side's response to Waterford's goal was pretty emphatic - "it's great to come down the field and create an opportunity like that, we created two, and I thought Jason had a great opportunity as well.

"That's pleasing, we do want to try and carve out those opportunities in every game. Last week we didn't get a shot on goal, and that's the difference a week can make".

Assessing the injuries picked up in the opening eleven minutes, he described Dan McCormack's knee injury, when he was helped off the pitch, as "worrying. That will take probably 24 or 48 hours to get a proper scan on that.

"We thought that Joe O'Dwyer dislocated a finger, and it looks a little bit more sinister than that, he may have a broken thumb".

Moyne-Templetuohy's Paul Maher has played in both league games  but as the campaign progresses Michael Ryan confirmed he would rotate his goalkeepers.

"That was always our intention. We have three goalies on the squad, and Paul has had two games but I think we need to step Paul down now and let one of the other two boys at it. That's the whole point of this league.

"I think Paul can step away from these couple of games with a tick under his name. That should bring a bounce to his training and his belief system.

"You just can't buy time on the pitch like that, it's hugely valuable".

Tipp's next game is against Wexford at Semple Stadium on Saturday week, February 17th, and the manager is looking forward to having this weekend off.

"The week ahead is important, and we will get a good amount of work done. The following week we'll measure it downward.

"It's a great break because if you had another game this week it would put big pressure on lads.

"But the two-week window is valuable for those chaps, to give them some down time, and hopefully we'll get a chance to see a few more players in a few weeks time".