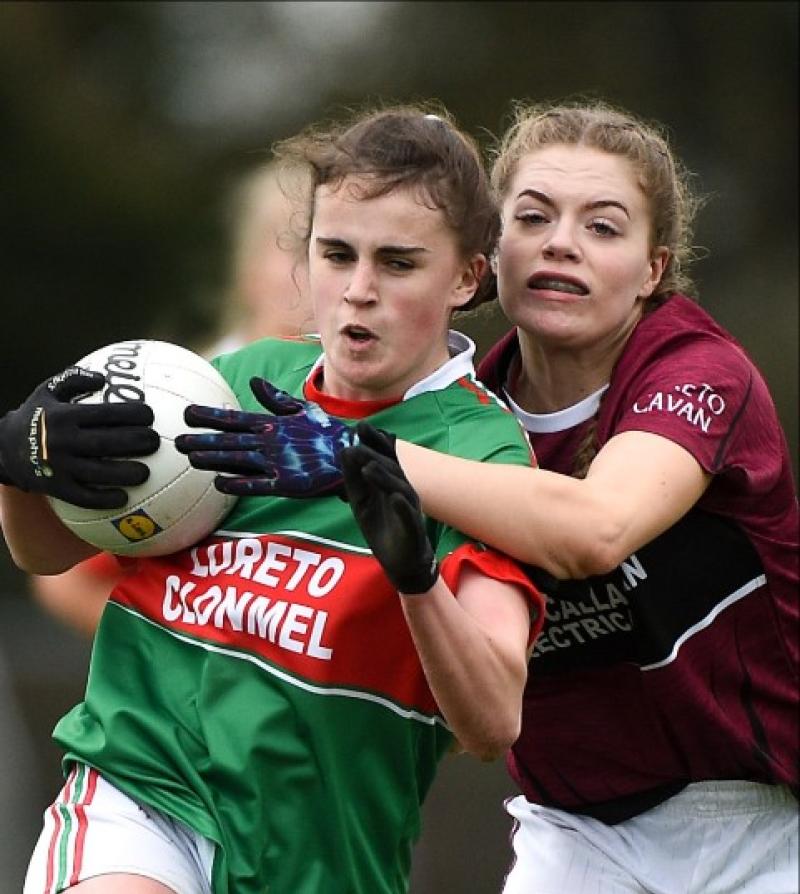 Loreto Clonmel's brave bid for All-Ireland glory ended in defeat in Kinnegad, Co. Westmeath this afternoon, Saturday, when they were beaten by Loreto Cavan in the Lidl All-Ireland Post-Primary Schools Senior A Football Final.
The Clonmel girls were crestfallen at the final whistle after they lost out to a more clinical Cavan team in a closely-contested and entertaining decider.
In their first season playing in the A grade, Loreto Clonmel can be proud of their performances over the past number of months. And despite this defeat, they can take much satisfaction at the conclusion of a campaign that saw them crowned Munster champions.
Each team finished the game with eight scores, but the two goals that Loreto Cavan's Muireann Cusack scored in as many minutes early in the second half proved crucial.
Those goals put them firmly in the driving seat, as they led by 3-4 to 1-3 with 20 minutes remaining.
The Clonmel girls refused to throw in the towel. Kellyann Hogan, who ran herself almost to a standstill at midfield, converted a free at the three-quarter mark.
Niamh McCorry hit back with a Cavan point, but they failed to score again in the last quarter of an hour.
The Clonmel side enjoyed sustained bouts of pressure as the minutes ticked away. Jenny Everard, with a point from play, and another accurate Kellyann Hogan free reduced the deficit, as they kept plugging away in their attempts to reduce the leeway.
There were five minutes remaining when Jenny Everard collected Kellyann Hogan's pass and steered a low shot towards goal, but she was denied by the outstretched leg of Cavan goalie Ciara Boylan. A goal at that stage would have left just two points between the teams and made for a very interesting finale, but it wasn't to be.
Jenny Everard had a late point for the Clonmel girls, as the Cavan team held on for victory.
The Tipperary team had a dream start. They settled much faster than their opponents and Ava Fennessy converted a free after she had been fouled.
Only two minutes had elapsed when they put one of the best moves of the game together. Captain, Cora Maher collected the kickout that followed Ava Fennessy's point and following a rapid exchange of passes between Aine Fitzgerald and Anna Carey, Cora Maher put the finishing touch to the sublime move she had started with a low drive to the net.
Loreto Cavan eventually found their feet but were guilty of missing some good chances. Over the hour they had thirteen wides, compared to the Clonmel team's five.
Lauren McVeety scored Cavan's first goal after 26 minutes, but Loreto Clonmel led at half time by 1-3 to 1-2, their other first half points coming from Kellyann Hogan and Anna Carey.
Cavan's Muireann Cusack opened the second half scoring with an equalising point. Sadhbh Hallinan and Ava Fennessy were then involved in an attack that ended with Kellyann Hogan striking the crossbar, with the Cavan goalie beaten, five minutes into the second half. Cavan took the lead with an Ally Cahill point shortly afterwards and after that they never looked back, with Muireann Cusack firing home her quickfire brace of goals within minutes.
Even in defeat, the Clonmel girls were a credit to their school, their town, their county, manager Niamh Barry, their families and themselves.
Theirs was a tremendous team performance and particular mention must be made of Kellyann Hogan, Niamh Martin, Cora Maher, Orla Winston, Aine Fitzgerald, Brigita Valuntaite, Jenny Everard, Maeve Ryan and substitute Caoimhe Mulcahy, who were particularly prominent at various stages over the hour.