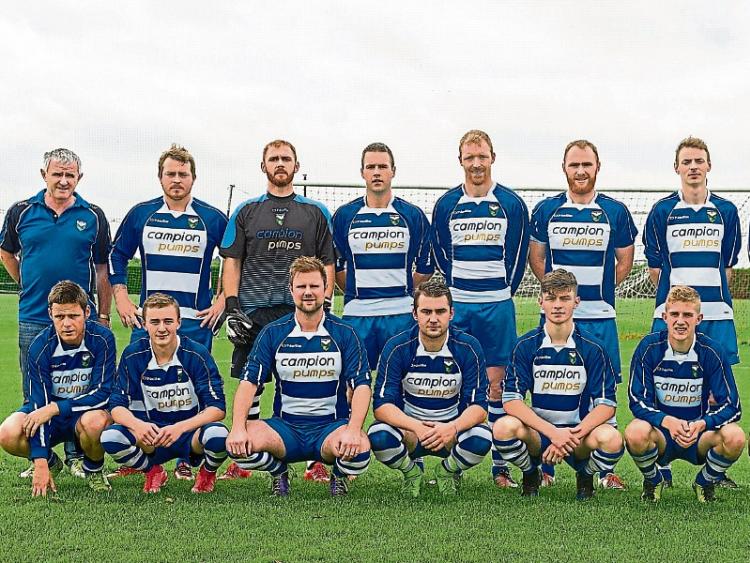 The Glengoole United team who almost certainly ensured their Premier League status for next year with a 1-0 win over Old Bridge at Green Lane, Clonmel on Sunday last.

Barring a miracle of a win against the newly crowned St. Michael’s who they play tomorrow night (Tuesday) at Green Lane, Old Bridge will be relegated from the Premier Division after a two year tenure in the top flight.

The feeling of joy and pride that surrounded Old Bridge at the beginning of the current season when they returned to their spiritual home in Green Lane,  contrasted deeply with a sense of despair on Sunday evening last, when they were all but relegated to Division One after two years travelling along the highways and byways of the Premier League.

They now need to defeat the unbeaten champions and hope that Glengoole United in turn fail to get any points from St. Michael’s in their final game of the season. If that long-shot permutation doesn’t work out in their favour ‘The Bridge’ will drop out of the top flight.

The Bridge dominated large portions of the first half and should have taken the lead on a couple of occasions. Ian Cleary hitting the crossbar on six minutes and then Martin Kennedy repeated the feat in the 20th minute being just two examples.

Glengoole United, were technically at home on Sunday last but like Old Bridge up to last season, had to play all their games on the road this season due to TSDL rules regarding grounds and facilities. The mid Tipperary outfit have not had much action for one reason or another over the past two months, and their lethargy in the first half showed that.

However two minutes into the second period they gave a warning of what they could do when a thunderous shot went just over from distance.

Kyle Ryan had a great chance for the hosts when he got through one on one with the keeper just after the hour mark but the Glengoole keeper saved well.

Chris O’Gorman then had a great effort for Old Bridge from distance that went just past the post.

Fifteen minutes from the end though, the visitors did land the sucker punch that was always a possibility in a game like this.

A breakaway from a home attack saw Glengoole’s Tommy Duggan beat the last defender to the ball and he finished well past Liam Powell in the home goal.

The visitors were then reduced to ten men when a second yellow was awarded for a handball, but they managed to hold on for three points absolutely vital points that should secure them a place at Tipperary soccer’