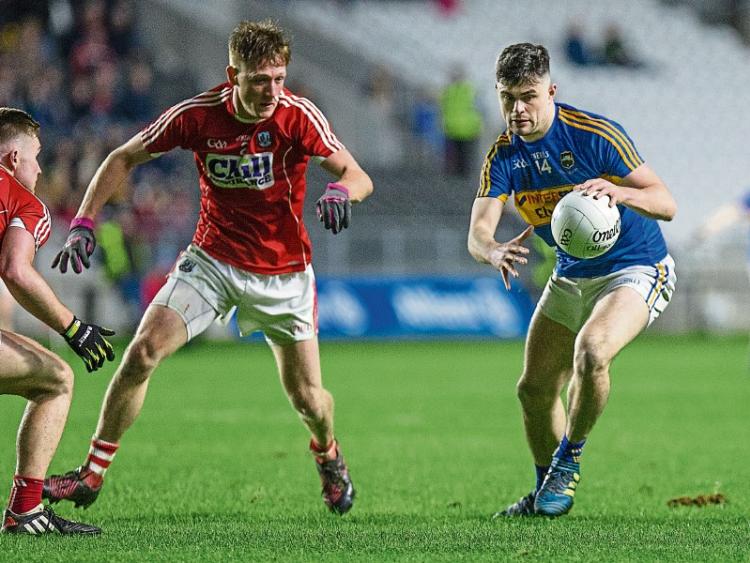 Tipp full-forward Michael Quinlivan is now one of the most feared goalscorers in the game.

As the Munster Senior Football Championship commences this Saturday with the clash of Tipp and Waterford in Thurles, there is no doubt that there is an expectation of Tipperary this year.

Many football commentators have gone on record over the past week or so in tipping Tipp to reach the Super 8s including legends of the game, Eoin Liston, Peter Canavan and Tomás O'Sé. There is no getting away from it, there is a weight of expectation this time round that hasn’t been a feature of Tipp teams in the Munster championship hencetoforth.

We we caught up with Tipp manager Liam Kearns recently he took that observation on boad saying….

“Yeah, that's the kind of progress that we are making. I think we were close to getting into Division 1 this year and that is the top eight teams in the country. I would say that we are in the top ten alright.

“So, it’s a question now of how far up through the Top  10 that we can go. But, look, that is what the championship is all about. The league is the league as I have said - I will judge us on out championship.

“So, this is our third championship season together and I think the championship is where you are judged. So, hopefully we are going to progress again this year,” added Liam Kearns. Robbie Kiely (Carbery Rangers) who will captain Tipp in this year's championship.

Like in the hurling, the football championship this year will be a newer, more demanding programme for the players. The Tipperary manager realises, particularly for counties that don’t have an over abundance of top class players, that keeping injuries to a minimum is a huge factor.

“The big thing for us is to get there (last 8) with no injuries. We got destroyed last year with injuries so we want to get there fit and ready. We are a bit concerned about the lack of game time between the league and the Waterford match, but I think Waterford are in a similar position unlike Cork who have all of the advantages.

Since 2016 when  Liam Kearns took over as manager from Peter Creedon, the upward spiral  for Tipperary football has continued with a few notable scalps taken in the past three years. But results aside, Tipperary have also won much credit for the brand and style of football they try to play.

“I think that anybody who has watched Tipperary football will know that we play to a pattern and I would say that it has been very successful in terms of where we started to where we are now.

“There have been All-Ireland semi-finals and All-Ireland quarter-finals - only two years ago we took out Galway who are now one of the top teams in the country or who are at least close to it. We won a league title as well last year and we are hard to beat in the championship. Tipp will once again look to Conor Sweeney (Ballyporeen) to point Tipp in the right direction against Waterford at Thurles on Saturday evening.

Is it a reasonable aspiration to think that Tipp are still going to be alive  in July.

“We have to beat Waterford and Cork and we have to win them in a six-day turnaround; that changes everything. There is no question: we are being put under massive pressure by that. So, that’s the reality of it. And, if we don’t beat them then we are in the qualifiers and it’s a hard road to get through the qualifiers and into the Super 8s. But if we can get over those two matches we are into the Munster final and we are one game away (from the Super 8s) and we have a Munster final against Kerry. And, we would love to be in that position: taking on Kerry in a Munster final. We played them three years ago and they beat us by ten points in Killarney, but we think we are a lot better (now) than we were then and they are in transition, maybe. They will always be hard to beat in a Munster final, but we would love to get a crack at it.

“And, if we didn’t you would still have a last 12 match to try and get to the Super 8s,” concluded, yet another Kerryman,  Kearns. Cahir's Liam Casey is a vital man around the middle of the field for Tipperary. The dual Sigerson Cup medal winner will be hoping for an extended summer with Liam Kearns' side in 2018.