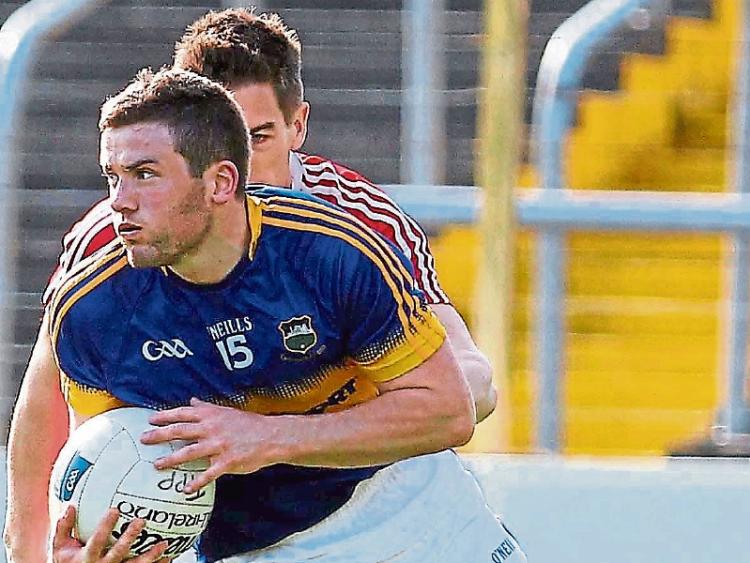 Loughmore/Castleiney's Liam McGrath who on his first championship start for Tipperary this evening scored nine points, including seven frees.

As widely expected Tipperary senior footballers overcame Waterford at Semple Stadium on Saturday evening to book themselves a semi-final berth against Cork at the same venue in seven days times.

The game was a no-thrills no-frills affair that failed to excite much at any point, but from a Tipperary perspective it was business-like in that the hosts did what they set out to do in a no-nonsense manner. Afterwards for Liam Kearns’ side it was a case of mission accomplished, let’s move on to next week and prepare for a fourth Munster championship tie against Cork in five years.

Before the throw-in Tipperary were forced to make two changes from the original team selection. Jack Kennedy started at midfield instead of the recovering Steven O’Brien, while Liam Boland came in for the injured Conor Sweeney. O’Brien did make a welcome second half appearance as a sub, but Sweeney it seems is now in a race against the clock to be fit for next week’s semi-final encounter.

With expectations on Tipp from many commentators to produce a good summer campaign, they got this potential banana skin out of the way early. Despite never having to play to their top form, Tipp were 0-6 to 0-0 up after 27 minutes and well on their way to a third consecutive championship match-up with ‘The Rebels.’

Waterford eventually did got off the mark in the 28th minute with a point from Gavin Crotty and in fairness to The Deise they finished the opening half well, narrowing the gap to four points (0-7 to 0-3) by the interval.

On the resumption Tipp moved up a notch without ever having to hit top gear and scored eight points without reply. They were 0-15 to 0-3 ahead by the 50th minute at which stage they had withdrawn Liam Boland, Kevin O’Halloran and Bill Maher as Liam Kearns gave welcome game time to Steven O’Brien, Philip Austin and Kevin Fahey. By the game’s end Jason Lonergan, Paddy Codd and George Hannigan were also introduced as Tipp emptied the bench with one eye on Cork, taking Michael Quinlivan, John Meagher and Liam Casey off as precaution.

The last 20 minutes of normal time, plus five added minutes at the end, were a case of going through the motions for both sides, but credit to Waterford they kept battling away and even had three points without reply as they finished with a mini flurry in a 0-20 to 0-9 defeat.

Waterford came to Thurles and set up very defensively from the outset and it took until the seventh minute for Tipp to score with Michael Quinlivan pointing from 30 metres out. Two frees from Liam McGrath were followed by a point from play in the 19th minute when Liam Boland delivered a fine foot pass to Kevin O'Halloran who finished the move in style.

Jack Kennedy and Jimmy Feehan tagged on points in the 23rd and 27th minute as the gap between the Division 2 and Division 4 sides became more noticeable.

Eventually in the 28th minute Waterford strung a good move of their own together with Kieran Power and Brian Looby involved in the build-up for Gavin Crotty's opening point.

After Michael Quinlivan was fouled, a Liam McGrath free extended Tipp's lead to 0-7 to 0-1 but Waterford finished with two points of their own, both from the hard-working Tommy Prendergast, certainly Waterford's best in the opening 35 minutes.

Waterford were slow to commit to attack, often leaving 14 players inside their own 45, but when they did venture forward they were capable of picking off points and had they been more accurate in front of the posts would have done even better. There was food for thought for Tipp, with Cork in mind, with this development. Both sides kicked seven first half wides.

But the opening 15 minutes of the second period put the issue to bed early with Tipp having it very much their own way.

Michael Quinlivan with a burst of pace got in around the Waterford backs to fist a point just after the restart, followed by a brace from Liam McGrath which included a fine effort from 40 metres out from open play, followed by another free.

Another free from the Loughmore man in the 43rd minute had the gap out to 0-11 to 0-3 before Tipp kicked on with points from Quinlivan, O'Halloran, Liam Boland and Josh Keane to be a dozen clear with 20 minutes to go.

Gavin Crotty with his second point of the night got Waterford back on the scoreboard at last in the 51st minute, shortly before their team captain James McGrath was black carded.

Tipp subs Jason Lonergan and Philip Austin tapped over nice points as Kearns made full use of his bench, these points separated by an excellent free kick by Jason Curry for Waterford. The Rathgormack man with the ball on the sideline at the 20 metre line under the new stand delightfully found the range. Indeed he would add two more for himself by the end, including one when he cut in from the right to score.

Conor Murray and JJ Hutchinson also managed to get on the scoreboard for the Deise before the end, with Liam McGrath adding Tipp's last three points (2 frees) before the 1,658 attendance headed home.

Tipp badly needed this game to clear away some rustiness in preparation for Cork and will have to improve no end on this performance if they are to compete with the Leesiders next Saturday. But Saturday's game was about getting through without picking up injuries or emptying the tank. They did that, and one can ask for no more.