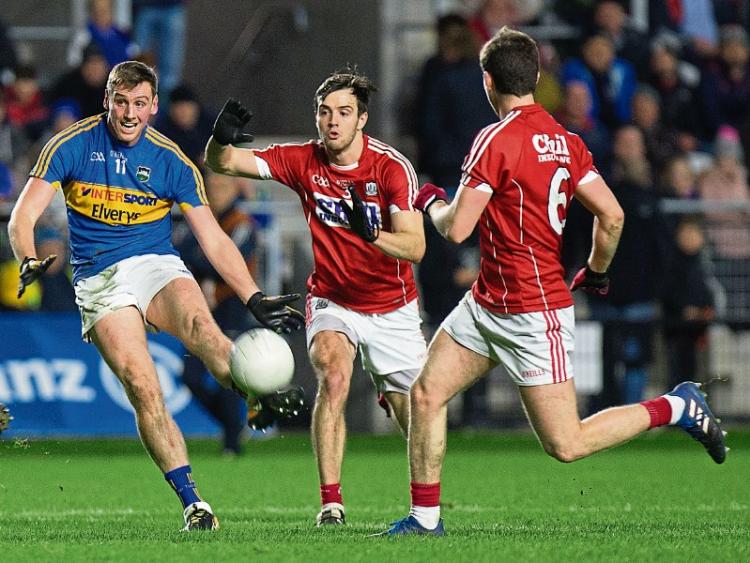 Conor Sweeney, seen here in action against Cork in the league at Páirc Uí Chaoimh, on 27th January 2018, is in a race against time to be right to face the same opposition in Thurles on Saturday next.

As the attention of Tipperary football now turns to the Munster semi-final clash against Cork on Saturday next in Thurles, a major concern for Liam Kearns' side is whether star forward Conor Sweeney will be available for selection.

The Ballyporeen man, an All-Star nomination in 2016, is in a race against time to be fit for the visit of ‘The Rebels’ as Tipperary and Cork go head to head for the third consecutive year at provincial semi-final level.

Although originally selected to play against Waterford on Saturday night last, Sweeney was replaced by Liam Boland (Moyle Rovers). The game itself against the Deise was never competitive enough for Tipperary manager Liam Kearns to risk introducing Sweeney into the action. Kearns did introduce all six subs at his disposal but with regards to his top scorer in the league (Sweeey scored 3-31 in the six games he played), Kearns was happy to let him sit it out.

Speaking after the game, the Tipperary manager was annoyed that the six-day turnaround before his side play Cork may now cost him one of his star players for a crucially important game for Tipperary.

Liam Kearns fuming over Cork being given an advantage against Tipp

He added: “If anybody else has knocks they won’t make it because of six-day turnarounds. That’s the reality of it. And it’s about recovery now. Cork have had five weeks to look at our game, we have six days to look at their game.”

Liam Casey was substituted late in the game after picking up a knock, and Kearns remarked about the Cahir man’s injury.

“I don’t think it’s too bad and I hope it isn’t. But again we have to assess all that. We are going away straight away now out to do a recovery session, something that we wouldn’t be doing if we didn’t have a match to play in six days time,” again driving home his total dissatisfaction at the decision of the Munster CCC in fixing this game for Saturday next.

Tipperary first choice midfielder Steven O’Brien didn’t start against Waterford either as he was recovering from an ankle knock, but Kearns introduced him for Jack Kennedy after 44 minutes in order to check out his fitness. The Ballina man, will be vital for winning possession in the expected midfield battle against the Leesiders on Saturday next. O’Brien certainly launched himself into action and looks to be in good shape for a huge job ahead.

“Steven O’Brien had a knock on his ankle as well and he came through ok. We wanted to see if he was fit or whether he was up to it or not with a view to the game the next day. Hopefully he will be alright,” concluded Liam Kearns regarding the injury situation with his players.