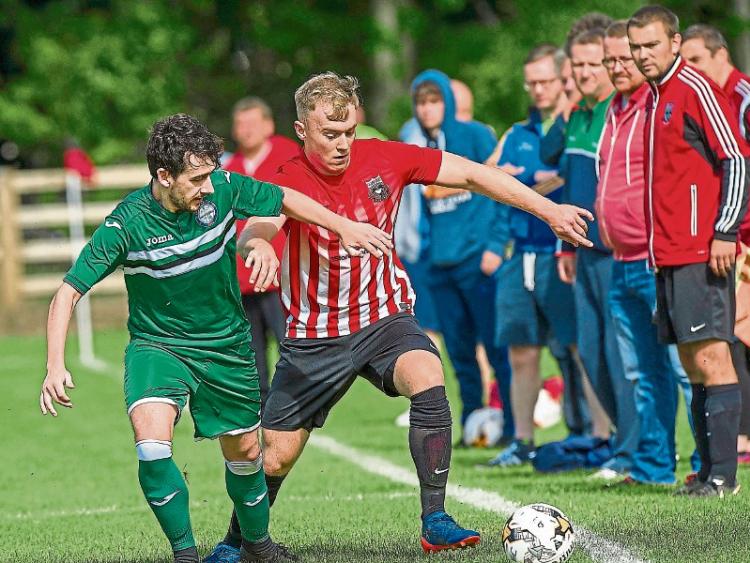 Chris O'Gorman (Old Bridge) hugs the sideline as he tries to get past Niall O'Brien (Clonmel Celtic) in a league game played at Green Lane. Assistant manager for Old Bridge, Stephen Kearns, watches on

The TSDL soccer season comes to its conclusion tomorrow night (Friday) with the last fixture of the season and what a contest is in store as Old Bridge and Glengoole United battle it out in a Premier League relegation play-off.

The game which goes ahead at 7.30 pm at Celtic Park (on the By-Pass) in Clonmel, is a winner-takes-all-loser-gets-nothing tie. The victors will secure their place in the top flight of TSDL football for the 2018/2019, while for the vanquished it will be the disappointment of dropping down a level to Division 1.

It has been quite a season for both clubs for different reasons.

The Old Bridge returned to their spiritual home at the picturesque Green Lane on the banks of the River Suir in Clonmel last September having been in exile at Ferryhouse for many years as Clonmel underwent its flood relief plan. While in the Premier League, the two previous seasons, the Clonmel side had to play 100% of their games away from home, and despite that disadvantage they held their top spot.

Glengoole United, a tiny club from the New Birmingham area of mid Tipperary, have been in that same situation this season in the Premier League. Because they do not have proper dressing room facilities, the TSDL insisted that they must play all their fixtures away from home and they have done so heroically. That they are still battling for survival right at the death is a testimony to their commitment.

The sides have met twice already this season in the league, and with both games played at the Clonmel venue, the results have gone the way of Glengoole United on both occasions.

Earlier in the season Glengoole made the trip in to Clonmel a profitable one, snatching a 2-1 victory and only a few short weeks ago repeated the dose winning 1-0 with a goal scored by Tommy Duggan. Despite being reduced to 10 men and put under huge pressure by the Old Bridge, Glengoole United managed to hold out.

When the final whistle blew that day, all seemed lost for the Clonmel side, having gone three points behind Glengoole in the survival race, but both still had one game left to play – against the league champions, “The Mighty Michaels.”

Amazingly, Old Bridge turned the tables on the Tipperary Town team, winning 1-0 via an Aaron Arrigan goal. It would be the only loss that the Saints would suffer all season in the Premier League. It threw the Clonmel side a lifeline. Glengoole United will be hoping Michael Rafter (above) will have his shooting boots on once more tomorrow night against Old Bridge in the Premier League relegation play-off.

And so the final game of the regulation league saw Glengoole United visit Cooke Park needing a draw to secure their top flight status. It didn’t happen for them though as St. Michael’s cruised home to a comfortable 6-0 win.

And so the scene is set for a shootout at the Ok Corral on the By-Pass tomorrow night. Only one man will walk out alive.

‘The Bridge’, mightily relieved to even have this chance, will be missing three of their starting 11 due to work and holidays, and that is a big blow to their chances.

Stephen Kearns, assistant manager at Old Bridge, said today "The game is huge for us mainly after all the work that has been put in by the committee and because of all the support the club has had from the Old Bridge community, particularly over the past 12 months since their return home.”

“We don’t want to go back to Division 1. We are a Premier League club with good facilities now and with one of the best pitches and picturesque grounds in the league.”

He continued “It is important we stay up as going back to Division 1 would be very tough to take after doing all the hard work in getting Green Lane up and running. We managed to stay in the Premier League two years in a row while playing all our games away from home, so it would be very disheartening now to go down. There would be no guarantee we would come straight back up from Division 1 as it is a very tough league to get out of.”

A bonus of staying in the top flight for Old Bridge, (who realise that having lost twice already to Glengoole this term they have a big challenge once again) is that it would help them attract more players for next year which is most important in a very competitive league.

Stephen added “We have never stayed up for more than two years in a row, so for this young team it would be a milestone if we survived again this year. It would help us no end in building the club more in the coming years because the club has the ambition to be a solid TSDL Premier League club, year in year out.”

“We want to move the club forward now and hopefully bring in schoolboy teams and a youth team in the coming years so being a top flight club can give us more pull in the town with regard recruitment. Our club is moving in the right direction now and we want to maintain that momentum. Prior to this, because we were a team and club who had barely any players and no facilities few really wanted to join us. But it is different now. Now we have a 'professional set up' which makes us a good option for players to join forces.  But there is still more we can do in the coming years,” concluded Stephen.

A lot rides on the result tomorrow night for both Old Bridge FC and Glengoole United. It promises to be a cracker!