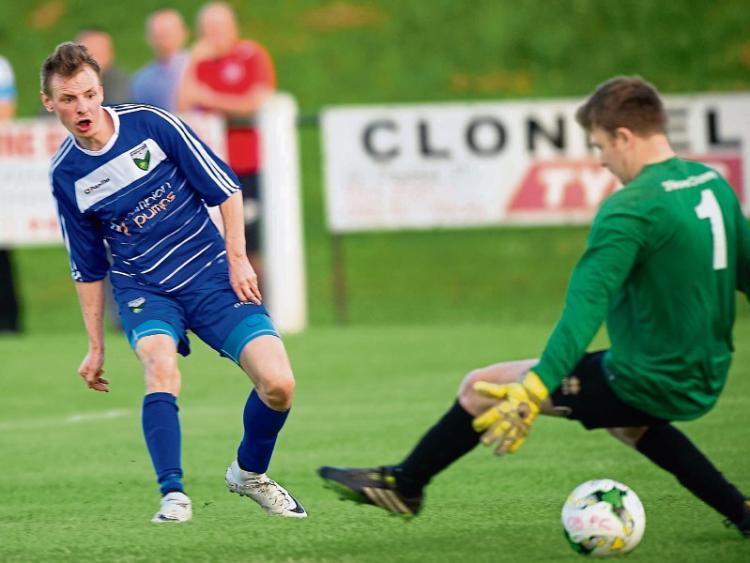 Glengoole United secured a precious 2-1 victory over Old Bridge in the Premier League Relegation Play-Off this evening (Friday) at Celtic Park, Clonmel, a result that sees them retain their top flight status for next season.

Goals from Danny Rafter and Tommy Duggan were enough to see the mid Tipperary side safe, and deservedly so for a team who had to play all their games away from home throughout the campaign because of TS&DL rules regarding facilities at Premier League clubs.

It was the third meeting of the sides this season, and remarkably it was a third victory for the New Birmingham outfit – on that statistic alone Old Bridge can have few arguments.

But 'The Bridge' will have their regrets at the end of the season, and particularly tonight, because in terms of possession on the park the Clonmel side had the better of things. However goals count and no doubt the boys in blue and white made the most of their fewer opportunities to snatch the all-important victory. It was a tentative start to the game from both sides understandably with so much at stake. Old Bridge came closest in the first quarter to a goal when a long-range effort clipped over the crossbar. The game’s opening goal eventually came in the 23rd minute, when a slide rule pass sprung ‘The Bridge’ offside trap and Danny Rafter finished superbly low into the corner of the net from 12 yards out.

Rafter, looking dangerous with his pace, was then taken down by the Old Bridge keeper, Liam Powell, just inches outside the penalty area in the 32nd  minute – the Clonmel custodian very fortunate indeed to get away with just a yellow card. At the other end Old Bridge’s Kyle Ryan had two half-chances in the 34th and 36th minutes, the first in particular forcing a good save from Paul Hanrahan in the Glengoole United goal. The mid Tipp went to the break 1-0 up and looking reasonably comfortable with their advantage.

Old Bridge had the better of the opening minutes of the second period. A good run down the right wing culminated in a cross by Aaron Arrigan falling to Shane Leahy whose shot was well saved by Hanrahan. Increasingly the Clonmel side were beginning to look dangerous when using the flanks.

The hard-working Martin Kennedy was then taken down inside the penalty area five minutes into the second half presenting Old Bridge with a spot kick and a gilt-edged chance of an equaliser. Agonisingly for the Clonmel side Chris O’Gorman thumped the opportunity off the crossbar and Glengoole United breathed a huge sigh of relief.

Still the town side came forward and after Eoin Leahy crossed both Martin Kennedy and Aaron Arrigan had efforts superbly saved in a double effort by Paul Hanrahan to keep his side in front.

As the game wore on Glengoole United understandably retreated into defence more and more, for the most part limiting Old Bridge to hopeful long ball crosses which John McMenamin and Shane Hanrahan at the centre of defence dealt with in the main.

Having left a penalty chance behind them already, Old Bridge committed football’s version or hari-kari 10 minutes from time. Having been awarded a free on half-way, the short lateral pass failed to find its intended target, and Glengoole United's Tommy Duggan  proceeded to lob Liam Powell in the Old Bridge goal from 35 metres out for a scarcely deserved 2-0 lead. But Duggan, who also scored in the recent league game between the sides at Green Lane, was making no apologies for his opportunism. There could be no way back for the Old Bridge side from yet another setback. Five minutes from time, Old Bridge substitute Danny Hogan – not long on the field – was rightly red-carded for an over-the-top tackle which also saw Glengoole’s Michael Heffernan dismissed for retaliation.

Three minutes from time, Old Bridge got their ninth life of the season it seemed when Ciarán Stapleton drove low through a ruck of players and into the bottom of the net for 2-1. But 'The Bridge' had finally, at the end of a long season, run out of lives and time and so will now play in Division 1 next season.

Glengoole United were deserving of their victory and retaining their Premier League status. All players worked tirelessly over the 90 minutes with an overworked defence limiting their opponents as best they could whilst the likes of David Slattery, Stephen Holohan, Tommy Duggan and Danny Rafter causing most problems in attack. Paul Hanrahan was excellent between the sticks.

For Old Bridge it was a case of too many mistakes and missed chances but there can be no faulting the efforts of Martin Kennedy, Aaron Arrigan, Eoin Leahy, Kyle Ryan, Gavin Power, Noel Walsh and Stephen Kearns on the night. It is a disappointing setback for this ambitious club, but they will be back in the top flight before long.