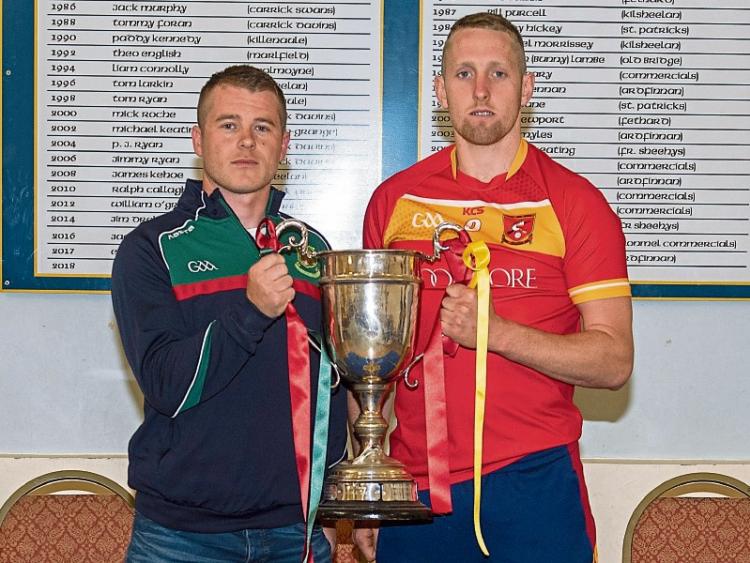 ONE HAND ON THE CUP! Kevin Walzer (Mullinahone) and Thomas Keaveney (Killenaule) had a firm grip on the South Tipperary SHC trophy. But where will it be going after next Sunday's (22nd July) final.

The South Tipperary Senior Hurling Championship may have seen the addition of an extra club this year in the form of St. Mary’s, fresh from their county intermediate win of 2017,  but the new-look format has still produced a very familiar final pairing.

In 2014, 2015 and 2016, these neighbours met in three consecutive finals and in all three games only a puck of the ball separated them at the finish. Both teams expect it to be no different at Clonmel Sportsfield this time around.

In 2014 Mullinahone came out on top by 2-11 to 2-8, the Kickhams holding off a late surge from Killenaule. Twelve months on, ‘The Robins’ triumphed in an absorbing duel, edging ahead of Mullinahone with a strong finish to win by 0-21 to 2-13. And in 2016, Eoin Kelly was the match-winning hero six minutes into added time when he won a free for himself near the sideline and pointed from 45 metres  free into a swirling wind for a 2-15 to 1-17 win for the “Green above the Red.” It was a score that gave an emotional six-times All-Star great pleasure for the honour and glory of the little village.

And so it is once more onto the breach once more, as ‘The Robins’ and ‘The CJK’ converge on the Western Road on Sunday next. Some of the representatives of both Mullinahone and Killenaule who attended the launch of the Clonmel Oil South Senior Hurling Championship Final at the GAA Centre in Clonmel on Friday. In centre are Kevin Walzer (M), Hugo Browne (chairman South Board) and Thomas Keaveney (joint captain K).

Killenaule opened this year’s South campaign back in April with a hard-fought four-points victory over the reigning champions, Carrick Swan, winning by 2-19 to 1-18. The closely contested game, played at Monroe, was only put to bed in the 61st minute when Killenaule substitute Eoin Barry goaled.

In the semi-final they had an easier time of it when getting the better of newcomers St. Mary’s winning by 1-23 to 0-18 in Fethard. On that sun-blessed April evening John O’Dwyer was in top form and ended with a personal tally of 1-13.

Mullinahone, had only the one game in their journey to the final, their comfortable semi-final win over Ballingarry in Clonmel back in April when they cruised home by 2-16 to 0-10.

And so onto Sunday’s final where trying to predict a winner based on form or past achievements is next to impossible. South senior hurling finals take on their own individual dynamic each year once the ball is thrown in. What isn’t in doubt is the potential of both sides who are evenly matched with blends of experience and youth, both sprinkled with players past and present who have worn the ‘Blue and Gold’ with pride and honour.

‘The Robins’ can depend on the likes of John, Joe and Killian O’Dwyer, Thomas Keaveney, Kieran Bergin, Paudie Feehan and Festy Kerwick (if available), all outstanding hurlers on any given day. ‘The Kickhams’ have the four Curran brothers contributing as ever, Eoin and Paul Kelly, Kevin Walzer, Eoin Fennelly, Jack Shelly, A.J. Cronin, players young and not-so-young that never leave anything behind them in a South final in terms of effort and commitment.

However, having won only one of the last four final appearances and losing twice to Mullinahone in those years, Killenaule will be in no mood whatsoever to leave the Western Road on Sunday without some silverware. That alone should drive them up an extra gear and they get the vote for victory this time.