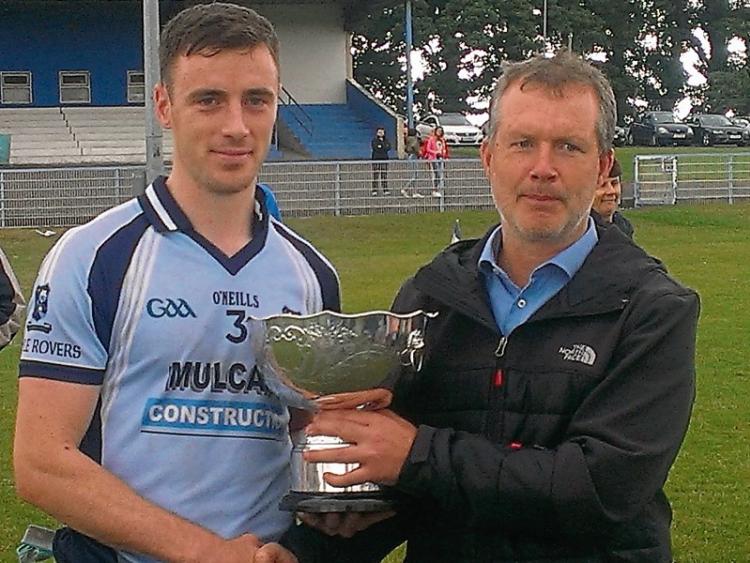 Even if there is only an egg cup on offer, these two great rivals Clonmel Commercials and Moyle Rovers, enjoy nothing better than a win over the opposition. And so it was also on Sunday morning at New Inn when in the final of the County Football League Division 1, both sides served up a well-contested and exciting final that needed extra-time to produce a winner.

At the end of the day the spoils went to the Monroe side, but for almost the whole of normal time it looked as if the town side would prevail - and if they had taken a couple of goal chances that came their way they probably would have.

With four minutes to play Commercials were four points clear and it looked like the Dr. Clifford Cup was heading into Clonmel, but a brilliant goal 90 seconds from the end saved the Rovers. A ball was kicked up the right wing which Sean Carey did well to win possession of, only to be fouled. Luke Boland had the presence of mind to deliver a quick free to Rian Quigley and the Rovers corner-forward burned his marker for pace to slide a low equaliser to the net past Jake McDonald. It was a class finish from a lad just out of minor grade. Moyle Rovers captain Alan Campbell and goalscorer Rian Quigley were well pleased with the side's victory over Commercials at New Inn this morning.

In the time added-on at the end of normal time, Commercials got two mid-distance frees for which to grab what they probably felt should have been theirs, but both attempts faded just wide of the upright and so extra-time was needed.

For extra-time Moyle Rovers came out with all guns blazing and went four clear within eight minutes and led by 1-12 to 0-12 at the break. As expected Commercials were equally fired up at the commencement of the second period and within two minutes points from Pauric Looram and Seamus Kennedy had it back to the minimum as the tension rose to an even higher level.

But as he had started the scoring almost an hour and a half earlier with the game’s opening point – incidentally it was the only time the Rovers led in the whole of normal time – Shane Foley finished with a brace of late points in extra-time to secure the silverware for the Powerstown/Lisronagh side. Foley had come back on at the beginning of extra-time having been substituted earlier.

With these sides booked in to meet in a South semi-final over the coming weeks, and perhaps a potential clash again in the County Championship later in the year, today’s game serves as a good appetiser of what might follow later.

For those who say “it is only the County League” there was no evidence that either side were not fully committed to winning this one. Within a minute Shane Foley had the scoreboard up and running with a nice point but Commercials definitely had the most of the first half possession with Seamus Kennedy very prominent around the middle. Two frees from goalkeeper Jake McDonald and Michael Quinlivan and a fine left legged score from the county senior hurler Kennedy had Commercials 0-3 to 0-1 up after 19 minutes.

But it should have been so much more for Commercials. At the midway point of the first half they got two superb chances of goals and converted neither. Michael Quinlivan put a sweet pass into the hands of Shane Flynn but his low effort went inches wide. And almost immediately, following a well-worked move between Kevin Fahey and Stephen Kelly put Conal Kennedy in the clear he too blasted low and left. The profligacy would come back to haunt Commercials.

It took Rovers until the 22nd minute to get their second score of the game when a pass from Luke Boland put Rian Quigley free and he composed himself well to score. And from the kick-out team captain Alan Campbell set Liam Boland free and from 30 metres, the game’s top scorer obliged.

A converted 45 by the Commercials keeper Jake McDonald after 26 minutes restored the advantage and Quinlivan with a close-in free doubled it to two. Liam Boland then kept Rovers ticking over with a point from 45 metres. But Commercials finished the half the stronger with two excellent points from former All-Star Quinlivan, who was, as he always does, providing Rovers with a huge task in trying to contain him.

Down by 0-7 to 0-4 at half-time, Rovers wasted no time when they got the breeze behind them and within two minutes had the lead down to the minimum. A Liam Boland free - awarded after an advantage had seen McDonald make a super save from Rian Quigley - was quickly followed by a point from play from Boland after Richie Power had made the space possible.

But it looked as if Commercials had weathered that storm when three unanswered points from Conal Kennedy, and two MQ frees, had them 0-10 to 0-6 up midway through the second half.

Liam Boland and Michael Quinlivan shared frees and with just two minutes left on the clock and four points down it looked curtains for Niall Fitzgerald’s team. But after Aidan McGrath was fouled Liam Boland narrowed the difference to just three and they were back within striking distance if they could sneak a goal.

And that’s exactly what they did when Rian Quigley saved their skins with a cool goal low into the corner past McDonald who up to then looked unbeatable have pulled off a couple of great saves.

Michael Quinlivan got two chances with frees with the clock in the red but for once he had no luck and so Sean Everard blew for extra-time.

Forty seconds in Ross Mulcahy pointed from almost the corner flag after good work by Brian Gleeson and Rian Quigley to give Rovers a lead they last held an hour previously. Quickly they made hay with Sean Carey doubling that lead four minutes in when he slotted over from 30 metres out. And when Liam Boland kicked two frees, won by Quigley and Carey respectively, suddenly Moyle Rovers could do no wrong.

Rian Lambe kicked a point from 35 metres just before the half-time break to give the town side hope with just a goal between them at the break 1-12 to 0-12.

Pauric Looram and Seamus Kennedy within two minutes of the restart had white flags for Charlie McGeever’s side to put the game back in the melting pot as Commercials with a last throw of the dice sent on Jason Lonergan in an effort to wrestle back the game. But Rovers were in a determined mood not to bow. In a gut-bursting run Brian Gleeson and Ross Mulcahy ran the length of the field exchanging hand passes to set up Shane Foley to score. And just before the final final whistle of the day Shane Foley got in around the defence to fist over the game’s final score.

Rovers' man of the match though for his great workload all day was David McGrath who time and again took the game to Commercials from the half-back line and was ably assisted in defence Alan Campbell and Jack Harney. The clash of county titans Campbell and Quinlivan was interesting also. Richie Power and Aidan McGrath worked hard in the middle while in the forwards while Liam Boland was the go-to man Ross Mulcahy, Rian Quigley and Shane Foley all had special moments.

Michael Quinlivan stood out head and shoulders above the rest with pace and power and it will be a worry for Commercials if he has to sit out any games this season. Seamus Kennedy must have been fouled a hundred times, the Rovers obviously aware of his threat as a builder. Kevin Fahey, Donal Lynch, Shane Taylor all put in good shifts too.

Commercials will be disappointed have missed a few golden opportunities. They were missing the likes of Jack Kennedy, Kevin Harney, Michael O'Reilly, Ross Peters. They will be back and soon.