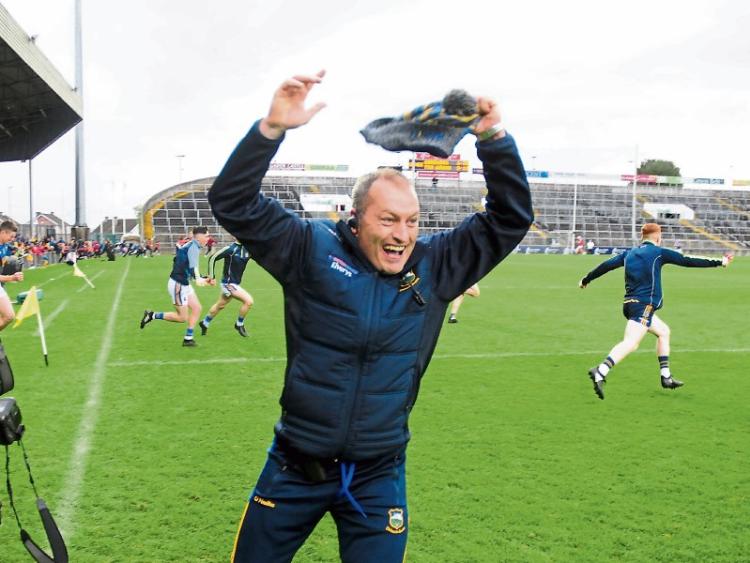 We did it! Manager Liam Cahill celebrates after Tipperary beat Cork in Sunday's Bord Gais Energy All-Ireland U-21 Hurling Championship Final at the Gaelic Grounds in Limerick

Liam Cahill says he would "love" to sit down and talk with the people choosing the next Tipperary senior hurling manager, if the opportunity arose.

Speaking shortly after his Tipperary team beat Cork in Sunday's Bord Gais Energy All-Ireland U-21 Hurling Championship Final, he added "whether I'm right or ready for the job, I'm not sure.

"I'd like to remain where I am, I know I'm talking straight off the cuff now.

"I feel for me, maybe at the moment, the right place for me is with next year's U-20s and get another year under my belt and then see if the opportunity comes around again.

"(But) There's no time like the present, I'll sit down and see if I'm approached. The bottom line is that the manager's appointment is big but really it's whoever is on this man's ticket is going to be the key. And I think the Tipperary public know that as well.

"There has to be a major shake-up in this Tipperary squad and thankfully these players today, it might be a bit soon for them, but they're nipping nicely on the heels of some of the guys in the Tipp senior set-up that feel that maybe they're in the comfort zone for the last year or two. We'll see what will happen".

The Ballingarry man - who has now guided the county to All-Ireland Minor and U-21 success in the past three seasons - was quick to pay tribute to his team, after they beat hot favourites Cork and reversed the result of the Munster Final, when Cork defeated them by 13 points. Above - The cup that cheers. There were joyous scenes in the dressing room for Liam Cahill and his players after they defeated Cork in Sunday's Bord Gais Energy All-Ireland U-21 Hurling Championship Final

"At the end of the day you can put the plaudits on the management and the players and all of that, our management in particular, but really it's down to the players.

“The players worked their socks off, they hurled to instructions and they were just incredible to pick themselves up the way they did after the Munster final. It's all credit to the players.

"These are a very capable bunch of young men, I've always said that, they're a credit and a testament to the work that's being done at underage in Tipperary.

“I've always said it, that maybe we don't do everything right (in Tipperary) but we do a lot of things right, and thankfully a lot of our development squads were in the shake-up as well yesterday in their respective tournaments and that augurs well. "They worked hard, they were honest, they communicated well and they had to. That Cork team would cut you open with pace very quickly, and we had to have our wits about us all the time, and we showed no panic.

"We were coming into this All-Ireland Final with no real expectations, and for a Tipp team to come into an All-Ireland with no pressure just made the job a little bit easier.

"It was a vital win for Tipperary people. Their teams to follow were cut short enough this year and we love our hurling in Tipp.