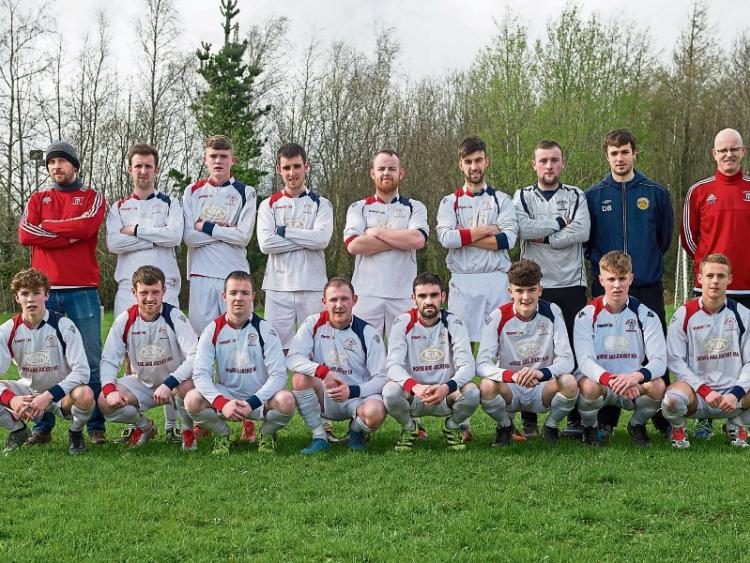 Ballyneale continued their excellent run of form and joined Kilmanahan United in third place in the Clonmel Credit Union Second Division when they had a good win over those opponents by the odd goal in five on Sunday.

The first half was a flaccid affair, never reaching any great pitch, but five minutes into the second period the visitors stirred the game to life with a brilliant goal scored by Derek Hopper McGrath. It was exactly what the home side needed to spark themselves into life however and no one rose to the occasion better than Dwayne Fogarty. Three goals in 15 minutes by the ‘on fire’  striker had his side in front and looking like they were going to be satisfied with a very good days work.

A goal two minutes from time by Damien Gregory of Kilmanahan made it a nervy final few minutes, but the home side held on.

The home side went into this game on the back of a couple of bad weeks, especially their loss in the Shield last weekend, and really needed both a performance and a result lest they found themselves cut adrift from the battle for promotion at the top end of the table.

They lost one of their main defenders in the warm up but finally started to have some luck when they were awarded a penalty in the fourth minute of the game, which was fired home by Pierce Larkin.

Their defensive frailties were shown again though shortly after when a free into the host’s area wasn’t dealt with and James Murphy headed Burncourt level.

Kilsheelan then lost their second centre half to injury in the 23rd minute but their attack continued to fire and they re-took the lead just after the half hour mark when Kevin Kirwan volleyed to the net.

That was how the game went at the break and the home side doubled their lead two minutes into the second half when Jamie Cronin got on the end of an Eddie Sweeney cross to head home.

Dominant now, the hosts were unlucky on more than one occasion not to score more, but were punished for not adding to their lead when Dylan Price fired home a long range effort in the 59th minute.

The same player scored again five minutes later to cap the visitor’s comeback, and although both sides had chances in the last ten minutes of the game, the points were ultimately shared.

Cashel Town kept their 100% league record going as they chase down the top of the Second Division in the hope of adding promotion to their Shield success, with another comfortable win at home to Donohill  at the weekend.

The hosts were at their opponents from the start and took the lead in the seventh minute when Brendan Ryan took advantage of some good build up play to finish from inside the area.

After that the game settled down as the visitors more than put it up to their hosts and there were no more goals in the first half.

The second period started as the first finished with Donohill putting up stern resistance, but eventually the class and fitness of the home side wore them down and Cashel doubled their lead just after the hour mark when Darragh Browne scored an excellent goal.

They scored the decisive third with ten minutes left through David Butler, and then added the coup de grace in the final moments of the game with a well taken effort by Gerry Horgan.

KEEP UP TO DATE with all Tipperary Sporting action on TipperaryLive.ie