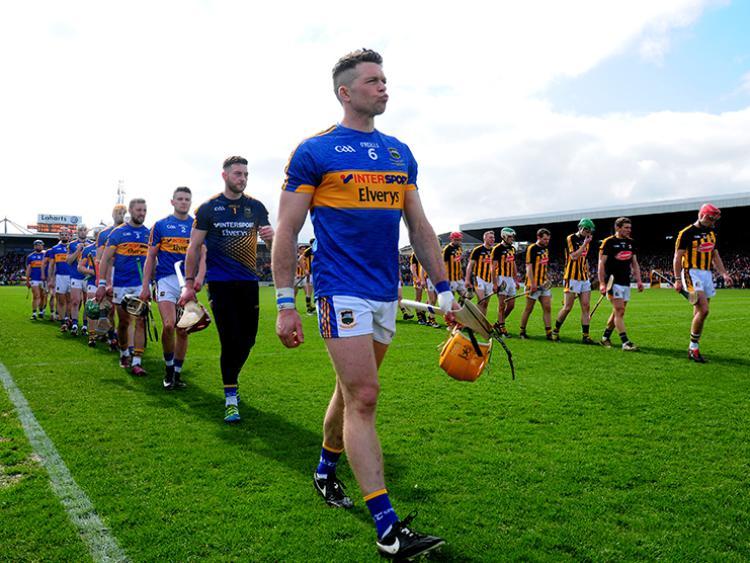 Pádraic Maher pictured leading Tipperary through the parade prior to the 2018 Allianz National Hurling League final defeat suffered at the hands of Kilkenny. Photo: Eamonn McGee

County Board secretary Tim Floyd has pin-pointed the Premier County’s league final defeat suffered at the hands of Kilkenny as the “root cause” for Tipperary’s disappointing hurling year. In his report to this year’s convention - scheduled to take place in The Dome at Semple Stadium, Thurles on Monday, December 17th - Mr Floyd (Newport) argues that the six-point defeat (2-17 to 2-23) at Nowlan Park on April 8th was the “biggest factor” which contributed to Tipperary failing to win a game in the Munster championship.

“The biggest factor, in my opinion, was losing the league final to Kilkenny on April 8th and the manner in which we were defeated,” writes Tim Floyd in his report to convention.

“Many of the positives gained in the lead up to the league final were reduced to frustration and confusion. As the defeat was not as bad scoring-wise as the 2017 league final hammering by Galway, this one hurt even more because it was déjà vu against Kilkenny in Nowlan Park, with it being our eighth loss against them at this venue in ten years,” Mr Floyd adds in his report.

“This loss did serious damage to the players’ mind-set apart from unsettling the whole structure of the team,” Tim Floyd reports.

“It’s ironic that our best performance was in our final game against Clare which brings me back to my original point that the league final defeat was the root cause of Tipp’s disappointing year,” reports Tim Floyd.

With reference to the league final defeat Mr Floyd reveals that although the Premier County led by two points at half-time “Tipp fell apart in the second half” and “frustrated players and supporters left Nowlan Park very disillusioned”.

Similarly, following the opening round defeat suffered at the hands of Limerick in the Munster championship Tim Floyd describes how Tipperary supporters left the Gaelic Grounds frustrated “having seen their team out-witted and out-played by a more hungry and sharper Limerick side”.

Please click here to read a summary of the motions to this year's convention - the motions are dominated this year by the controversial age grade issue.

“Pride of place” in Tim Floyd’s report goes to the Tipperary under-21 hurlers who suffered a “humiliating defeat to Cork in the Munster final, but rose from the ashes to defeat the same opposition in the All-Ireland final” (3-13 to 1-16) at Páirc na nGael, Limerick.

“Tipperary celebrated the sweetest of all victories. Turning around a thirteen-point defeat in a Munster final to win an All-Ireland over the same opposition by one goal seven weeks later is the stuff of dreams. Full credit to the players who showed there is still a fighting spirit in the next generation of Tipperary hurlers,” reports Tim Floyd.

The Newport man also singles out the Tipperary under-21 management team for special praise: “No better man than manager Liam Cahill to instil this passion and belief and with the guile and astute coaching of Mikey Bevans plus the experience of selectors John Sheedy, Sean Corbett and TJ Ryan, this victory was plotted carefully since the Páirc Uí Chaoimh disaster. We owe them all a big debt of gratitude for restoring pride and passion in Tipperary hurling.

“This group, along with our Munster minor hurling champions, were our saving grace in an otherwise frustrating year,” reports Tim Floyd before insisting that Tommy Dunne’s minor hurling team showed “class and great passion” in their Munster final win over Limerick, but, sadly, “never played to their full potential” against Kilkenny in the subsequent All-Ireland minor semi-final.

In his report to convention the County Board secretary describes the senior footballers’ defeat at the hands of Cork in the Munster semi-final as a “dismal” display (0-9 to 1-17) while the subsequent loss to Mayo in the All-Ireland qualifiers is described as a “brave” performance.

Mr Floyd argues that against Cork “Tipp never got up to the pace of the game and were a big disappointment as this was a major setback to the consistent progress that was made in recent years”.

Tim Floyd also notes that all of the Tipperary club champions were beaten in the early stages of the provincial series which “raises a lot of questions on the standard of our clubs and possibly our structures”.

Reflecting on the new club and inter-county “ground-breaking” championship structures County Board secretary Tim Floyd suggests in his report to convention that should the Tipperary inter-county teams exit their respective championships early that the domestic club championships should resume earlier.

Meanwhile Tim Floyd (Newport) asks if it is “really necessary” to commence our provincial club championships in October-November and wonders if these championships could “be deferred to January”.

“We are only talking about one club team from each county in each grade competing in the provincial club competitions and to be ready for this we are cutting short the playing season for all the other clubs as we frantically rush our championship to meet the deadline(s),” writes Tipperary secretary Tim Floyd.

“We should be extremely thankful to those who do and for their bravery and commitment we should praise and encourage them all we can. There is a massive mind-set change required in the GAA and it must come from the top down. We cannot accept any kind of approach to a referee, before, during or after a game. As officials we must stand by our referees and take every possible step to protect them,” writes Tipperary County Board secretary Tim Floyd in his report.

“Let’s show more appreciation within our county and encourage all our referees and umpires. We should all have the courage to stand up to those spectators, mentors and officials who harass, abuse, threaten and hurl foul language at our match officials,” reports secretary Tim Floyd.

“On the financial front we are on a solid footing with no loans, no deficit being carried over from 2018 and a brand new sponsor,” Tim Floyd reports to the county convention before welcoming Teneo as the new inter-county team sponsor.

“We look forward to a successful partnership with them over the next few years. We have top class management over our six inter-county teams and no effort will be spared to bring success to Tipperary. We are in a good place and we are privileged to be part of it,” writes Mr Floyd.

The Newport man has also revealed that “club gate receipts are improving each year and are heading towards the half million euro mark” while the plans are “well advanced for a new €6m development in the Kinane Stand in association with the Semple Stadium management committee”. Indeed, the County Board hope to proceed with stage one of the development in 2019.