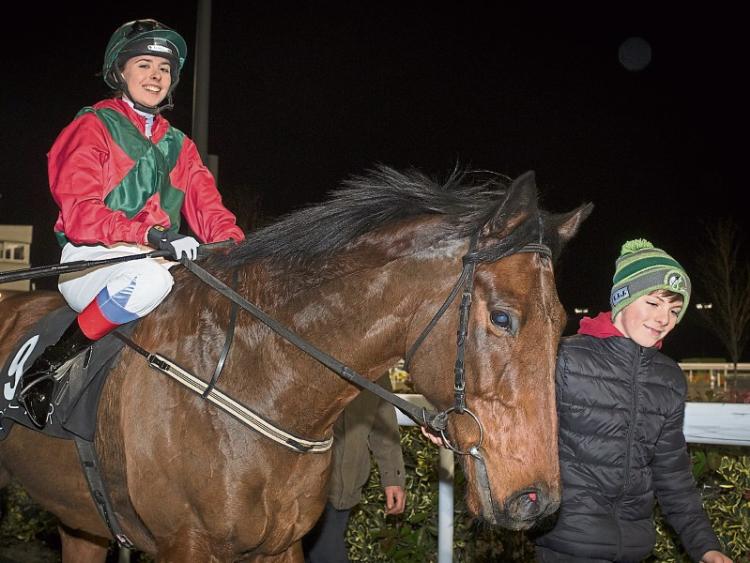 Emma Doyle on Northern Surprise after her win at Dundalk

It was a dream start to her career in the saddle for Moyne teenager Emma Doyle who rode a winner on her first ride when successful on Northern Surprise, trained by her father Tim, at Dundalk on Friday night.

A business and marketing student at NUI Maynooth, the 19-year-old brought the 20/1 chance from well off the pace to pip his stable companion Northern Surprise by a neck. Both the winner and runner-up were bred by Jim Monaghan and the winner carried the colours of Emma’s mother Claire, a former amateur rider whose winners included the Ladies’ Derby at the Curragh on Up She Flew in 1994.

Also on the mark at Dundalk was Ben Coen who partnered Ahlan Bil Zain to a comfortable success in the 7f rated race. The 4/1 winner is trained on the Curragh by Michael Halford.

Denis Hogan enjoyed great success throughout 2018 and he rounded off the year on a high when both training and riding Barna Venture to win the handicap chase at Punchestown on New Year's Eve. Sent off a 7/2 co-favourite of three horses, the Brid Collison-owned gelding had little difficulty in accounting for his market rivals Whatinthecorner and Monatomic.

It got better for the Cloughjordan man who sent out Amanaat to land the opening 5f handicap at Dundalk on Friday night. Ridden by Donagh O’Connor for owner James McAuley, the 8/1 chance beat the Andrew Slattery-trained Smart Stinger in good style.

Rachael Blackmore was undoubtedly the star of 2018 and she had the distinction of riding the first winner in Ireland in 2019 as Notebook landed the 2m maiden hurdle at Tramore on New Year's Day.

She had the 9/4 chance in front at the second last hurdle and made the best of her way home on Henry De Bromhead’s charge to win from the Willie Mullins-trained 13/8 favourite Janidil. The pair followed up a couple of races later as 2/1 favourite Mormon beat stable companion Insult by two and a quarter lengths in the 2m5f maiden hurdle.

Philip Fenton was back among the winners as Secret Cargo won the 2m handicap hurdle at Tramore on New Year's Day. Ridden by Brian Hayes, the 25/1 shot was running in his first handicap and scored readily under Brian Hayes.

The final winner of the week was the Harry Kelly-trained Aliym which won the bumper at Naas on Sunday in the colours of the Paul & Paula Nolan Partnership. It was a fifth career success on the racecourse for winning rider Paul Cawley who got the 20/1 chance home by a short-head from 11/8 favourite Top Moon.