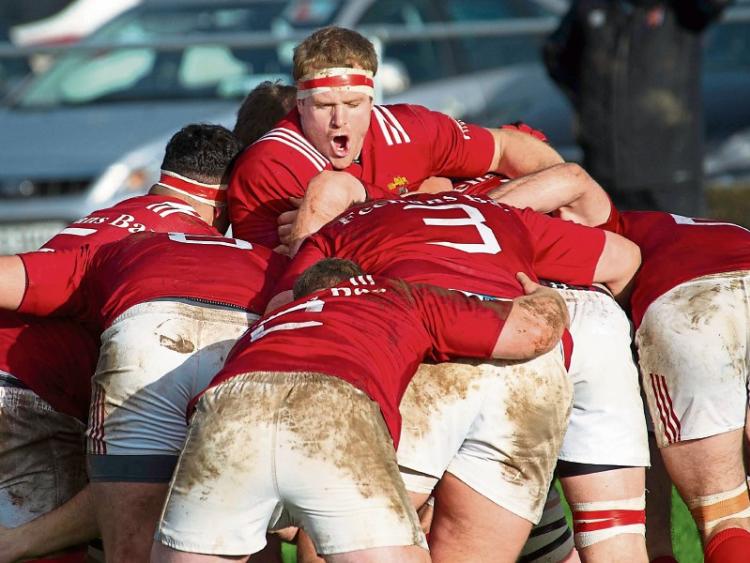 The Cashel forwards in action during a recent AIL game at Spafield against Queens University of Belfast.

In the opening half scores and indeed scoring opportunities were few and far between and the sides were deadlocked after thirty minutes with the only opportunity falling to UL/Bohs on 22 minutes when they missed a penalty kick from the ten metre line. Then the breakthrough came. Cashel's Paul Hayes broke from the back of the scrum and from there backs and forwards went through the phases. Eamon Connolly made a break from the 22 and brought play inside the five metre line, scrum half Kevin O'Connor threw a 20 metre  pass like a bullet to Aidan O'Connor on the wing and he made no mistake to score a try in the corner to put Cashel five points ahead.

There was no further score in the first half and Cashel led at half time 5-0.

The second half was no less competitive with both sides running at every opportunity.  The second score of the game was going to be vital and it came on the 63rd minute. A wonderful passing movement brought play to the UL/Bohs five metre line. The ball was knocked on resulting in a scrum for the defence. They picked and headed for the 22. The ball carrier knocked on in the tackle, the ball broke to John Ed O’Connor and he raced under the posts for that vital second score. Eamonn Connolly converted.

This score gave Cashel some breathing space but UL/Bohs never gave up and attacked again. Another sweeping backs movement brought Cashel into the danger zone again but they failed to score. Back came UL/Bohs with time almost up only to be stopped near the line by a brave tackle by Cashel's winger Paul Perrin. Conor Cashman put in a similar tackle as the final whistle blew. Final score Cashel 12 UL/Bohemians 0.

It was a good tough cup game played in an excellent spirit. Cashel will play Richmond in the next round away in Limerick   in the round of 16.