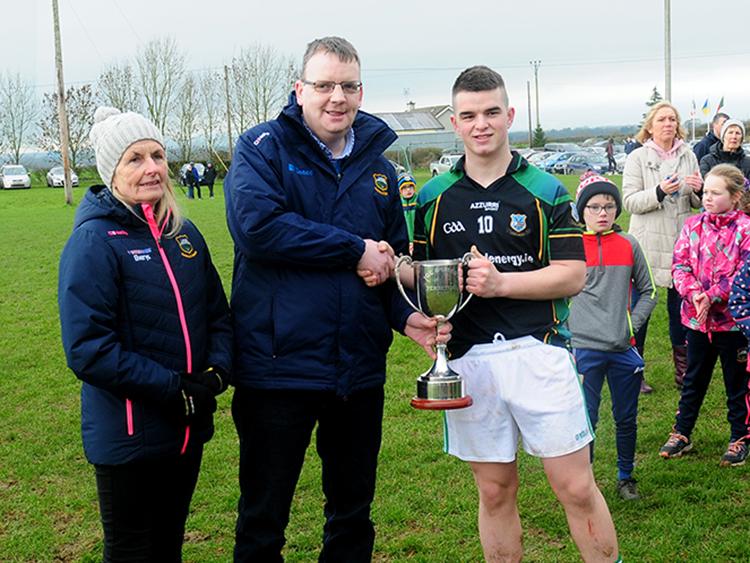 Moyne-Templetuohy-Thurles Gaels narrowly edged the final of the Darmody Sports Turf Mid Tipperary Under-21B Football Championship on Sunday morning at Castleiney when they beat Drom & Inch by two points in a well-contested affair.

Despite falling 0-1 to 0-4 behind inside the opening fifteen minutes Drom & Inch did well to take the lead (1-3 to 0-4) seven minutes into the second half thanks to a John Campion goal. That three-pointer, however, inspired Moyne Gaels to lift their level of performance a gear or three and they proved themselves the more accomplished side thereafter with an opportunist goal from an alert Philip Ryan propelling the side managed by Enda Everard and Diarmuid Fogarty toward a coveted Mid title.

For Drom & Inch Stevie Nolan, Paudie Kinane and John Ryan were most prominent while Conor Bowe, Jack Taylor, Gearóid O’Connor and Chris Munroe were outstanding for Moyne-Templetuohy-Thurles Gaels. Please note though the work rate of Moyne Gaels’ Ben Ryan was absolutely outstanding. Ryan was named at corner-forward, but covered every inch of the field at Castleiney in a relentless display of raw grit.

A smashing left-footed point from Paudie Kinane presented Drom & Inch with an early lead, but Moyne Gaels responded through Philip Ryan, Conor Bowe (two frees) and Chris Munroe (with a cracker off his left) to take a 0-4 to 0-1 lead by the 15th minute.

Drom & Inch, however, had the better of the second quarter and thanks to efforts from Ben Stapleton and Paul Bergin Brian Boyle’s men trailed by just one at the break (0-3 to 0-4). Indeed, Drom & Inch led the shot count at the break 9-6 and were a real force in this contest.

Seven minutes into the second half Drom & Inch re-claimed the lead when John Campion stabbed home a goal from close range following a contentious line ball which was awarded against Moyne Gaels (1-3 to 0-4).

Moyne Gaels’ Conor Bowe converted a long-range free in the 42nd minute to close the gap to one. Then, five minutes later, Gearóid O’Connor led a Moyne Gaels counter-attack, played a one-two with Mark Ryan and booted over a terrific right-footed equaliser. And, the Gaels were far from finished: right from the re-start O’Connor claimed a mark and fed Conor Bowe; the centre-forward’s right-footed effort dropped short and in his efforts to palm the ball away to safety Drom & Inch ‘keeper Eoin Collins only managed to deflect it into the path of Philip Ryan who punched home from close range (1-6 to 1-3). Your heart absolutely went out to the misfortunate Collins who was doing his utmost on behalf of his team; conversely Philip Ryan could not believe his luck and gleefully celebrated the key score of the game.

There was still time, however, for Drom & Inch to rescue the situation and they hit back with two Paudie Kinane points - one was from a placed ball and the other a classy effort off the left following a smashing delivery from Ben Stapleton.

With a point in it Moyne Gaels required an insurance score and the Gaels manufactured same in the 58th minute when Chris Munroe set up Conor Bowe for a terrific score from play.