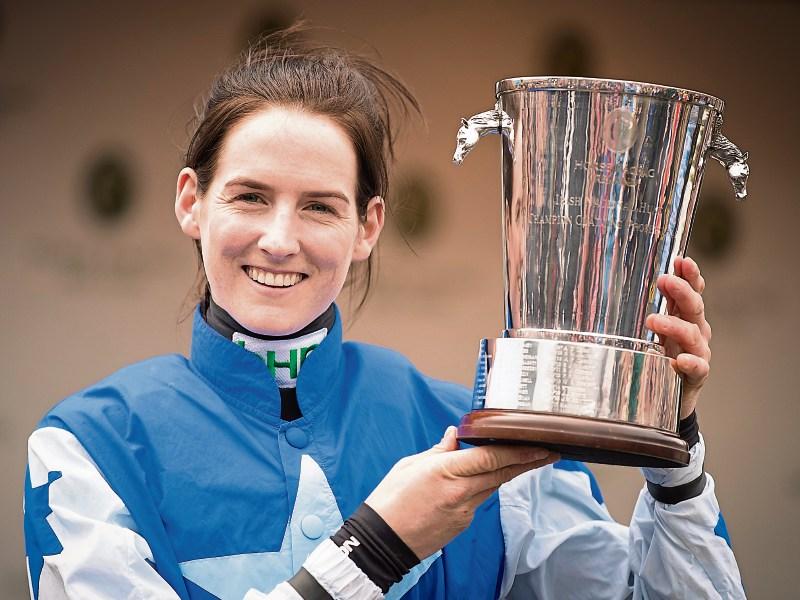 Killenaule's Rachael Blackmore steered A Plus Tard to victory in the Novice Handicap Chase at the Cheltenham festival today, Tuesday

Killenaule jockey Rachael Blackmore has ridden her first winner at the Cheltenham festival.

5/1 favourite A Plus Tard, trained by Henry de Bromhead in Co. Waterford, romped to victory in the Novice Handicap Chase today, Tuesday.

29 year-old Blackmore is currently locked in a battle with Paul Townend in the race to become this season’s Irish champion jump jockey.

The middle child of Charles and Eimir Blackmore, Killenaule, Rachael is a former pupil of Moyglass National School and Loreto Secondary School in Clonmel.

She originally opted for Science in UCD but switched courses to study Equine Science at University College Limerick.

Horses have always been part of her life, and growing up on her parents’ dairy farm there were always horses and ponies for her to ride.

She has enjoyed tremendous success since turning professional four years ago.

She rode 11 point-to-point winners and seven winners as an amateur rider before graduating to the professional ranks in March 2015.

She gained her first success when Most Honourable, trained by John ‘Shark’ Hanlon was a winner at Clonmel in September of the same year.

‘Shark’ Hanlon had also provided Rachael with her initial success as an amateur rider when Stowaway Pearl won at Thurles on February 10, 2011.

Not surprisingly, her ability hasn’t gone unnoticed and she won two awards towards the end of last year - the Irish Times Sportswoman of the Month award for October, followed by Horse Racing Ireland’s National Hunt Achievement Award.

With a first winner at Prestbury Park under her belt, she will be looking to add more winners to her tally in the remaining three days of the Cheltenham festival.