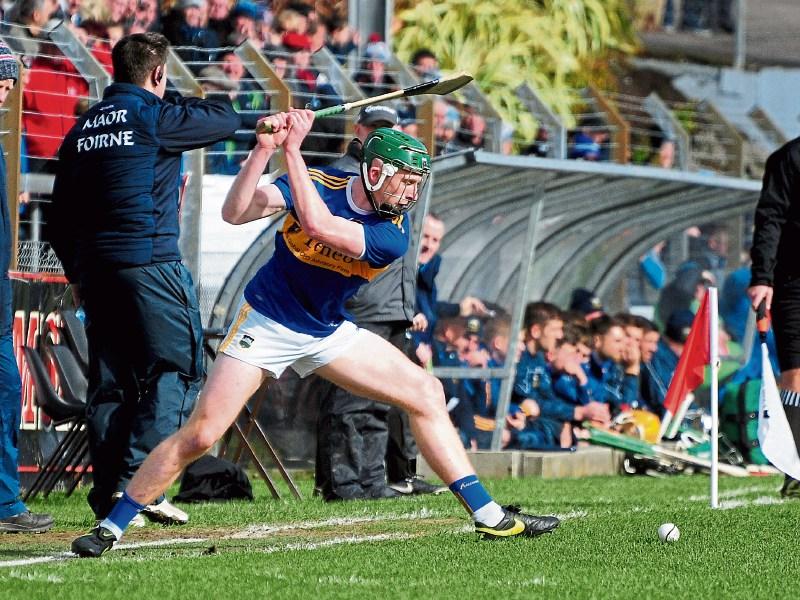 Poetry in motion: Robert Byrne cuts a line ball for Tipperary against Cork at Páirc Uí Rinn on Sunday last.

It looks like a very busy  bank holiday weekend ahead for sport with a world of hurling and football games down for decision, both at inter-county and on the   Tipperary’s club scene, not forgetting the traditional St. Patrick’s Day showpiece of the All-Ireland club finals from Croke Park on Sunday.

It is Saturday though that will concern Tipperary followers most of all, with both county hurlers  and county footballers in action in important league games.

The footballers will tackle  Kildare in Newbridge (2.30 pm) while Tipperary hurlers will entertain Dublin in a National League quarter-final game at Semple Stadium with throw-in at 4.30 pm.

As Tipp team manager Liam Sheedy put it after last Sunday’s victory over Cork - “it’s a nice place to be it’s another competitive match,” knowing full well that had Tipp not done the business in Ballintemple on Sunday they would have had to make do with challenge games and the likes between now and May 12.

Tipp’s performance on Sunday - their best so far in 2019 - should give them a confidence boost for the visit of the Metropolitans to Semple. A win here would set up another tilt at All-Ireland champions Limerick and the kind of engagement that Sheedy would like to have to help him towards finalising his starting fifteen for the summer.

“When you get to the end of the league you kind of get to the stage when you know 10 or 12 of your starting 15,” he commented on Sunday after his side’s 13-points win. There’s still a bit to go but Tipp suddenly now have competition for starting places and that’s no bad thing ahead of  a quarter-final.

Under new manager, Mattie Kenny, Dublin won four of their five encounters in Division 1B to take top spot. Of most significance were the results against Galway and Waterford; they beat the Deise by 1-26 to 4-15 in Parnell Park, and suffered their only defeat of the campaign to Galway in Salthill 0-20 to 1-11.

Twelve months ago Tipp and Dublin also met in a quarter-final in Croke Park when, in a very strange game, Tipp recovered from a worrying start to eventually ease home by 11 points. The slow and complacent start to that game wouldn’t want to be repeated this time round. Dublin will hope to put in a fully committed performance to gauge exactly where they are themselves in their progress towards the Leinster championship.

Tipp’s team won’t be announced until Friday night and it will be interesting to see what selection is put forward. After the win over Cork,  Liam Sheedy pointed out “I’ve got really good competition for places and next weekend is another opportunity to see some more.” Nothing brings on a team like success and hopefully the form of Sunday last can be maintained against Dublin on Saturday and beyond that again.

County U/21 (A) Football Championship Final

County U-21 B Football Final

The Bridge House West Tipp MFC B Group 1 Round 2

West Tipp MFC A Round 3

West Tipp MFC A Round 1