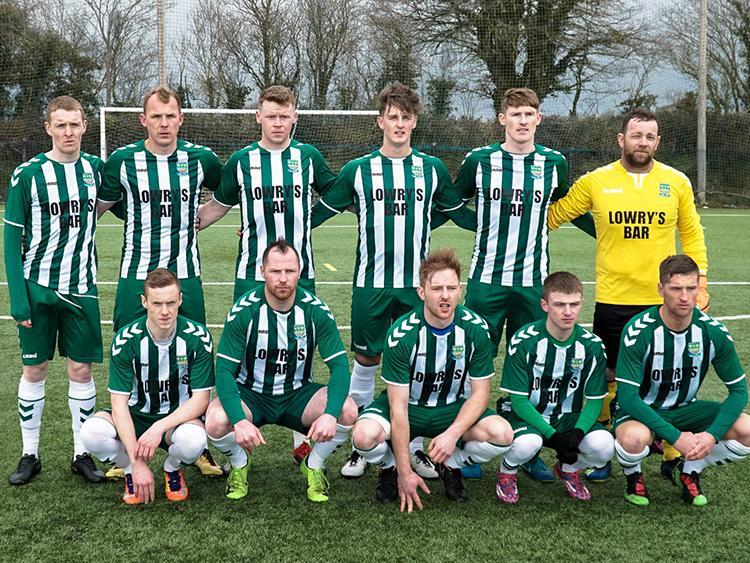 St Michael’s, thanks to goals from John Connery and Seán Guerins, beat Clonmel Celtic 2-0 on Sunday; that result, coupled with Peake Villa shipping a 0-2 defeat at the hands of Bansha Celtic, means that James Walsh’s men can now not be caught at the summit of the Tipperary South & District League Premier Division and are duly crowned league champions for the fourth successive year.

Prior to Sunday Peake Villa enjoyed a mathematical chance of catching the Saints, but the Thurles side lost to Bansha Celtic (0-2) on Sunday. As a result Peake Villa are thirteen points behind St Michael’s with only one game in hand. The Saints have three games remaining in their programme of games while Peake Villa have four.

The Saints have already completed the league double over Clonmel Celtic, Clonmel Town, Vee Rovers, Cahir Park and Old Bridge. St Michael's have also beaten Peake Villa and Tipperary Town while their only defeat of the season materialized away to Bansha Celtic. Therefore the Saints' title run-in comprises of a home game against Bansha Celtic, home to Tipperary Town and away to Peake Villa.

The Saints’ Tipperary Cup quarter-final victory over Bansha Celtic proved a sweet one for St Michael’s. Their only hic-cup this season occurred in the John Delaney Cup (a pre-season tournament). St Michael's beat Borroway Rovers (4-2) and Blackcastle Templemore Harps (2-0) before losing the final of that tournament to Bansha Celtic (1-3). And, Bansha Celtic also presented the Saints with their only league defeat this season.

In the first round of the Tipperary Cup St Michael's saw off the challenge of Cashel Town B (5-0) before accounting for Peake Villa (4-1) in the second. But in the recent Tipperary Cup quarter-final Bansha Celtic managed to trouble St Michael’s once more. The contest finished nil-all before the Saints won a sudden death penalty shoot-out 4-3 with Richie Ryan, John O’Brien, Jimmy Carr and Christopher Higgins converting the spot kicks. The St Michael’s B team are also through to the semi-finals of the Tipperary Cup having seen off Glengoole United in the last eight (3-0) four thanks to goals from Danny O’Brien (two) and Collie O’Dwyer.

St Michael's have been draw to face Geraldines (Limerick District League) in the semi-finals on the Munster Junior Cup - Pike Rovers will take on Newmarket Celtic on the opposite side of the draw.