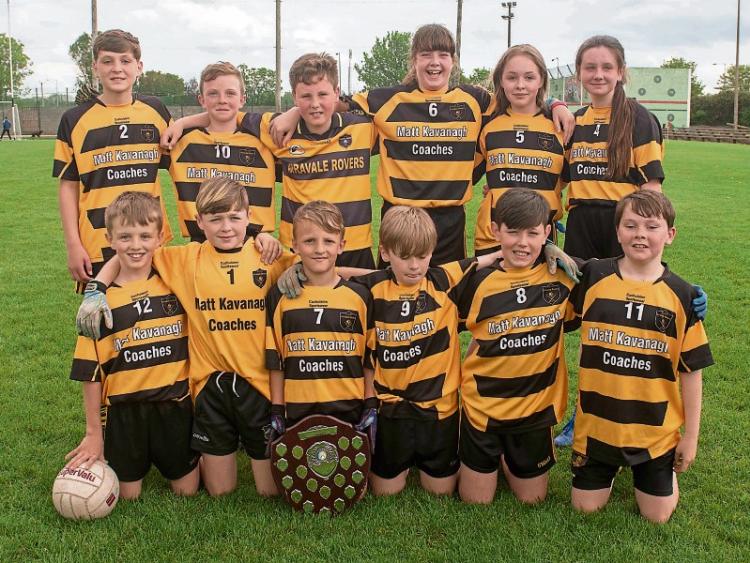 Marvel may have another addition to their franchise after Captain Cilvinas put on one of the performances of the day running the game and  scoring  for show. Arravale Rovers will have had to handle the excitement of having two teams in county finals. This can have an effect on players’ performance, not playing to their potential.

Any fears of that were quickly dispelled  by the second minute. Three attacks in succession yielded two scores.

From Cilvinas’s pass, Donnacha Quigley opened with a point before Jaye Cilvinas pointed. A rare Moycarkey Borris   attack resulted in a fourth minute wide. Cassie Cremins set up Ciaran Brogan to extend the lead. From that point on the movement, vision, passing and score taking was a joy to behold.

Jaye and Donnacha would assist or score 3.2 before the half-time whistle. Jaye hit 3.1, Declan Cotter setting up the point.

Jaye’s best, a brilliant 1-2 with Donnacha, saw his shot saved by Rueben Power before tapping home. Moycarkey finished on a good note with a well worked move finished off by the impressive Kate Dowling, 4.04 – 0.1.

Arravale Rovers backs were on form and kept on their toes by ‘keeper Adam Keogh, Tiernan Molloy Hickey, Sean Kinane and Cassie Cremins all had their hands full with Aoife Shelly to mark.

From the throw in Donnacha collected, going on to fire a point. Ciaran Brogan scored as good a point as his namesake would manage. It was all one way traffic, despite Conor Walsh’s and Doherty’s efforts. Arravale’s Hannah Mai Sheehan, Lily Maher and Keegan O’Neill let very little past midfield.

This gave the forwards plenty of possession, and they would have had more goals only for Rueben’s diving saves.

Captain Cilvinas and side kick Quigley would undo the defence to hit a further 3.1, Jaye finishing the moves.

There would be a fourth Arravale scorer when David Moloney pointed. Chairman Martin Bourke marvelled at the quality on display as he presented the trophy to captain Jaye Cilvinas.