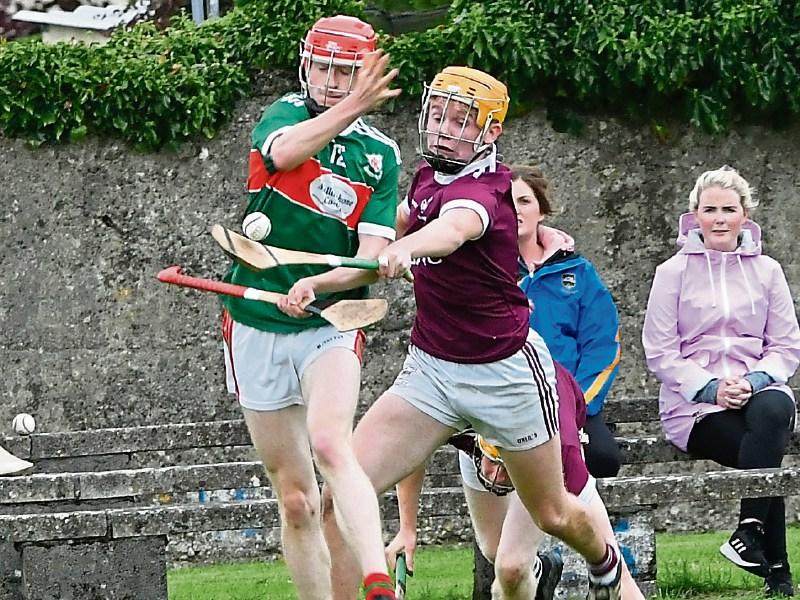 On the Wednesday before the All-Ireland final the two South Tipp Minor ‘A’ semi-finals both took place, with the closer of the two games  in Fethard between neighbours Ballingarry and Mullinahone.

While some would have made C.J.K.favourites, others going back over the underage results over the years would have given the nod to Ballingarry.

In the end, both sides were probably correct with Mullinahone desperately hanging on to a two point lead.  For most of the game Mullinahone were in the lead, but they couldn’t shake off the Ballingarry lads.

Last year in the South Tipp U16”B” final Ballingarry just edged out the Mullinahone lads and again this year there was little between the sides.   Both sides were young and Leaving Cert graduates were in short supply, which was a relief to both sets of mentors and supporters.

The game began with Luke Foran in charge of the whistle.  Eoin O’Dwyer pointed to give Mullinahone the lead.  Declan Hayes levelled from a free for Ballingarry.  Mikey O’Shea and Jack Lonergan gave C.J.K. a two point lead, but Declan Hayes brought the sides to parity.  Mikey O’Shea pointed a C.J.K. free, but Hayes again levelled.  C.J.K. missed some long distance frees, but Ballingarry were making good use of their chances.  Conor Whelan gave C.J.K. back the lead, but Hayes countered straight away.  Kieran Lyons gave Ballingarry the lead for the first time in 30 minutes, but a Mikey O’Shea free in added time sent the teams in level 0-6 each at half time.

Tit for tat scoring continued early in the second half from O’Shea (M) and Lyons (B).  On 48 minutes came what we thought was the breakthrough. O’Shea placed E. O’Dwyer for a first class goal.

Ballingarry levelled with two points and then took the lead with a 10th point.  O’Shea levelled for Mullinahone from a free having missed an earlier one.

Sixteen minutes were now gone. There was no score for the next 11 minutes.

Then came the decisive moment.  A penalty to C.J.K.  and Conor Whelan, up from the back line, smashed the ball to the net with goalie John Kennedy getting a touch.  The excitement wasn’t over.

On the stroke of full time a long distance free to Ballingarry was pointed by centre back Vaughan and the gap was only two points.  Ballingarry sought the winning goal, but the Mullinahone defence remained intact for the final four minutes.

Referee Foran sounded the final whistle to the delight and relief of Mullinahone.  They are now in their first Minor hurling ‘A

final in eight years.  In it they will meet Carrick Swan who blitzed St. Mary’s in the other semi-final.

Impressive for the Reds among those less mentioned were Shane Morris, Danny Dunne and Diarmuid White, while Ballingarry probably had the man of the match in centre back Conor Vaughan, aided by Kieran Lyons and sharp shooter Declan Hayes.