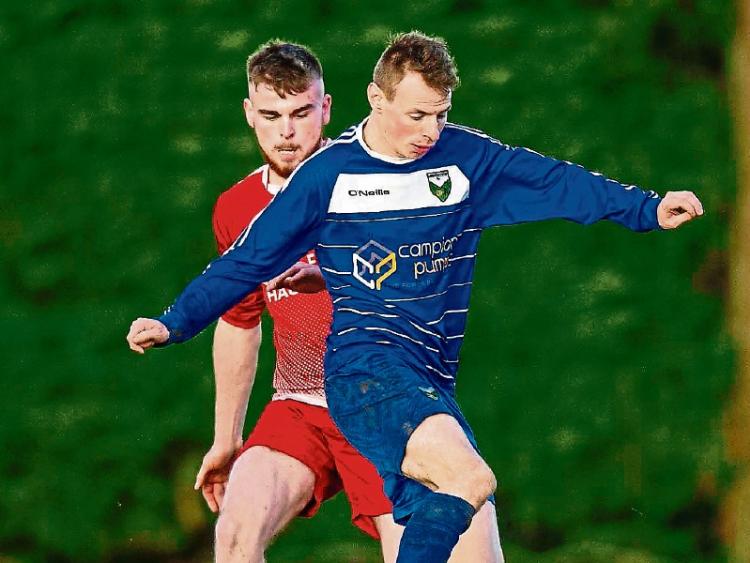 Daniel Rafter who bagged a brace for Glengoole United in their Clonmel Credit Union Opening Day win at Cahir Park.

Cahir Park welcomed newly promoted Glengoole United to Cahir for the opening game of the new season, hoping to build on a solid first season back in the Premier League last year, but ended up on the wrong end of the result when the away side put in a very good performance to take all three points from the game.

The home team started slowly but looked to have weathered the storm and created a couple of half chances that they were unable to convert. They were punished for this profligacy when they went a goal down two minutes before the break after a defensive error allowed Daniel Rafter to slip in behind the backline and fire to the net.

The second half once again saw the home team dominate as they went in search of an equaliser, but time and again they were repelled by a really good performance from the visitors.

And as in the first half they were caught again on the counter just before the hour mark when Rafter found more space in behind the defence and doubled his side’s lead with a second very well-taken effort.

This seemed to knock the stuffing out of the home side and they huffed and puffed for the rest of the game without ever really looking like they could get back into it.

In the end it was a very good performance from Glengoole who showed they will be a handful for most teams this season.

Two Mile Borris welcomed Premier League football back to Newhill Park on Sunday last with a comprehensive victory over Vee Rovers who will be hoping to consolidate their position in the league after staying up last season.

The home side were very well drilled from the start in this one and took only five minutes to open the scoring when Cian Hayes found Barry Ryan free and he slotted home from close range.

In the 15th minute Derek Loughnane thought he had doubled the lead, but his effort was saved by the visiting keeper. Alas for the net minder, Borris’ Michael Foley was on hand to follow up and he made no mistake from six yards out.

Cian Hayes was a thorn in the Vee defences side all game and he was brought down in the area just after the half hour mark to earn a penalty for his side that was dispatched to the net by Kieran Hayes, giving the home side a comfortable 3-0 lead at the break.

The visitors did try to get back into the game early in the second period and forced some good saves from the home keeper, before finally getting some reward 20 minutes from time when Anthony Crotty pulled a goal back.

It turned out to be no more than a consolation however as the home side had another penalty awarded nine minutes from time and Hayes did the business again, before Jamie Carey made it five with a minute left on the clock, giving his side a very good home win to get their season off to a flyer.

St Michael’s continued their winning start to the Premier League season in a game against near neighbours and rivals Bansha Celtic, but they had to wait until late in the game before they were able to secure the points.

This game was at times a dull and dour midfield battle with the visitors generally in the ascendency possession wise, but unable to make that count against a very solid defensive display from the home side.

In fact it looked like the game would peter out into a draw when with five minutes to go the deadlock was broken by a wonder strike from Joey Mulcahy.

A second sublime effort by Jimmy Carr a couple of minutes later ensured the three points for his side,.

St. Michael’s  will now have all eyes on next weekend’s game - the delayed FAI Junior Cup final - against Dublin side Sherriff United. This game   goes ahead at Deasy Park in Galway on Saturday next, August 31.