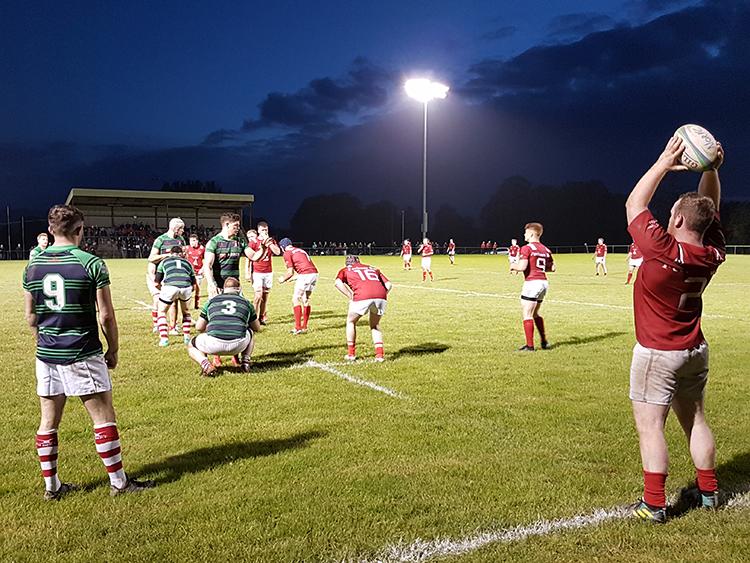 A composed Cashel RFC stormed back from fourteen points adrift to beat their Tipperary rivals Nenagh Ormond in the opening round of the prestigious Bank of Ireland Munster Senior Challenge Cup at New Ormond Park in Nenagh on Friday night. Cashel RFC trailed 3-17 early in the second half, but upped their performance a gear or three thereafter and plundered three tries to secure a famous win on Nenagh soil.

Ormond burst into life immediately after the break when Joshua Rowland countered brilliantly from deep inside his own half and set up John Healy for a try in the 41st minute (Conor O’Brien converted to give the home side the lead for the first time in this contest).

Then, just five minutes later, Nenagh Ormond scored once more. And, once more Rowland was central to an eye-catching attacking more; the full-back gathered a searching Clayton Stewart kick through and although Rowland was hauled down inside the Cashel RFC 22 a handful of phases later John O’Flaherty plunged over. Conor O’Brien added the extras and the home side led by fourteen (17-3).

Cashel RFC re-grouped and worked hard to gain a foothold in the contest, but were frustrated on two notable occasions when some disciplined Nenagh Ormond defence forced penalties for holding on; Nenagh did especially well, for instance, to deny Cashel a try in the 57th minute.

To their credit Cashel stuck at it and following some sustained pressure Josh Pickering opted to tap and go from a penalty and the scrum half was rewarded for such opportunism in the 64th minute when Richard Moran touched down (converted by Aiden McDonald).

The home side appeared to tire significantly during the concluding quarter of this contest and in the 77th minute Alan McMahon carved Nenagh open out wide and created the room for James Ryan to score the match-winning try.

Cashel RFC set the pace for the majority of the opening half, but a number of handling errors cost them dearly against a Nenagh Ormond side who defended even though Evan Murphy was sin-binned in the 15th minute - two minutes later Oisín Ó Suilleabháin (penalty) booted the visitors into a narrow lead.

In the 38th minute Conor O’Brien steered a Nenagh Ormond penalty wide, but the winger made no mistake from the tee four minutes later and the sides retired at the break with little to choose between them (3-3).

Three Tipperary rugby clubs are getting in gear to compete in the forthcoming 2019-20 Energia All-Ireland League - Cashel RFC and Nenagh Ormond will compete in division 2A of the competition while Clonmel are set to battle it out in division 2C.

Clonmel will host Omagh in their opening fixture on Saturday, October 5 while on the same day Cashel RFC are away to Dolphin (2.30pm) and Nenagh Ormond host Rainey OB (2.30pm).