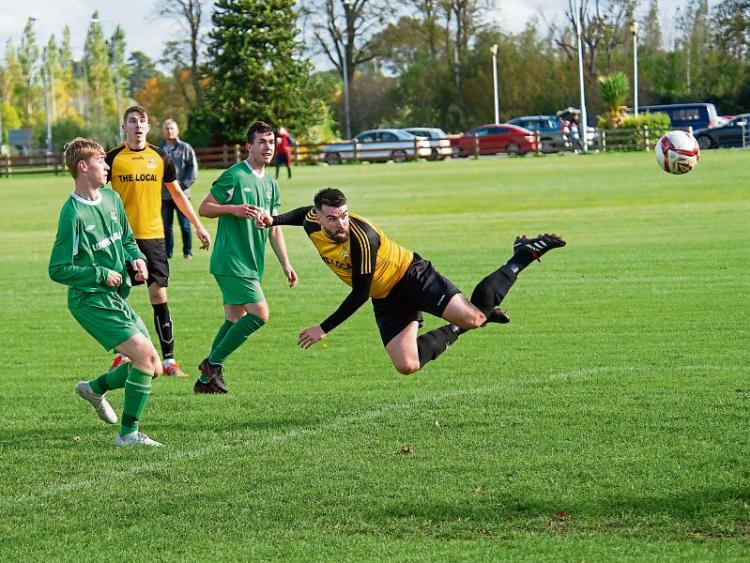 Cup holders St Michael’s did more than enough  to warrant  victory against a spirited Wilderness side who worked and defended well and brought a lot to the contest, before ultimately succumbing to a better side.

It  took the Saints until the 34th minute before the home side finally scored when a ball dropped kindly for Jimmy Carr  to score what was the opening half’s only goal.

The second half continued much in the same vein with Saints taking the game to the Clonmel visitors. Olly O’Driscoll was unlucky to see his shot in the 10th  minute  hit the underside of the bar and stay out. The home side finally doubled their lead four minutes after the hour mark when Shane Ryan turned in a John Connery cross from the left. And they made it 3-0 13 minutes from time when David Slattery converted a penalty after Colin Bargary had been fouled in the area. Seanie O’Hara again pulled a half chance wide on 78  minutes, before the home side wrapped up the scoring two minutes later when John Connery  converted a Russell Quirke cross from  wing.

Cashel Town went north to face NTDL side Nenagh Celtic and progressed to the next round with an excellent performance that lead to a comprehensive win against the North Tipperary side.

The visitors took an early lead after just five minutes when a brilliant shot from Sean Cormack hit the net from all of 20 yards out. Cashel only held this lead however until the 18th minute when the hosts equalised with a brilliant free kick from Symon Populae. The visitors re-took the lead ten minutes before the break when Eoin Byrne got on the end of a cross from Niall O’Brien to head home.

Nenagh did create chances in the second half but Gearoid Slattery was equal to everything and made one brilliant save just after the hour mark to keep his side in front.

Twenty minutes from the end the TSDL side made the victory safe when James Harding headed in another Niall O’Brien cross. After that Nenagh pressed forward but Cashel’s defence stood firm and ensured their side’s route to the next round.

Two late goals in Cahir broke North Tipperary hearts as Cahir Park put their poor league form behind them to book passage into the third round.

The visitors started well and showed no fear in taking the game to their hosts, opening them up at the back and taking the lead in only the fifth minute of the game. But that lead lasted only three minutes as the Park hit back with an Alan O’Donnell header to level matters. But that didn’t in any way change the Borris boy’s attitude and they continued taking the game to Cahir, before re-taking the lead in the 19th minute with a well taken effort by Robbie Donnelly.

After that the game turned in a tough midfield scrap with neither side making any real chances of note. And it took until five minutes from the end for the home side to get an equaliser when William O’Dwyer got behind the Borris defence to fire home from close in.

Shook by this, the visitors then saw things go from bad to worse two minutes later when John Ryan smashed a volley home from 20 yards to put his side in front for the first time and with it  a ticket or the next round.

There was only a single goal between these teams when they met recently in the Munster Junior Cup, and there was even less than that on Sunday, but they still managed to produce the most dramatic finish of the weekend with a penalty shootout that had the nails of both sides whittled down to the quick.

The teams were very evenly matched and were able to cancel each other out during normal time. Added time still couldn’t separate the teams, so the game went to spot kicks. And that went on, and on, and on, before eventually Christy English became the hero for Vee when he fired in the winning penalty that gave his side the victory.

TSDL Premier League leaders Two Mile Borris continued their fine form at the start of this season by advancing in the Junior Cup with a comprehensive win against North Tipperary side Moneygall on Sunday last.

The game was tight for the first half hour with neither side able to make the breakthrough, but that did eventually come ten minutes before the break when Jamie Carey finished off a pass from Richie McCarthy to open the scoring.

That was the only score of the half and the second period was just as tight before the home side equalised in the 60th minute. But Borris seem to be made of stern stuff this season and re-established the lead ten minutes later when Richard McCarthy turned scorer and finished off a flowing passing movement.

Ten minutes after that a Martin Darmody free kick doubled the advantage and the same player made the game safe only three minutes after that. A Jamie Carey penalty seven minutes from time put the gloss on a very good game by the South Tipperary side.

This was probably the most anticipated game of the round with the two TSDL Premier League sides butting heads, and by the end there seems to be more proof that Clonmel Town are beginning to come out of a bit of a lull from the past few years towards getting back to the team that was perennially involved in the latter stages of Ireland’s biggest football competitions.

Town started this game the better of the two teams and took the lead after thirteen minutes when Keith Browne headed home from a long throw into the box. The home side eventually got a foothold in the game after this but didn’t take their opportunities, and the visitors doubled their advantage on the stroke of half time when Evan Maguire capitalised on a defensive mistake.

Celtic kept plugging away, but were still too profligate in front of goal to really hurt their opponents and the tie was pretty much put to bed ten minutes into the second period when the visitors were awarded a penalty kick. Conor O’Sullivan’s initial effort was saved but he finished the rebound to put his side in complete control.

Bansha continued to push on as Town defended their lead and finally got a goal back when Seamus Kinane finished well at the back post after a quick free kick 15 minutes from the end. They never really looked like truly getting back into the tie however and when they missed a penalty kick in the final minute of the game it pretty much summed up their whole afternoon of playing well, but just not well enough to deserve anything more than they achieved.

Rearcross finished the weekend as the only NTDL side left in the FAI Junior Cup when a dominant second half performance took them past the TSDL’s Old Bridge at home on Sunday.

The home side took the lead after catching the visitors napping in only the fourth minute of the game, but the Bridge were back on terms after a Stephen Guiry goal seven minutes later.

And the South Tipp side looked to have guided themselves successfully to half time level, only to be undone with a minute left in the half, leaving Rearcross to head to the break leading  2-1.

But the second half was a complete one sided affair with the North Tipperary side extending their lead five minutes in and making it four goals to one two minutes before the hour mark. Two more goals inside the final 15 minutes made it a very easy win for Rearcross.

Cullen/Lattin welcomed Cloughjordan to Aisling Park Cullen in the second round of this years FAI Junior Cup and found themselves a goal down after twelve minutes when a well delivered Paul Lake free kick from the right hand side found the head of Ger O’Brien who headed home. Things got worse for the home side nine minutes later when they were reduced to ten men but they worked themselves back into the game and in the 28th minute Mikey Stokes and Ben Murphy combined to see the latter find the net with an excellent strike that levelled the game.

This was how the tie went to the break and the visitors were offered a gilt edge chance to go back in front ten minutes into the second half when they were awarded a penalty kick. However youth keeper Josh Maloney got down well to his right to produce a fine save.

They eventually did get a second three minutes after the hour mark when Evan Kennedy controlled well in the box and smashed the ball to the net.

On 69 minutes Cloughjordan should have increased their lead when a quick corner kick found the head Ger O’Brien but Maloney in the Cullen goals produced another fine save.

Eleven minutes from time the hosts were back level when a Stephen O Dwyer free kick from the left found John Bourke at the back post who headed across the box and Mike Kenny was on hand to head home.

Four minutes later the comeback was completed when a well delivered ball into the visitors area was controlled well by Stephen O’Dwyer who slammed home from close in. Cloughjordan themselves were reduced to ten mien in the final minutes and the home side held on for a deserved victory.