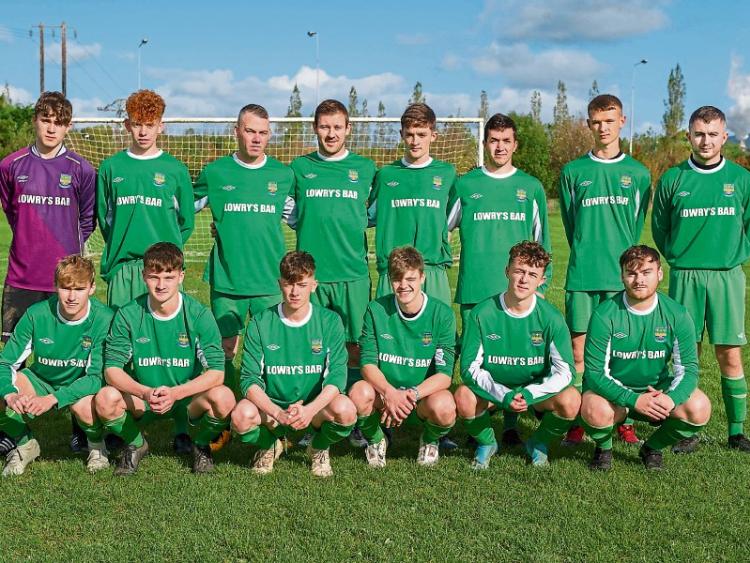 The St Michael's team who recently defeated Clonmel Town in a Division 1 game played at Ferrhouse.

St Michael’s returned to league action after a few weeks in different cup competitions and had to recover from the loss of two players early on before they overcame the team that had surpassed them at the head of the Premier League table in the meantime.  The home side dominated the play early on as Borris worked hard to stem the Saints attacks, and it took until the thirty first minute before the home side made the breakthrough when Jimmy Carr was upended by Gary Delaney and he duly converted the spot kick. Four minutes from the break however Adrian Walsh did well to save from Kieran Hennessey and in the follow up David Joyce was penalised for handball allowing Hennessey to level matters again from the spot.

This inspired Saints and they were back in front three minutes later when Shane Ryan rose well to head home a Russell Quirke free kick and send his side to the break leading by two goals to one. The home side came out fastest in the second period and stretched the lead to three goals to one within a minute when a deep Willie Armshaw cross saw Olly O'Driscoll head home from close range. Willie Armshaw was wide from a Russell Quirke cross on fifty eight minutes as the home side were completely rampant in the middle of the pitch and they finally extended the lead to four goals to one when Olly O'Driscoll scored from close range after Willie Armshaw pulled back a deep Russell Quirke cross.

Quirke on two occasions and Colin Bargary went close before Quirke made it five to one with two minutes left when he converted a rebound after Olly O'Driscoll had shot straight at Gary Delaney.

Bansha started this game well and were ahead after just two minutes when Daire Egan reacted quickest to score after springing the visitor’s offside trap.

They then had a gilt edged chance to extend their lead on ten minutes when they were awarded a penalty kick but were unable to convert from the spot. They finally added a second when Michael Fitzgerald finished well at the back post on the half hour, and it was three nil five minutes later when Darren McGrath hit the net from a tight angle.

Alan Hayes further extended the lead on the hour mark, and Tony Egan got on the score sheet from the spot on twenty minutes from time to make it six of the best. The young Vee side never gave up and scored twice from the spot through Shane Mc Grath before the end but the final say on the afternoon went to youth player Killian Fitzgerald added a seventh for the home side deep into time added on.

A Cahir Park collapse in the final seven minutes of what had up to then been a very even first half set the stage for an easy win for the Thurles side and left the home side rooted to the foot of the table and now seriously facing a relegation battle as the evenings close in for the Winter.

The game on Sunday was played on a perfect pitch with a crisp bite in the air and the visitors started excellently putting together a number of passing movements before Pippy Carroll was found alone in the area to smash the ball home.

The home side however responded almost immediately and were back level within five minutes when Alan O’Donnell found the net.

The next twenty minutes or so flew by as both sides competed well creating but not converting chances, before three goals in seven minute period from Carroll and an Eoin Quirke brace left the visitors go to the break in a four goal to one lead.

The second half then was pretty much all Peake Villa as they had the lead and the confidence to boss the game and they added three more goals with strikes from Ronan Maguire, Keith Cahill and a third from Carroll to finish out a hat-trick that leaves his side on the top of the Premier League with a 100% record so far.

It might have been a little early in the season to be calling this a relegation six pointer, but both sides were really in need of the three points on offer at Celtic Park on Sunday last. It was a tight affair for the first twenty minutes before Celtic hit the front after Paul Kennedy finished well at the back post from a corner kick.

Five minutes later however Glengoole equalised from a deflected long range effort by Shane Hanrahan, and shortly after that they hit the front after they got a penalty for a push in the box and the spot kick was finished well by Stephen Holohan.

Just before half time the visitors got a third when Keith Hanrahan hit a stunning strike from twenty five yards into the top corner. After the break Celtic made a few changes that saw them take the game to Glengoole and ten minutes into the second period Dylan Bates fired a low cross into the box for Paul Kennedy to finish.

Despite Clonmel Celtic having much of the ball for the second half they couldn’t find a breakthrough leaving themselves rooted to the bottom of the league for another week. They will need to stop this rot and soon.