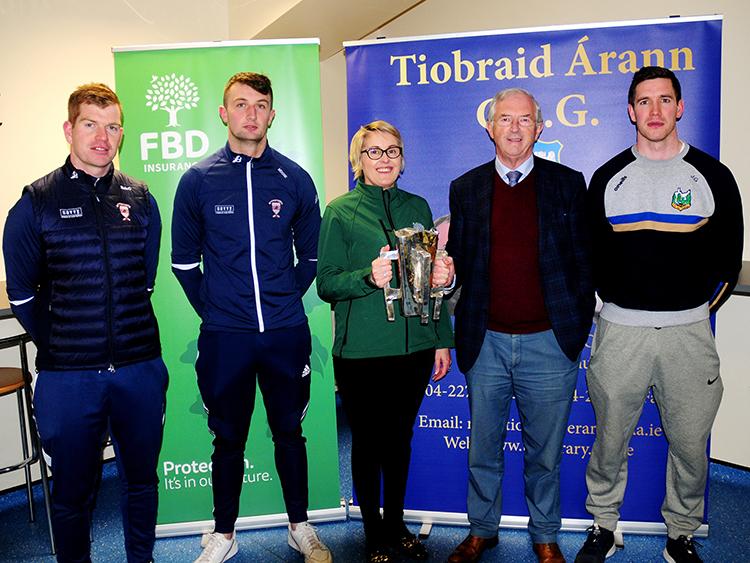 Will favourites Kiladangan, wonders Noel Dundon, be able to wriggle free of the vice-like grip which Borris-Ileigh are likely to exert on the FBD Insurance County Senior Hurling Championship decider at Semple Stadium, Thurles?

Three weeks ago, the Dan Breen Cup was up for grabs for anyone to claim. But the cream has risen to the top and it's up to Kiladangan and Borris-Ileigh to fight it out.

This is a novel final and trying to ascertain a favourite is very difficult - perhaps Kiladangan get the nod slightly on the basis of their unbeaten run this season, but Borris-Ileigh have reserved their best form for the closing stages.

It was interesting to hear both camps suggest that they made a pact at the start of the year to get back to the county final - is that not the ambition of all clubs when they return to training after Christmas? Of course it is, but when you have clubs of the pedigree of Kiladangan and Borris-Ileigh, that ambition is backed up by potential. And, they both still carried the anguish in their hearts of losing recent finals to Thurles Sarsfields in such poor fashion - they both failed to turn up, let the occasion get to them and the games were over before the knew it.

So, having a real go this season has brought them all the way to the final - especially Kiladangan who also won the North final against Sunday's opponents.

Both sides topped their groups in the county championship round robin series and were qualifed for the county quarter-finals before they squared off in the North final - it wasn't do or die in other words.

Trying to slip a sliver of daylight between them on Sunday is just so hard and the fact that both have renowned Portumna coaches on the sidelines adds to the intrigue. Seán Treacy (Kiladangan) and Johnny Kelly (Borris-Ileigh) are life-long friends and live just half a mile from each other in Boulea, Portumna. Their coaching philosophies are similar; they have talked hurling to each other for decades; and they have both enjoyed tremendous success. Now though, their paths converge on the sideline at Semple Stadium and they will be pitting their wits against each other.

Kiladangan have had people speaking very highly about them from the outset and it's no wonder when one considers the quality of the players at their disposal. From goalkeeper Barry Hogan, right down to corner -forward Billy Seymour, they have quality. Add in Alan Flynn, Johnny Horan, Willie Connors, the Gallaghers, Paul Flynn and David Sweeney and this is a very potent side indeed.

And, were they to win on Sunday this side could do very well in the Munster club championship and could be about for some time to come. But their focus will be solely on Sunday and getting across the line with their noses in front - one point will do them when the final whistle sounds.

But, keeping one point ahead of Borris-Ileigh is some challenge. Granted they have the youthful attacking duo of James Devaney and Kevin Maher, but, by-an-large, this is a well-settled Borris' team and they won't be fazed by the big day.

Last year was a write-off for them as injuries crippled their campaign, but they have a spring in their step this time round with Brendan Maher, Dan McCormack, Conor Kenny and Paddy Stapleton hurling up a storm. Then, add in the contributions of the McCormacks, Seamus Burke, Jerry Kelly, Tommy Ryan, Niall Kenny, Kieran Maher and Liam Ryan and Borris -Ileigh look a serious outfit; they are playing to a system which makes them very hard to beat.

Their semi-final win over Kilruane was an interesting spectacle. Patrons described it as being a very poor game, but drill down deeper into the match and you see how Borris' strangled Kilruane and didn't let them hurl.

They didn't want an open match and they had the wherewithall, the belief and the confidence to ensure that it was not open. If they adopt the same policy on Sunday we might not have a classic final, but will they care if they win? Certainly not.

So, the big question is: will Kiladangan be able to wriggle free of that vice-like grip which Borris-Ileigh will undoubtedly exert on them? If they do and the channels open it's Kiladangan's title. If not, the Dan Breen Cup will have a much shorter journey home for the coming year.