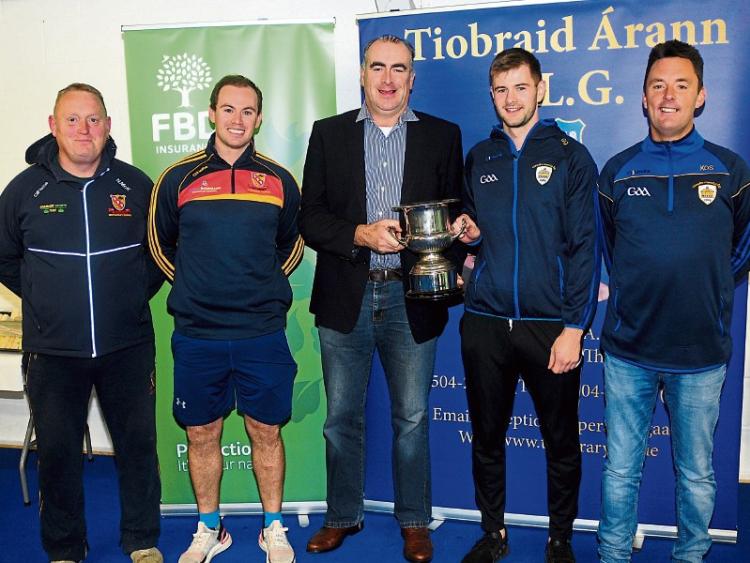 Above - Noel McKelvey and Rory Ryan of Moycarkey/Borris with Graham Quinn and Colm Purcell of Clonmel Óg, pictured with FBD Insurance branch manager, Clonmel, Willie Phelan, at the press launch for the FBD Insurance County Intermediate Football Championship Final, which takes place at Leahy Park, Cashel at 2.30 on Sunday

Sunday’s County Intermediate Football Championship Final against Moycarkey/Borris will be tinged with emotion for Clonmel Og.

The players who will take to the field at Leahy Park, Cashel, as well as their mentors and supporters, will represent a club still coming to terms with the loss of one of their players, 19 year-old Jack Downey, who died in August.

“Every day we go out we think about Jack.

“Jack will be with us, I’m sure, the day of the final. The Downey family are big supporters of Clonmel Og and big friends of Clonmel Og.

“Please God we’ll do Jack’s memory and Jack’s name justice on the day of the final”.

Colm Purcell says that another player is battling serious illness at present.

“In fairness to him he’s been at every training session since becoming ill. When he’s able to train he trains.

“He was on the sideline yesterday with us (at the county semi-final) and in the dressing room beforehand.

“He is an inspiration to the boys as well when they go out.

“We’ve a lot of that stored away for the final and please God it’ll bring the best out of us on the day”.

Clonmel Og qualified for the final courtesy of their defeat of local rivals Clonmel Commercials in the semi-final.

“It was a typical local derby game, both teams had an awful lot to lose in the semi-final and I’m just glad we got over the line to get into the final”, says the manager.

“I wouldn’t say our win over Commercials was unexpected. It’s a cliche but we knew it was a 50-50 game going into it.

“We were confident enough ourselves that if we stuck to the plan, stuck to what we talked about all year that we’d have enough in the tank to win.

“There were two points in it, we were under the cosh there at the end but I thought the boys dug in when we had to.

“We got a good goal in the second half (from Aaron Arrigan) and we were playing against the wind, and we saw it out in the end.

“So it’s onwards and upwards for us”.

Not surprisingly, Clonmel Og are expecting another battle in the final.

“Moycarkey have only recently come down from senior football”, says Colm Purcell.

“They’re a senior hurling club, they’ll have ambitions I’m sure to go back up into  senior football as well.

“You get to a final and any game is going to be hard. Whoever we were going to meet we knew it was going to be a tough game, but we’ll be ready, we’ll be confident and we’ll give it our best”.

Clonmel Og will face a Moycarkey/Borris team that defeated Golden/Kilfeacle, last year’s beaten finalists, by 2-6 to 0-8 in the semi-final.

While Rhys Shelly did the lion’s share of the scoring, the contributions of Rory Ryan, Conor Hayes, Eoghan Hayes, Chris McCullagh and goalie Paul Dempsey were also important for a Moycarkey team that took some time to get into its stride.