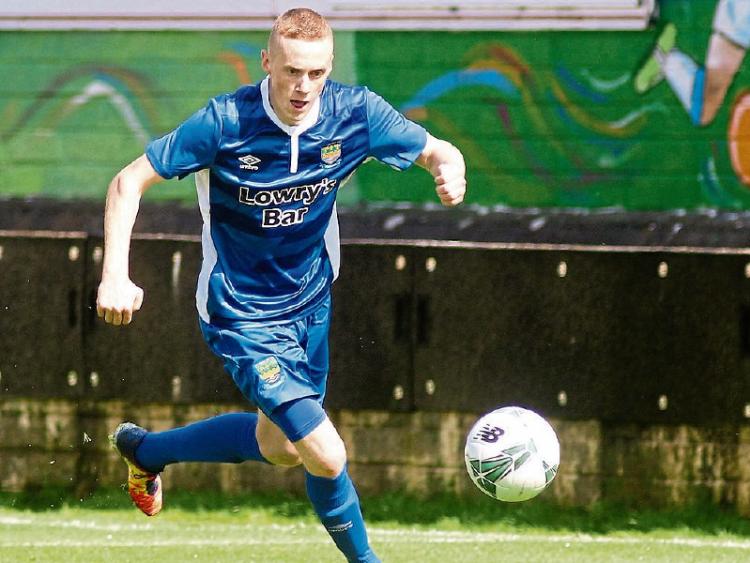 Jimmy Carr who scored St Michael's second goal in their 2-1 away win at Clonmel Town on Sunday last,

This was a hugely anticipated game in the FAI Junior Cup on Sunday last and by the end of the afternoon, the holders St Michael’s were still standing while the TSDL’s only other winners will have to wait another season before contemplating adding to their single win in the past.

The visitors applied some real early pressure and were rewarded taking the lead in the eighth minute through Darren Joyce who finished off a well worked move through the home midfield.

The hosts started the second half brightly and showed some good signs of getting back into the game, before their good work was undone when they conceded a goal by Jimmy Carr from some sloppy play which made a comeback even more difficult.

To their credit Town dug in and created chances but again failed to create the opening as Keith Browne, Evan McGuire and Keith Guiry all going close.

They finally got the goal their work deserved through Craig Guiry following great play from Conor O’Sullivan with 16 minutes remaining. But despite pushing on and dominating the last quarter of an hour, the hosts were thwarted by a rock solid Saints defensive line, and the game finished with a 2-1 win for the visitors.

Cashel Town have been on a fantastic run of form at the beginning of this season and they added to that by qualifying out of the FAI local section into the Open Draw for the first time in a number of seasons with a comprehensive win over a shell-shocked Cullen Lattin side at Palmershill on Sunday last.

The home side were on their game right from the beginning and took the lead after four minutes when James Harding netted from close range. Harding doubled his tally three minutes later when a long ball from goalkeeper Gearoid Slattery was missed by the defence and was finished by the sharp as a tack striker.

Eoin Byrne then got the first of what turned into a hat-trick when he fired home from close range in the ninth minute, before Sean Cormack got the goal of the game minutes later with a 25 yard effort yard as the home side ran riot.

Byrnes got his second and Town’s fifth with a tap-in after a fumble by the visiting before Cormack also got his second with a close range header to put the hosts 5-0 up inside the first 20 minutes of the game.

Byrnes completed his-hat trick and Niall O’Brien got a seventh before Cullen pulled one back ten minutes before the break through a Dubhan O’Grady strike.

The second period wasn’t as entertaining as the first with the home side adding a brace of goals scored by Mickey Coleman and a further O’Brien goal from close range in the last minute to wrap up an easy win and perhaps give the home side something to dream about as this competition really gets going now that its moved onto the national stage.

Clogheen side Vee Rovers upset the formbook on Sunday last when they advanced to the Open Draw in the FAI Junior Cup after a hard-fought win over fellow Premier League side Two Mile Borris.

The visitors were strong in the early part of the game but all their attacks seem to founder on the rock that was Cormac Flynn in the Rovers goal. And eventually the home side made Borris pay for their profligacy when in the 19th minute a quick breakway up the pitch saw the ball eventually fall to Christy English who made no mistake from just inside the box.

The same player almost made it two shortly afterwards when he cannoned a shot off the crossbar, but for the rest of the half it was again the visitors dominating the play without getting anything for their efforts.

The second half saw Rovers come more into the game as the away team got frustrated with their lack of end product and the hosts capitalised when they added a second 12 minutes into the half with Kieran Macken heading home a corner kick.

This left the home side in a very strong position and they controlled the game easily enough until Borris finally pulled a goal back in the final minute of the game.

It wasn’t enough to change the result however and Vee will again be a very sticky prospect for many teams, especially if they get a home draw in Clogheen.

The NTDL interest in this year’s FAI Junior Cup ended on Saturday night under lights when South Tipperary side Cahir Park travelled North to win on a comprehensive scoreline.

The Park got off to the best possible start taking the lead inside the first minute when Rhys Byron finished from close range, and they continued to play all the football before doubling their lead on ten minutes when Shane Murphy fired home from 20 yards out.

Kenny Cunningham made it three after 13 minutes putting the South Tipperary  side in complete control, but Rearcross managed to pull a goal back on the half hour mark to put the tie back into the boiling pot.

However the second period continued in the same vein as the first with the visitors dominating and they added a fourth on the hour mark through Shane Murphy to restore their three goal lead.

Byron got his second goal 20 minutes from the end to make it 5-1 and an Alan O’Donnell brace in the final ten minutes ensured that there would be no comeback for the hosts.

The home team did get a second goal in the final minute, which they probably deserved for their hard work and endeavour, but overall this was very much Cahir Park’s game and they will hope that this result will help kick start what has so far been a very stuttering league campaign.