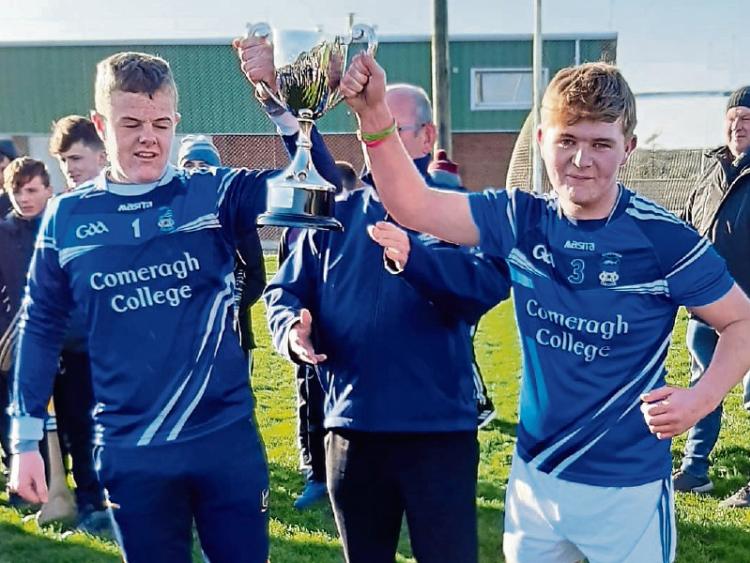 There were jubilant scenes among the Carrick-on-Suir players when the final whistle blew with Comeragh College clocking up a score of 5-9 to Carrigtwohill's 1-7.

The game began at a frantic pace with Carrigtwohill putting great pressure on Comeragh College's defenders and scoring the opening two points.

Taylor Fleming scored a nice point from a counter-attack and after 10 minutes the score was 3 points to 1 to Carrigtwohill.

An unfortunate injury to the Carrigtwohill No. 6 player led to a break in play and all at Comeragh College wish this fine young hurler the very best in his recovery.

Following the resumption of play, Comeragh College's Charlie O'Sullivan won a dirty ball before bursting through and burying it in the top corner of the net.

From the puck-out, Carrigtwohill owned possession and worked the ball in smartly and scored a goal bringing the score to: 1-3 to 1-1. Comeragh College, however, went on the attack and Dale Waters and Taylor Fleming scored two fine points.

Moments later Jack Hickey won a ball and played a fine pass to Pauric Walsh, who scored a goal. This was followed by the score of the game – a defence splitting solo run and accurate finish to the goal from Taylor Fleming.

Pauric Walsh got his second score of the game, a fine point from a central position. It was followed by a Charlie O'Sullivan point. Carrigtwohill got the final score of the first half leaving it 3-6 to 1-4 to Comeragh College at half time. The score was a combination of clinical finishing from the scorers but also some incredibly hard work from Nathan Booth, Fionn Barry and Callum Walsh.

The second half began with a lot of dirty ball being contested in the middle of the field. Comeragh College showed great discipline and spirit while contesting these balls. A fine delivery into Charlie O'Sullivan from a Taylor Fleming free led to Charlie’s second goal of the game, which was followed by Pauric Walsh’s second point. It was now Jack Hickey's turn to get on the scoreboard with 3 scores in a row, 2 points followed by a goal.

Charlie O'Sullivan followed with a point from play which was to be the last score of the game. It was now Comeragh College's turn to defend, with the full-back line of Jack O’Neill, Gavin O’Keeffe and Kyle Cooke and goalkeeper Adam Kerwick coming out and clearing ball after ball. The team's half back line of Reece Halligan, Conor Corcoran and Tadgh Leane also stood firm against every challenge Carrigtwohill threw at them.

The team's management said the win was no more than the players deserved for their application, honesty and discipline all year.

Comeragh College principal Kevin Langton congratulated the team and its management on their huge success and paid tribute to their hard work and commitment over the past season.