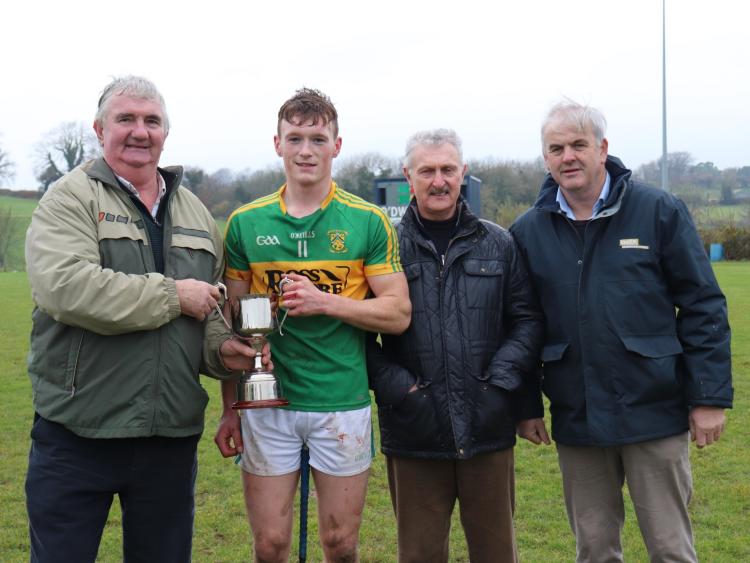 Clonoulty-Rossmore though had to dig deep and needed a strong second half comeback led by inspirational captain Dillon Quirke to hold onto the Tony Brennan Cup.

For thirty minutes of this exciting contest Cashel King Cormacs were well in control and it looked as if their long wait since 1992 to win a West under-21A hurling title would finally come to an end. Even in the second half when Clonoulty-Rossmore were on top Cashel King Cormacs were still in with a fighting chance and it took Cathal Bourke’s second goal to finally put daylight between the sides as Clonoulty-Rossmore out-scored their opponents 1-6 to 0-1 during the final ten minutes to seal a third title in-a-row for the defending county champions.

The opening thirty minutes was a fairly close affair though and Ross Bonnar’s goal in the twelfth minute proved to be the difference for most of the half.

Tom Clarke pointed to push Cashel King Cormacs ahead in the opening minute of the game, but that effort was quickly cancelled out by a pointed free from Cathal Bourke. Sean Ryan quickly added Clonoutly-Rossmore’s first score from play.

Cashel though were coming more into the game and Eoghan Connolly tied up the game. Aaron Moloney edged Cashel King Cormacs ahead as Clonoulty-Rossmore struggled in front of the posts before Cathal Bourke levelled the game for the third time in the eleventh minute.

Cashel’s inside forward line were causing problems for the Clonoulty-Rossmore full-back line and threatened goal on a number of occasions during the first half. Any time the ball was delivered in low to them they caused problems. Jack McGrath beat his man on the stand side to get in on goal only to strike across the face of goal and wide. Minutes later at the opposite side Ross Bonnar got in to raise a green flag.

A more physical Cashel continued to cause problems when hunting in packs and turning over possession.

Conn Bonnar and Dillon Quirke swapped pointed frees before Eoghan Connolly and Conn Bonnar (free) pointed before the interval. Cashel King Cormacs were ahead at the break 1-10 to 0-8.

The second half was a different game with Clonoulty-Rossmore dictating terms. They limited space to the Cashel fowards and were led by captain Dillon Quirke who was to the fore in the attack.

Cathal Bourke cut the deficit in the third minute of the half with a pointed free though it then looked as if their first half accuracy problems remained with more missed chances. When Dillon Quirke was fouled in the fifth minute Clonoulty-Rossmore were awarded a penalty, but Cathal Bourke’s effort was wide of the target.

It was a tough battle and scores were at a premium.

Clonoulty-Rossmore added two points from Donnacha Quirke and Jack Ryan between the eight and sixteenth minutes to leave two points between the sides.

Tom Clarke eventually ended Cashel’s drought with a well-taken score in the 21st minute. It was quickly followed by a Conn Bonnar free that tied up the game.

Cathal Bourke restored Clonoulty-Rossmore’s lead with another pointed free before the same player added goal number two. Dillon Quirke pointed another free, but Conn Bonnar kept Cashel hopes alive with one of his own.

Clonoulty-Rossmore though pressed on and two Cathal Bourke points followed by one from Nathan Slattery had them seven to the good. Nicky Kearns was called into action late on when he saved well from an Eoghan Connolly 21-yard free. Cathal Bourke added the final gloss to the win when he pointed a free.

Best for Clonoulty-Rossmore were Jack Ryan Casey and Jimmy Ryan in defence. Donnacha Quirke and Martin Ryan got more of a hold on midfield in the second half. Dillon Quirke led by example and helped take the game to Cashel King Cormacs in the second half. His ability in the air saw him win plenty of possession while he also landed some long-range frees. Cathal Bourke got more space in the second half and his two goals were key.

Cashel King Cormacs were best served by Tom Clarke who finished with 0-2 and Conor O’Dwyer in defence. Paddy Fahy was solid in midfield. Eoghan Connolly work tirelessly while the two Bonnars were always a threat especially in the first half.