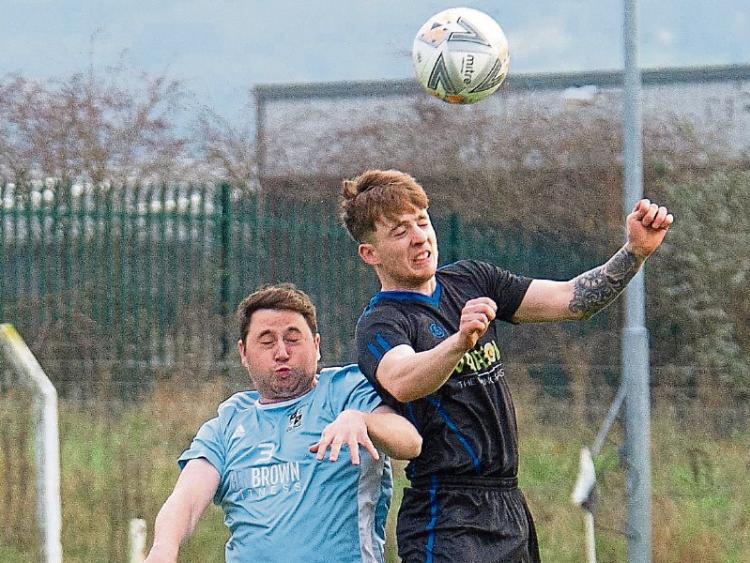 Jamie Malone (Tipperary Town) gets above Brendan Dempsey (Wilderness Rovers) in Sunday's Tipperary Cup first round game played at Clonmel which the visitors won by 1-0.

This was always expected to be a close game between these two First Division sides and so it proved correct with only one goal separating the teams at the end.

The home side are flying in the league and started well, being unlucky not to have hit the front in the 10th minute when a shot cannoned back off the crossbar. For much of the rest of the half the hosts pinned their visitors back into their own half and again saw a shot hit the woodwork shortly before the break.

The teams went to that break scoreless but Tipperary Town did come more into the game in the second half. Both sides had half chances and it looked like the game was heading for extra time when the visitors caught the Wilderness defence napping and Mark Roche got the all-important goal that decided the game.

After their recent Shield loss the Saints invited Peake Villa down to Danny O’Dwyer Park on Sunday with giant killing on their minds, but the Thurles side were adamant in ensuring they would not be caught cold with a very professional performance that continued their unbeaten run in domestic football this season.

It took 15St  minutes for the visitors to get their names onto the scoresheet but that in itself was a testament to the St Nicholas’s goalkeeper Mark Lowry who had a fantastic day between the sticks for his side. The former FAI Cup winning keeper made numerous excellent saves before even he couldn’t keep out Eoin O’Dwyer’s brilliant strike.

And O’Dwyer turned provider ten minutes later when his cross planted right on the head of ace striker Pippy Carroll to nod home from close range and double his side’s advantage.

There were no more goals for the next half hour or so as the Third Division side matched their illustrious Premier League opponents, but over that time fatigue and pressure eventually told and Mick Ryan added the vital third goal for the Villa to break the home side’s resistance on the hour mark.

Two more goals from Carroll, the second from the penalty spot, inside three minutes put a gloss on the scoreline that the home side scarcely deserved but in the end it was a comfortable enough win for the Thurles visitors. 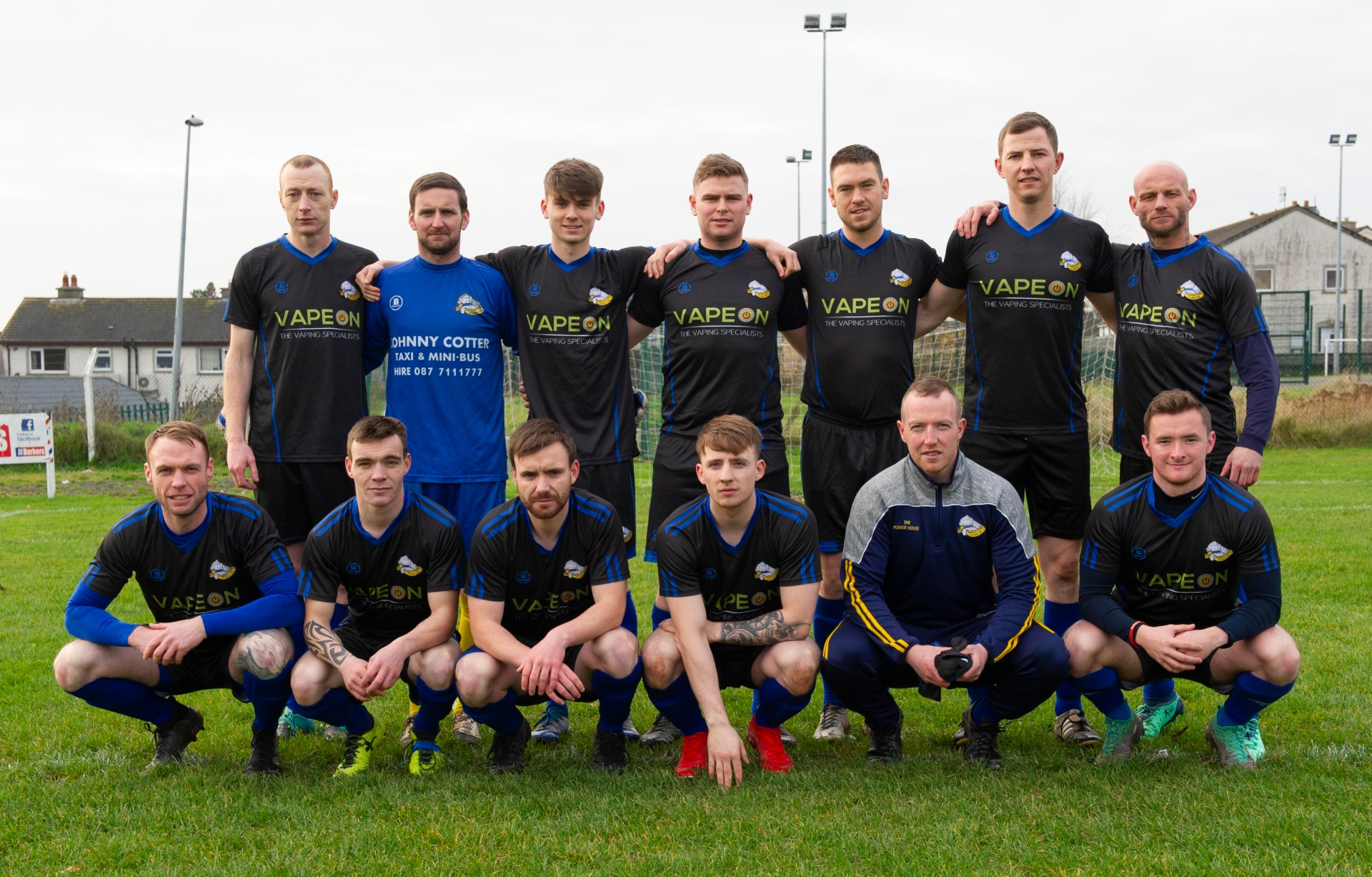 Neither of these sides have been lighting up their respective divisions but both are capable of giving any opponents a tough time on a given day, and that was what contributed to this low scoring but tough and dour cup tie on Sunday last.

The home side started the better and had a few good chances to open the scoring in the early part of the game, but only took the lead ten minutes before the break when Michael Roche was the beneficiary of a really good ball into the visitor’s area that he was able to slot home from six yards out.

Rosegreen took that lead to the break but the second half saw Killenaule take the whip hand in the game and push the home side back towards their own goal time and again. However possession and territorial control doesn’t win games, goals do, and Rosegreen made sure that they progressed on the basis of an excellent defensive performance that snuffed out any chances that the visitors created in their attempts to get back into the game.

Kilsheelan started this game on the front foot and had a great chance to open the scoring in the 11th minute when the visiting keeper dropped a ball creating a goalmouth scramble that the home side were just unable to push over the line.

The home pressure paid off eventually however in the 19th minute when a throw-in was met by the head of Aaron Kiely who directed the ball into the net to give his side a well-deserved lead.

Disaster struck however five minutes later for the home side when a clearance by the keeper rebounded into the path of James Harding and his chip towards goal was handled in the box by a home defender. The outcome was that Kilsheelan were reduced to ten men and Eoin Harding fired home the resultant penalty kick to level the game at 1-1.

With the extra man advantage now, the game swung in the visitors favour and they really took over after the half-time break. Three minutes into the half they took the lead when a long throw was headed home by James Harding, and Davy Butler made it 3-1 minutes later when he was on the end of a quick breakaway to tap home from six yards out.

Cashel Town wrapped up what turned out to be an easy win seven minutes from time when they were awarded a second penalty kick that was despatched by Byrnes again.

Fresh from their Third Division Shield success, Clonmel Celtic’s seconds advanced to the second round of the Tipperary Cup on Sunday after an excellent 4-3 victory over Division Two side Kilmanahan United.

After a completely dominant opening half hour for Celtic the breakthrough finally came just after the half hour mark through livewire Deano McLaughlin who caused the visitors untold problems all game long and fired home a brilliant finish after Sean Cronin’s through ball.

All the home side’s hard work up to then however was undone less than a minute later when Connie Power’s trickery in the box and clever finish equalized for the visitors.

Six minutes before the break a Kyle Kennedy corner was turned home by Owen Lonergan to put Celtic back in front heading into the half time break, and they came back out flying adding a third goal only minutes in when Mikey Nugent played a beautiful one-two with Damon Gregory before slotting home from close range.

After this Kilmanahan threw caution to the wind and the game became a real cup tie when they pulled a goal back 18 minutes from time through a deflected Darren Guiry strike.

The visitors were on top now and got an equaliser seven minutes from the end when Guiry finished off finished off a good move down the right hand side.

The hosts fighting spirit then came to the fore and prolific striker Shane Butler did what all good strikers do when his effort four minutes from time found the net and won the game for Clonmel Celtic for the second week in a row and continues  their good form of late.

Bansha Celtic’s seconds faced Second Division side Slieveardagh United on Sunday and were on the back foot for most of the early part of the game as the Ballingarry side came with intent of ensuring that their name was going to be in the hat for the next round of this season’s cup.

The closest they came however to opening the scoring was a long range shot five minutes before the break that was clawed away brilliantly by home keeper Kevin Byrnes.

The same pattern emerged in the second period but the visitors were not going to be denied all afternoon and eventually took the lead courtesy of a wonderful free kick into top corner by Jonathon Ivors. Bansha fought back and Ryan Maher saw his effort come back off the post on the hour mark with Dylan Cummins seeing his long range shot ten minutes later brilliantly saved being their two best chances of levelling.

They were left to rue those misses though when Ivors got a second free kick in a similar position to the first and scored again with another top class effort.

The hosts did not lie down, and  pulled a goal back five minutes from time through James Scanlon. However in chasing the game  they left themselves open at the back and this was exploited in time added on when Michael Ivors made the game safe with a deflected shot beyond the home keeper.