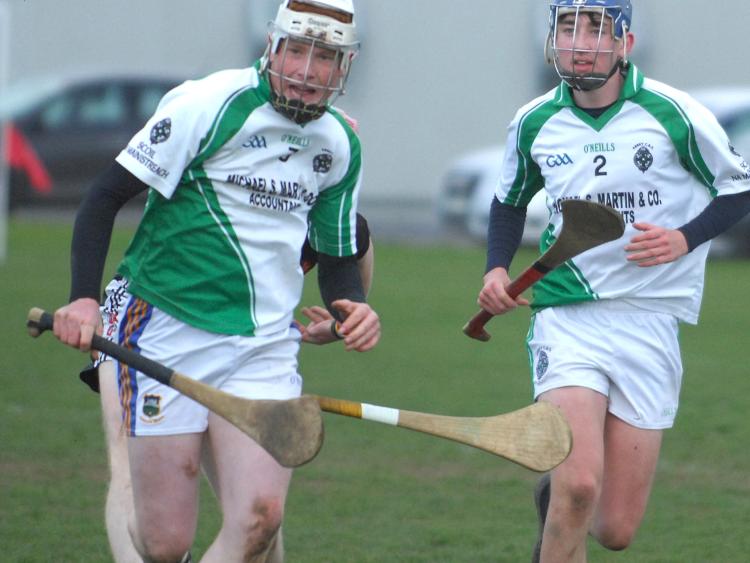 Abbey CBS 3.16
CBS Dungarvan  0-12
Abbey CBS began their Munster ‘B’ Senior Hurling Championship campaign against Dungarvan CBS recently.
This first round fixture, having been postponed the previous day took place on the astro turf surface in Pairc Ui Chaoimh, Co. Cork with a 2pm throw in.
The game started closely with both teams trying to find their feet and adapt to the fast flowing surface. Dungarvan were first off the mark from a placed ball, however the Abbey kept in touch with scores from Niall Sharpe and Tony O’ Neill. The early stages of the game were battled fiercely all over the pitch with Dungarvan edging in front 5 points to 4 with Robbie Byron settling well on the free taking duties. The turning point came mid-way through the second half when a long attempt at goal came down off the upright and Tony O’Neill was sharpest to finish to the net. This lifted the Abbey boys who responded further with points from Niall Sharpe and Robbie Byron before the always threatening Eoghan Lonergan blasted home a second goal for the Abbey men to open up a seven point lead.
At the back, the Abbey were solid all over with the full back line of Brian Roche, David Harold-Barry and Raymond Kelly winning their individual battles. Dungarvan at this stage were relying on frees to stay in touch with discipline catching the Tipperary side at times who only conceded one point from play in the first half. At this stage, the Abbey were beginning to dictate matters all over with the half back line of Jim Quirke, Jack O’ Halloran and Eoin Marnane using the ball very well and setting up excellent opportunities for scores with Donagh Hickey and Diarmuid Looby controlling the middle to ensure Dungarvan were kept at bay. The decisive moment came towards the end of the half with brilliant work coming from Jack O’Halloran attacking up the left wing to play in Michael Lowry who finished comfortably to the back of the net to leave 9 points between the teams at the break on a score of 3.07 – 0.07.
The second half played out as expected with the Abbey in control once again. Excellent work all over the field, set by the impressive working half forward of Mikey O’ Brien ensured the Dungarvan middle third never got time on the ball to set up easy scoring opportunities. Dungarvan as best they tried to get back into the game could not get any closer and had an excellent goal chance with 15 minutes remaining; however the Abbey goalie Orrin Jones was ready for the challenge pulling off a magnificent save, this along with his restarts throughout the game were crucial for the Abbey men’s success. The Abbey kept the score board operating right up to the very end with an excellent long range score from centre back Eoin Marnane and a tidy score from Conor Martin who was a real threat to the Dungarvan defence since being introduced. This ensured Abbey CBS progressed as group winners on a score line of 3.16 – 0.12 and will now face a much sterner test in the Last 16 stage against Doon due to be played in early December