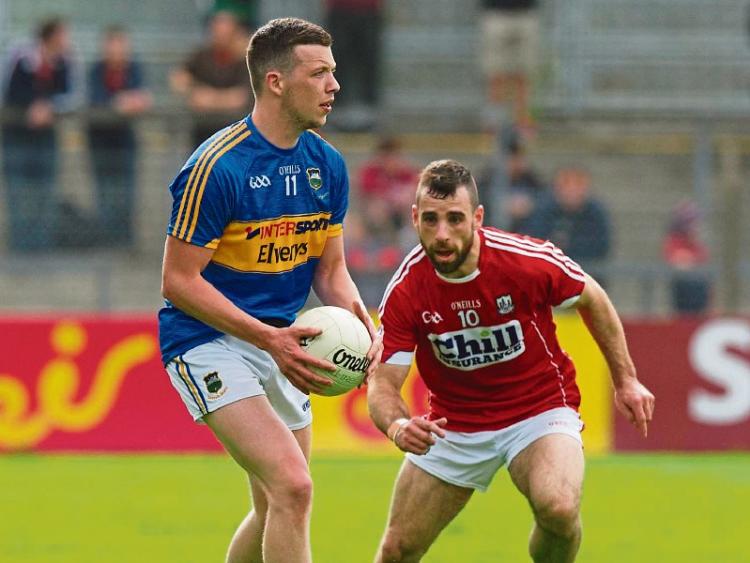 Liam Boland was Tipperary's top scorer against Cork in the McGrath Cup defeat at Mallow on Thursday evening.

There was a hugely disappointing start to the new year and the new decade for Tipperary footballers in Mallow on Thursday evening with a 14 points defeat to Cork in the McGrath Cup Round 1 game.

In what was the first competitive outing for the county’s seniors since David Power took over as manager from Liam Kearns, Tipperary took a first half pummelling from 'The Rebels' and went in at half-time trailing by 3-11 to 0-5.

In that opening period Cork totally dominated in almost every position on the field and an exhibition of clinical finishing from corner-forward Michael Hurley with a hat-trick of goals saw them virtually home and hosed with an unassailable 15 points advantage at the short whistle. In that same forgettable opening 35 minutes Tipperary failed to score from play.

Full credit though to Tipperary, they did improve in the second half – and actually shaded it by a point scoring 0-9 to Cork’s 0-8. That statistic, however, will give little joy to the management team who know full well there is a huge job of work ahead after the hangover from last year’s annus horribilis for Tipp football. Lest not forget Tipperary were relegated from Division 2 of the league and also suffered two championship defeats including the big shock of a Munster championship elimination against Limerick in Thurles. It is against this background that David Power and his backroom team has to build for the future.

Tipp's starting line-up against Cork raised a few eyebrows before the team ever crossed the white line, containing just three of the starting team from Tipperary’s championship outing against Down last June – Evan Comerford, Robbie Kiely and Steven O’Brien. In Mallow, against Cork, (who had already hammered a young Kerry side by 6-19 to 2-9 last week), half the starting Tipperary team were making their senior competitive debuts with a couple more returning to the fold after extended absences during Liam Kearns’ reign. All told it proved too much in one fell swoop for Tipperary, against, let it be noted, a totally new 15 for Cork compared to the team that had annihilated what was in effect the Kerry under 20 team days earlier.

The result means Cork advance to the McGrath Cup final against Limerick, while Tipperary’s game against Kerry in Clonmel on Sunday next is now a dead rubber. Nonetheless, it will give the home management team the welcome opportunity to go again and to try and set themselves up for a Division 3 League campaign which begins at the end of this month.

Cork started this game in business-like fashion and were 0-7 to 0-0 clear inside 10 minutes with a slick forward line being fed a world of possession stemming from the dominance of midfield pairing Brian Hartnett and Thomas Clancy.

Tipperary eventually got on the scoreboard in the 11th minute via a Liam Boland free but soon Cork had their first goal when they won an Evan Comerford kick-out and quickly fed Michael Hurley for a goal on the quarter-hour mark, ominously adding to three points he had already kicked.

Cork's second green flag came four minutes later when a huge wind-assisted kick out bounced beyond the Tipp half-back line and Cork combined through Stephen Sherlock and Colm Barrett to set up Hurley who rammed home his second from close-in for a 2-8 to 0-3 lead.

In the 30th minute another defence splitting movement by the very pacey Cork forwards saw possession pass through Colm Barrett and Mark Collins before Hurley finished by pushing the ball past Comerford for his hat-trick of goals.

It was easy to see a determination amonst the Cork players right through as competition for places hots up Leeside. Four of last year’s All-Ireland winning under 20s started against Tipp - Sean Meehan, Brian Hartnett, Colm Barrett and Peter O'Driscoll. Manager Ronan McCarthy seems to have his charges prepped early for what many Cork followers are hoping to be good times ahead again. No doubt, they will be in a hurry to get out of Division 3 and will be fancied on these two latest showings to do just that when the League commences.

At the break Tipperary and Cork introduced two and three subs respectively as Tipp became more involved and got their hands on more of the ball. Two early frees from Liam Boland were, at last, followed by Tipperary’s opening point from play which came from Jason Lonergan in the 46th minute. 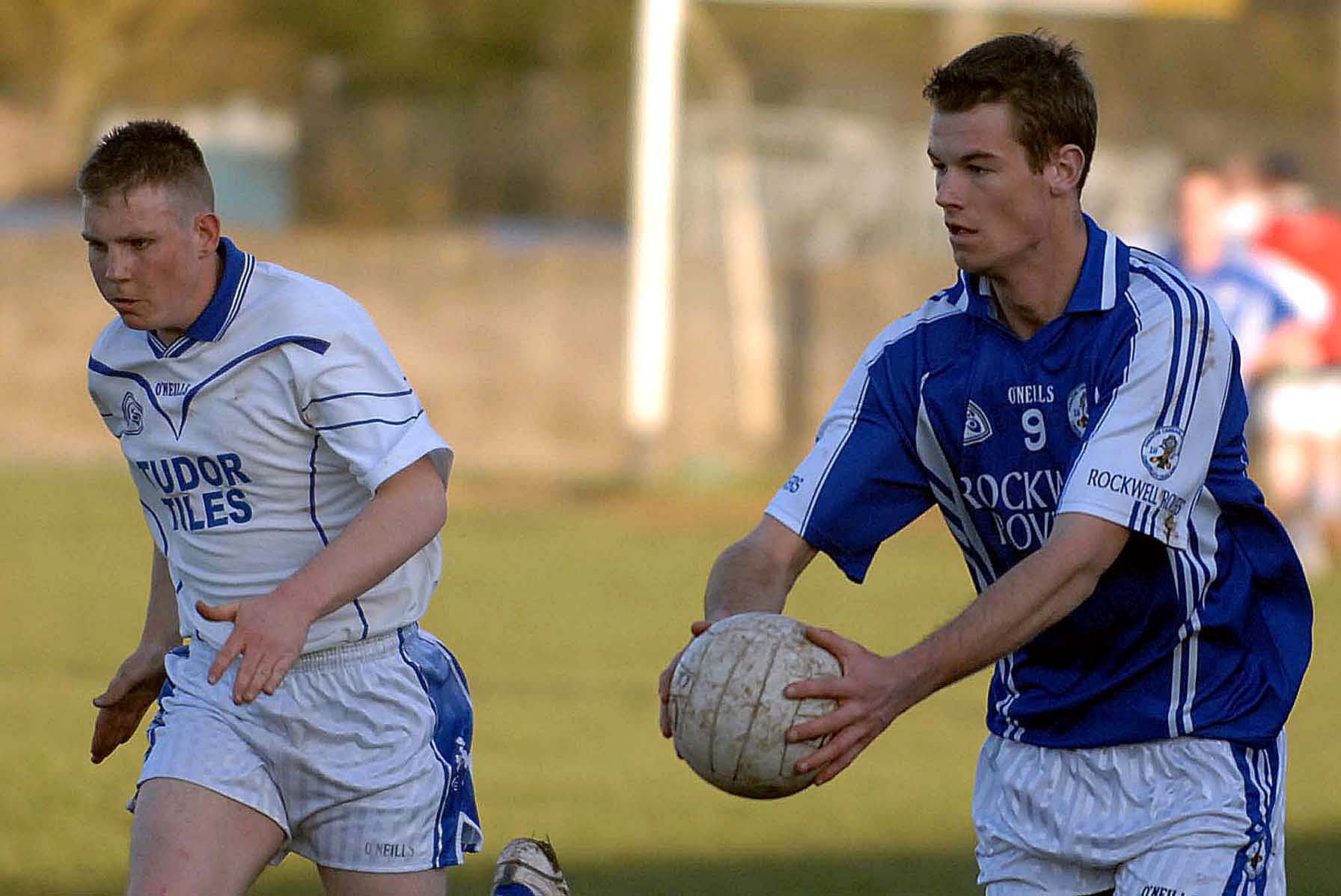 Alan Moloney made a welcome return for Tipperary senior footballers against Cork at Mallow in the McGrath Cup.

There were to be only four scores from play for Tipp over the 70 minutes, with half-time substitute Conal Kennedy, Liam Boland and Jason Lonergan tagging on the others. Alan Moloney also kicked a point from a well-won mark in the second half.

The Cork followers in the 791 attendance had most to cheer with some excellent displays in all departments. Their defence was ahead of Tipp to most balls and will be happy to have conceded so little from play. The standout players were Cian Kiely at wing-back who got forward to contribute three points, the midfield pairing of Hartnett and Clancy, the latter in particular winning vast amounts of contested duels, while up front scorer-in-chief Michael Hurley who ended with 3-4, Stephen Sherlock, Cian Dorgan and Colm Barrett tormented Tipp incessantly.

Despite the defeat Tipperary will take the lessons on board and work on the positives. A too-slow start gave their opponents the platform to do as they wished in the first half and they pretty much did just that. But the second half was a much improved showing. Young Martin Kehoe from Mullinahone, a late inclusion for flu victim Kevin Fahey, put in a good night's work at wing-back, and Rockwell Rovers' Alan Moloney also made a welcome return with a committed display at centre-forward. Liam Boland, Jason Lonergan, Sean O'Connor and Conal Kennedy also had their moments.

All in all though Tipperary were second best on the night and will be looking for a vastly improved performance when Kerry come to Clonmel on Sunday. But the McGrath Cup is there exactly for that, to give teams an opportunity to look at panels in competitive games. Tipp avoided the McGrath Cup for the last two seasons and will be hoping that their inclusion this year will pay dividends eventually. But no doubt about it, it looks like being a long road ahead for David Power & Co., after tonight’s game in Mallow.