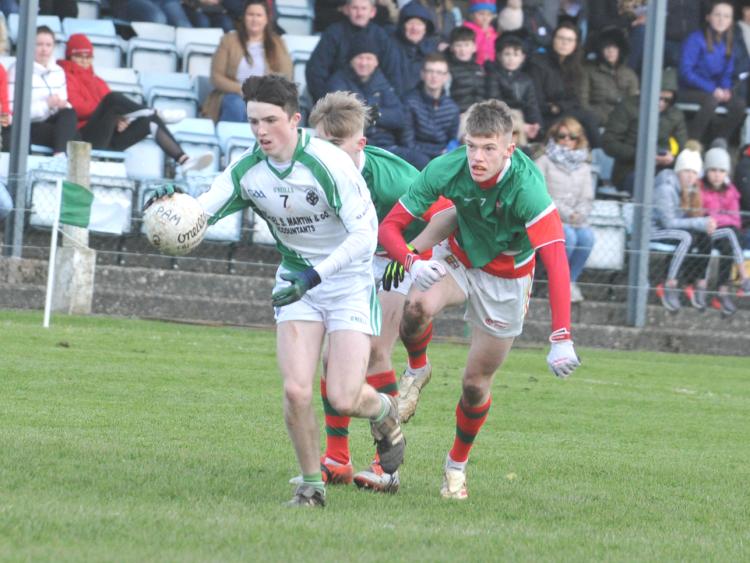 The Abbey CBS gallant effort to claim provincial glory came unstuck against a talented Patrician Academy, Mallow in Fitzgerald Park, Kilmallock last Saturday week. The Cork side got off to the best possible start when forward Barry O’Shea slipped past the Abbey rear guard to score a fortuitous goal. In the opening quarter the Avondhu men played free flowing football with Tadgh O’ Mahoney showing well but a combination of tough shooting conditions and disciplined Abbey defending held Mallow at bay.

As the half progress the Abbey gained a foothold in the game and clawed their way back into the game. Tony O’Neill and Eoghan Lonergan kicked fine scores. They were unlucky when they pulled the Mallow defence apart but Tony O’ Neills’s low drive past the advancing Thomas Hickey in the Patrician goal went just wide before the half’s conclusion to leave the score 1-0 to 0-03 at the interval

On the resumption the Tipperary Town outfit put the pressure on their opponents. Unfortunately for them, they didn’t fully turn the screw when only registering two points from the boot of O’Neill and Arravale Rovers’ Caleb Molloy Hickey.

Those missed opportunities would come back to haunt when the ever impressive Barry O’Shea fired in a breakaway goal to leave the score 2-02 to 0-05 on the 46 minute mark. The Abbey to their credit fought to the bitter end and attacked their Cork opponents in waves for the final quarter but this would ultimately lead to their downfall. Conor Corbett took advantage of a one-on-one situation and neatly tucked his shot into the bottom right-hand corner of the net.

In the closing minutes of the half the Abbey men struggled to break down Mallows blanket defence but they fought valiantly to the bitter end. While the score may not do their efforts full justice they took the game to their opponents up to the final whistle. Raymond Kelly and Brian Roche were impressive in a defence that was expertly marshalled by Donagh Hickey at centre back. At midfield Eoin Marnane worked hard and was ably assisted by Diarmuid Looby who was a huge loss to the Abbey when he was forced off injured 3mins into the second half.

Upfront they worked hard with Jack O’Halloran and Micheal Lowry’s work rate particularly impressive. Tony O’Neill showed well in the inside line and he tried to take the game to the opposition at every opportunity. Niall Sharpe who was probably the Abbeys’ standout performer on the day also contributed in attack and defence and epitomised the Abbey spirit on the day.