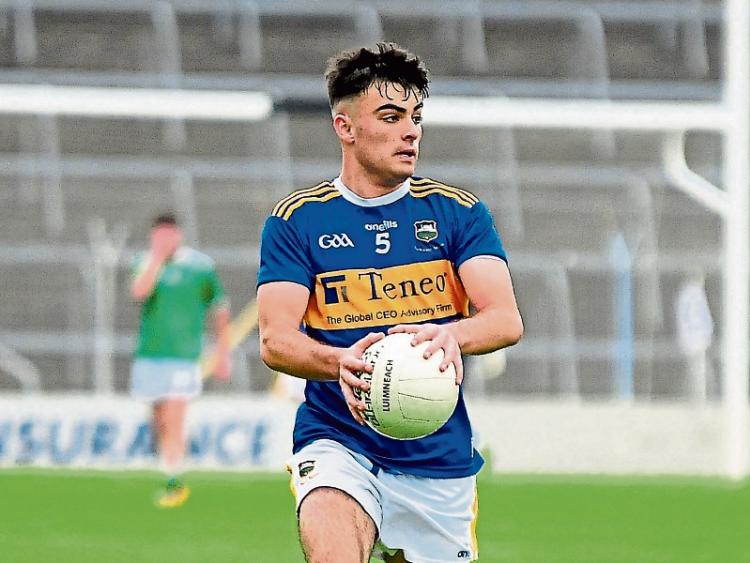 At a rain-lashed Mick Neville Park in Rathkeale on Wednesday evening, Tipperary under 20 footballers made their exit from the Eirgrid Munster Championship when losing out by a single point to Limerick.

It was a bitter disappointment once more for Tom McGlinchey’s side who suffered a similar heartbreaking defeat to the Shannonsiders at Semple Stadium last July, losing on that occasion by the minimum margin also. This latest setback continues a worrying trend for the Premier County’s footballing sides who all failed to beat Limerick in senior, under 20 and minor Munster Championship encounters in 2019.

As ever in such close championship contests where little separates the sides, Tipp will look back with rueful regret on missed opportunites and plenty of possession that wasn’t converted into scores, on an evening when scores were always going to be difficult to come by.

In particular Tipperary will reflect on going almost 40 minutes without raising a flag, from the 13th minute of the wind-assisted first half to the 22nd minute of the second, a period in which the home side turned an 0-3 to 0-1 deficit into an 0-6 to 0-3 advantage. It was this barren spell that cost Tipp most, and while they did rally bravely to force parity with two minutes to play, it just wasn’t to be their night in the end.

Two minutes into time added-on Limerick wing-back Barry Coleman proved a hero, the home town boy kicking the winning point after he gathered a miscued attempt at a 45 to break the young Tipperary hearts for the second year running.

It was a totally miserable evening weather wise in west Limerick. Back in the days when there were milk bottles in circulation you simply wouldn’t put them out on a night like this. From start to finish there was a heavy drizzle, the wind was strong and swirling, conditions underfoot were deep and the ball was soapy-slippery. It made good football very difficult, but credit to both sides they did their best to put such negatives behind them and served up a decent game in the circumstances.

And with absolutely no cover for the supporters to shelter under, it wasn’t easy on those brave souls either, the game having been moved only hours before the start from the city’s Gaelic Grounds.

Tipperary were up and running quickly with a point inside two minutes from Conor Ryan, and were two to the good shortly afterwards when Kyle Shelly pointed a free won by Adam McGrath.

It took Limerick 10 minutes to get on the scoreboard, James Cummins testing the Tipp keeper Kuba Beben who did well to touch a looping ball over the crossbar.

The score of the game came from Tipperary wing-back Mark O’Meara in the 13th minute, the Grangemockler/Ballyneale clubman kicking a rousing point from 40 metres out, towards the sideline, with the outside of his boot. Good as it was though, this was to be Tipp’s last score of the opening half and indeed until well into the final quarter of the game.

A long delivery from Limerick defender Barry Coleman was superbly fielded by Eoghan O’Mahony who pointed his mark to leave just the minimum between the sides on the quarter hour mark. The remainder of the first half went scoreless with Tipp leading 0-3 to 0-2 at the break, a margin which never looked likely to be enough allowing for the conditions.

A fruitful start to the second half for the boys in green yielded three points in the first eight minutes as they took the game to Tipperary.

An excellent long range effort from Brian Foley was quickly followed by the lead point by midfielder Rory O’Brien and it got even better for Jerry O’Sullivan’s outfit when Eoghan O’Mahony had his second mark of the evening, again fielding a difficult delivery from captain Adam Shanagher’s clearance from defence.

Ten minutes from time a close-in free from John Hayes stretched the Shannonsiders advantage to 0-6 to 0-3 and it looked like Tipperary followers were holding a beaten docket at this stage.

Loughmore's Conor Ryan kicked his second point of the night in the 51st minute to begin the comeback. A Limerick player then gifted Tipperary a close-in opportunity when handling the ball on the ground and Kevin Grogan kicked the resultant free to make it a one point game with three minutes remaining. Amazingly, a minute later it was all square when Tipp’s full-forward Sean O’Connor pulled on a ground ball for the equalising point and it was anyone’s game once again.

As the clock started the four minutes of added time Limerick were reduced to 14 men when substitute Brian Nix was red carded for an off the ball incident with AJ Willis and perhaps Tipp dreamed it might be their night after all. But alas Barry Coleman’s late point under pressure stole the show and it is Limerick who now go on to play Kerry in next week’s semi-final as Tipp exit the under 20 championship early once again.

All things taken into account this game was never going to be a football spectacle, what it was was a dour battle, full of commitment, in which Limerick deservedly came through, thanks in the main to that three point spurt at the start of the second half.

It was disappointing for Tipperary to once again come out the wrong end of a fierce battle against Limerick with last year's result still fresh and still hurting. But there has been little between these counties at underage in recent years with last year's minor encounter also a draw and the previous year Tipp only edged the Limerick minors by a point in extra-time at Newcastle West.

It certainly wasn't a night to be a forward and Tipperary's paltry 0-6 over the hour reflected that, just four of those points from play. Credit though to a well organised Limerick defence who allowed the highly-rated Tipp forwards little opportunity to do damage.

Tipperary did have some strong performances, particularly in defence, where the half-back line of Eanna McBride, Martin Kehoe and Mark O'Meara did well. Captain Darragh O'Leary was solid at full-back, while others to have their moments were Brian McKeown, Kevin Grogan and Conor Ryan.